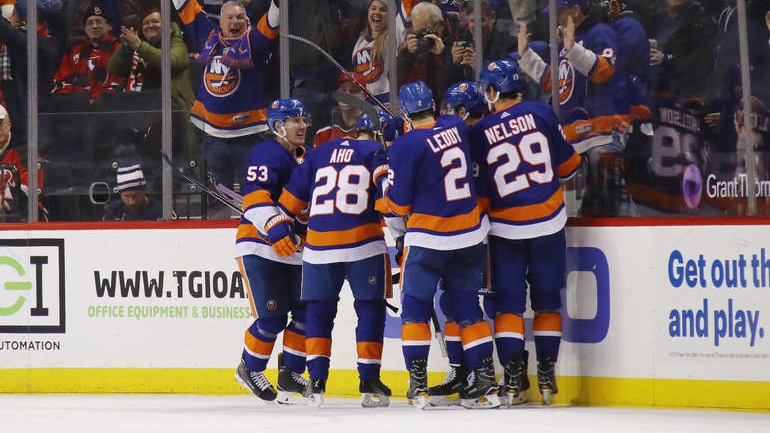 NEW YORK — The Islanders picked up their most important win to date on Sunday, snapping a five-game losing streak with a 5-4 shootout win over the New Jersey Devils.

Brock Nelson scored the winning goal in the shootout, while the Islanders offense rallied from two goals down in the third period to force overtime. Sebastian Aho scored his first NHL goal to start the rally and Cal Clutterbuck tied the game in the final five minutes.

Anders Lee and Anthony Beauvillier also scored for the Islanders in the win. New York will have a week-long break before taking on the New York Rangers on Saturday.

1. This was about as big of a must-win game as the Islanders have had this season, and they managed to pull off the win. It was a game filled with the Islanders doing some good things and some bad things, but in the end battling through the adversity to pick up their first win since December 27 against Buffalo.

2. The Islanders have not been a team that has been good defensively this season and that continued to show on Sunday. While the Islanders may have scored first against the Devils, they were severely outplayed through the first six minutes of the game, being hemmed in their own end and being outshot 15-1. The tying goal in the second period started with the Islanders turning over the puck in their own end and ended with Travis Zajac being allowed the space to pick up the puck in front of the net and score on the rebound.

This happened again later in the game on Miles Wood’s goal to give the Devils a 3-2 lead in the third. No one picked up Wood in front of the net and he was allowed to sit there to put the puck right past Jaroslav Halak on the rebound.

3. On the flip side of that, the Islanders battled through the 60-plus minute affair and were able to right the ship on several occasions. After that previously mentioned 15-1 Devils’ advantage in shots, the Islanders outshot New Jersey 9-6 through the rest of the first period and scored the game’s opening goal.

The Islanders and Devils played an entertaining second period and when the Devils took an early two-goal lead in the third New York fought back to even the score before the final buzzer.

4.  It was an unlikely Islander who contributed to the third-period comeback in a monumental way. Rookie defenseman Sebastion Aho had an impeccable performance on Sunday, scoring his first NHL goal at 7:58 of the third. He then proceeded to set up Cal Clutterbuck with a nice tape-to-tape pass for the tying goal with 4:17 left in regulation.

“It was a great pass,” Clutterbuck said about Aho’s setup. “It’s one of those things as the guy receiving the pass you know there’s a lane there. You know you’re open, but not everybody can have the wherewithal to make that play. He made a great play.  It was a window into his talent, patience and ability.”

5. Of course, the rookie was also ecstatic over scoring his first NHL goal. He called the moment something he’s dreamed of doing since he was a little boy, so the fact that he did it in a crucial spot like that on Sunday made the moment even better. Aho may have had the line of the night though when he was asked about making a name for himself, which is kind of hard to do when there is another player with the same name already in the NHL. “Trying to take it back again,” Aho said when asked about how he’s trying to make his own name.

Even better than that, Aho revealed that he’s been asked to sign pictures of “the other” Sebastian Aho before. “Sometimes I just give it back and sometimes I just sign it,” he said.

6. Aho played a big role on the offensive side of the ice, but Jaroslav Halak deserves a lot of credit for his play on the defensive end. Halak was asked to do a lot Sunday afternoon. The Islanders netminder made 15 saves in the first six minutes of the game alone and finished the win with 42 saves. His play in the first period held off an onslaught of New Jersey Opportunities and his effort in the third period, overtime and shootout gave the Islanders a chance to win.

Goaltending has been one of the Islanders big issues this season, and giving up four goals looks bad on paper, but take Halak out of that net and the Islanders win may not have been possible. Heck, maybe his emotional outburst following the Devils’ fourth goal even gave a little spark to the Islanders.

“He was good after he beat the heck out the post with his stick,” Islanders coach Doug Weight said. “I think the guys feed off that emotion. It’s probably pent up on him… Just a great, really aggressive, confident effort and we’re feeling it.”

Both players contributed on the scoreboard, with Beauvillier scoring

8. The Islanders sent down Aho, Beauvillier and Tanner Fritz to the AHL following the game, but don’t read anything into that as an indictment int their play. The Islanders are likely looking to get them more playing time this week while the NHL club goes through its bye week. The Bridgeport Sound Tigers have two games this week (Wednesday and Friday) and will practice all week.