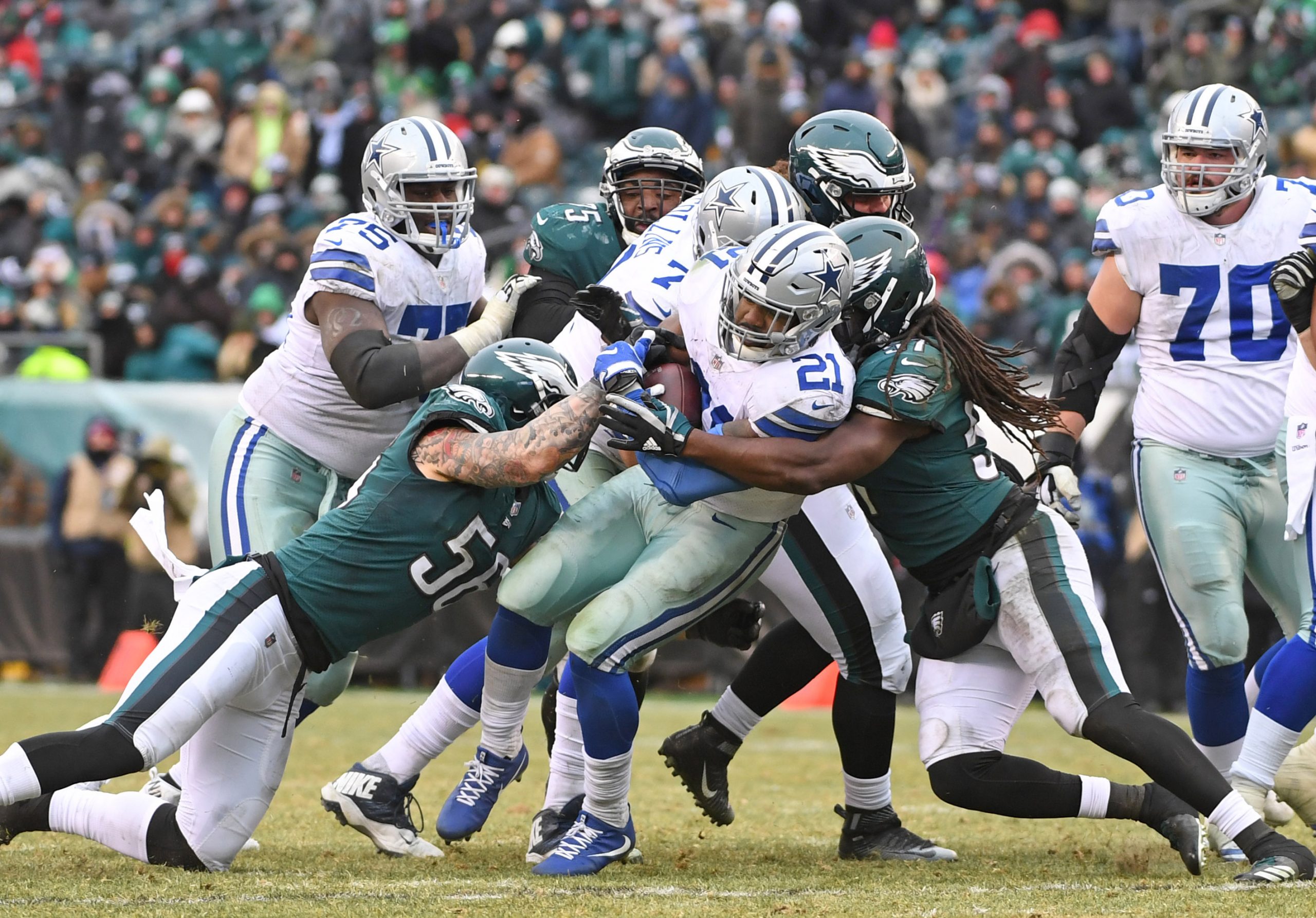 EYE will not over-react to the hype of the so-called rivalry between the Cowboys and the Eagles.  The mystique of the feud between Tom Landry and Buddy Ryan has long been forgotten by today’s young players and coaches.  The modern NFL is a fraternity and this is just another game that matters more only if the two teams end up in a tie-breaker scenario for playoff implications in January. Fans make a bigger deal out of it than it really is—players know this is simply a snapshot of two teams in the same division which are imperfect works in progress.

This game would be different if a healthy Dak Prescott were playing, but the Cowboys still have a path to victory with Cooper Rush under center. The Dallas defense is no joke and will keep this a low-scoring game. If the Cowboys can run the ball effectively and shorten the game, they’ll have a chance to steal one on the road. Still, the Eagles are a more complete team this week and should have enough to pull out a sixth straight victory.

Patrick Walker’s take from Dallas Cowboys media room: “It goes without saying that this matchup will be an exciting one, and easily the most important test for the Cowboys after seeing them defeat the reigning Super Bowl Champs in Los Angeles last week. The defensive front in Philly is one of the best in the league, even more so than that of the Rams, and that means Cooper Rush better keep his head on a swivel in what might be his final start of the 2022 season. The medicine for keeping the Eagles pass rush at bay will be leaning heavily on Ezekiel Elliott and Tony Pollard, and that will mitigate the number of pass attempts and, as such, the number of opportunities for mistakes against a secondary that is really good at taking the ball away.”

Defensively, the Cowboys must delete the ability of Jalen Hurts to run the ball, and that includes in the pass game when he escapes pressure and extends plays downfield. He’s not lighting up the scoreboard this season as a passer, so force him to prove he can beat you by throwing 40 times – helping Micah Parsons and the elite pass rush around him to have that many more chances at burying Hurts. I believe the defense will shut down yet another “high-powered” offense; but I think Rush’s luck might run out and those INTs he’s nearly thrown this year show up with a critical one that decides the game for Philly (setting the stage for a Cowboys revenge game on Christmas Eve). Prediction is 16-10, Eagles…

At least the Eagles will have all their starters back on the offensive line, whether they are 100% healthy or not. Despite being limited in practice earlier this week, Jordan Mailata, Jason Kelce, Landon Dickerson, and Isaac Seumalo are ready to go.  Also, Avonte Maddox and Jake Elliott are set to play.

Patrick Johnson is also notably listed without an injury status after missing last week’s game due to a concussion. He’ll return as the backup SAM linebacker behind Haason Reddick.

The big news in Dallas is that CeeDee Lamb is now questionable to play after being added to the injury report on Friday with a hip issue. Not an ideal development for the Cowboys. even if their leading receiver is able to play. Jason Peters was limited in practice all week and seems to think he’s going to play despite being ruled questionable. If he does suit up, he’ll take rotational snaps at left guard against his former team.

Dak Prescott (thumb) is also questionable. All indications point to him missing this week’s game and returning next week.

Dallas did a good job against Smith in the Week 3 matchup last season, limiting him to 3 receptions and 28 yards with Diggs having primary coverage responsibility. A big-play cornerback who had 11 interceptions, two returned for touchdowns in 2021, Diggs has two picks in five games. He is also not giving up the big play, as was sometimes the case last year, so in his third season, Diggs has become one of the NFL’s top cover players. He and Anthony Brown have to work against not only Smith, who is coming off a 10-catch game in Arizona, but also against A.J. Brown, who can do it all. This is a key matchup as the Eagles look to establish the passing game. The offensive line and pass-pro backs have to give quarterback Jalen Hurts time to throw the ball and Hurts has to be on point against two sticky cornerbacks who are aggressive, confident, and very sure in their assignments.