The controversy over an incident that occurred at the Rockies’ Coors Field on Sunday August 8th of this year has created justifiable concerns over MLB mascot names.

A fan yelling at the Colorado Rockies mascot “Dinger” during the game with the Miami Marlins was apparently misheard by a number of fans and Rockies officials as shouting derogatory racial epithets. It was initially perceived that a Colorado fan was yelling the epithets at Marlin’s outfielder Louis Brinson, who is Black. 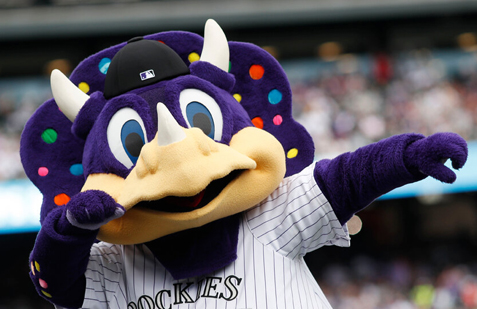 An investigation determined that the fan was yelling at “Dinger”, a purple dinosaur with polka-dots, trying to get the mascot to come over to his section so he could take a photo with the popular creature.

While it was great that Rockies officials immediately responded to the incident, and a welcome relief to discover that no racial slurs were yelled at the game, it’s almost guaranteed that similar misinterpretations will occur in the future.

A brief survey of other baseball team mascots shows that same misunderstanding that occurred in Colorado could also happen at any number of ballparks around the country.

The scraggly mascot of the Pittsburgh Pirates’ “single A” semi-affiliated Gruntpokers team is named “Itch”, which represents the old saying about ballplayers “itching” to play the game.

And while that is admirable, there is a great potential for verbal misunderstandings that would be highly objectionable to female fans, as both Poker and visiting team supporters shout to get the red-colored, multi-legged insect’s attention during games.

Another minor league baseball mascot, “Motor Trucker”, is named to honor the men and women who transport goods across our great Interstate Highway system in massive ten-wheel vehicles.

But it is not a stretch to imagine that baseball fans, especially after imbibing massive amounts of stadium draft beer, could easily be accused of using objectionable language when they are simply requesting the eight-foot-tall mascot turtle to visit them at their seats.

One of the most obvious baseball team mascot names that should immediately be reviewed is “Prick Bastard”, who represents an unaffiliated “triple A” club outside of Boston. The hairy gnome-like creature was apparently named for a previous team owner who charged players for vending machine food spreads after each game and supplied uniform shoes with inexpensive cardboard cleats.

Thanks to Prick Bastard’s aggressive antics, by the 7th inning of most home games the general language inside the stadium has been described by local religious leaders as “much like that of a 1930s Kansas City whorehouse saloon, only worse”. Let’s hope that recently exonerated “Triple A” Baseball Commissioner William “Bull” Merde takes a hard look at this extremely offensive mascot situation in the publicly funded Pantysniffer Stadium.

While there are any number of other seriously pressing issues clogging the progress of professional baseball, it’s time that a comprehensive mascot-naming review process trickles down to the top of that to-do list.