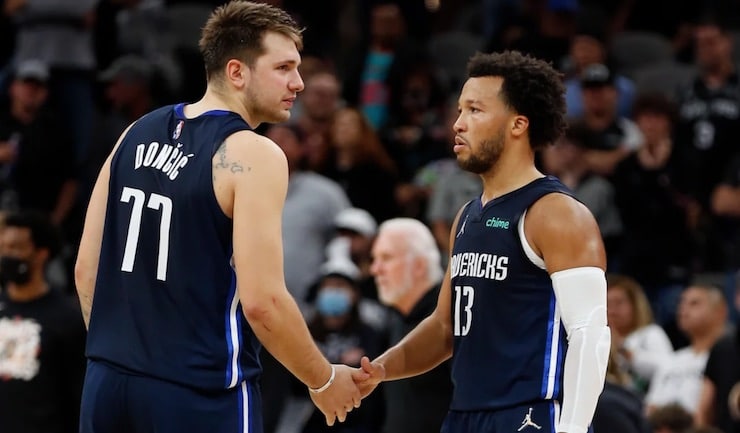 Former Dallas Mavericks guard Jalen Brunson signed a free agent deal with the New York Knicks. With Brunson in NY, Luka Doncic’s NBA MVP odds improved by 29%. Doncic opened as the betting favorite with +550 odds but has seen his 2023 NBA MVP odds shorten to +425 at the best US sports betting sites. Below, we’ll go over how the Brunson deal affects Doncic’s NBA MVP chances next season.

Jalen Brunson cashed in on a productive postseason by signing a four-year, $110 million deal with the New York Knicks.

The former second-round pick averaged 21.6 points, 3.7 assists, and 4.6 rebounds in 18 games during the NBA Playoffs with the Dallas Mavericks, leading the team to a first-round series win over the Utah Jazz without star Luka Doncic.

Doncic opened the offseason as the odds-on favorite to win the 2022-23 NBA MVP Award.

With Brunson taking his talents to the Big Apple, Doncic has become an even bigger favorite to win the 2023 NBA MVP Award.

The Mavericks star has the best chance of any NBA player to win the 2023 MVP Award.

He’s followed by Joel Embiid, who has a 12.5% chance to win the NBA MVP, according to the betting odds at the top online sportsbooks.

Brunson’s deal will leave even more offensive touches in Dallas for Doncic, who should sport one of the league’s highest usage rates next season.

Sports bettors seemed to take notice, as money started to pour in on the Mavericks’ star following the start of free agency.

With a clear path to putting up huge numbers, Doncic saw his NBA MVP odds shorten from +550 to +425 at BetOnline, one of the best NBA betting sites.

While Doncic might put up some huge numbers in 2022-23, his efficiency has held him back from the MVP conversation.

Last season, Doncic ranked 17th in the NBA in estimated plus-minus and he remains an inconsistent 3-point shooter at just 35 percent.

He will need to improve those numbers to take the leap over players like Nikola Jokic, Giannis Antetokoumnpo, and Joel Embiid.

However, Doncic has also shown the ability to take his game to another level during the postseason. In 28 career NBA Playoff games, Doncic has averaged 32.5 points per contest. With that being said, it’s hard to believe that we’ve seen the best from Doncic during the regular season.

Look for Doncic to put up some MVP-caliber numbers next season in Dallas.