Jalen Ramsey throws shade at JuJu Smith-Schuster ahead of matchup 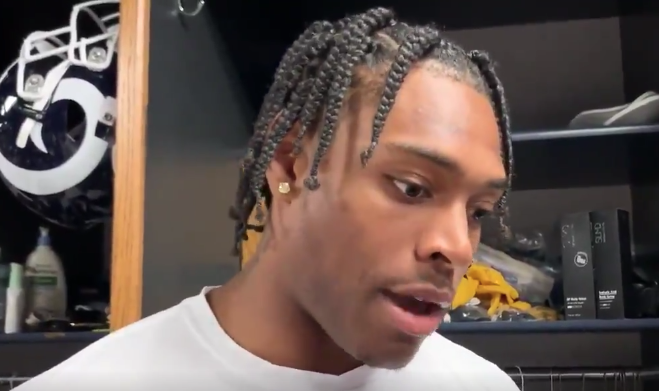 The Rams and Steelers are set to square off in an epic matchup on Sunday, and cornerback Jalen Ramsey has already added some intrigue to the game.

Ramsey figures to be shadowing Steelers receiver JuJu Smith-Schuster, but he doesn’t seem to be worried about it.

Not only that, he went on to explain why, in comparing Smith-Schuster to former Steelers receiver Antonio Brown.

“No disrespect to him, but he’s not Antonio Brown,” Ramsey said of Smith-Schuster, via a video from Lindsey Thiry. “He plays very physical, he plays strong, aggressive through the catch.”

Ramsey also went on to say he’s motivated squaring off against the league’s “top” receivers, but didn’t appear to believe that Smith-Schuster is one of them.

“No disrespect to him, he’s not Antonio Brown,” Jalen Ramsey says about JuJu Smith-Schuster, who he’s expected to match up against Sunday. However, Ramsey says he likes Smith-Schuster’s style of play. “He plays very physical, he plays strong, aggressive through the catch.” pic.twitter.com/N9KIvovcKd

JuJu will clearly have some added motivation for Sunday’s matchup. Still, Ramsey does have a point, as Smith-Schuster hasn’t produced at the level a true No. 1 receiver does, and clearly benefited from having opposing defenses roll coverage to AB on the opposite side of the field.