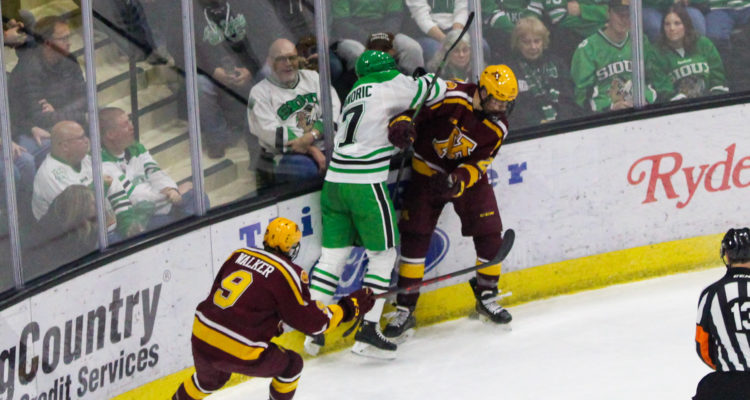 Tonight, University of North Dakota defenseman Chris Jandric will be watching the game from the stands. The graduate defenseman has been suspended by the NCHC.

Brodzinski wasn’t injured on the play, and he would go on to score a hat trick and lead the Huskies to a 8-1 victory.

“If we want to be a good team, we got to make a decision what we want to be, and it can’t be team that takes five-minute majors every game,” Berry said.

Here’s the official release from the NCHC.

During Friday night’s game, Jandric was assessed a major penalty for spearing and given a game misconduct penalty at 14:57 of the second period.

Jandric will be required to serve the one-game suspension during UND’s series finale tonight at St. Cloud State. Jandric is eligible to return for UND’s series opener at Colorado College on Friday, Dec. 10.

Here’s the video of the play in question.

Starting around 2018-19, the NCHC would suspend a player 1 game. Before that, spearing to the abs/groin was deemed “a hockey play” by NCHC admins (true story). Who knows if they are still actually still suspending for this type of play given the lack of suspensions this yr. pic.twitter.com/FAE0KAnj6d