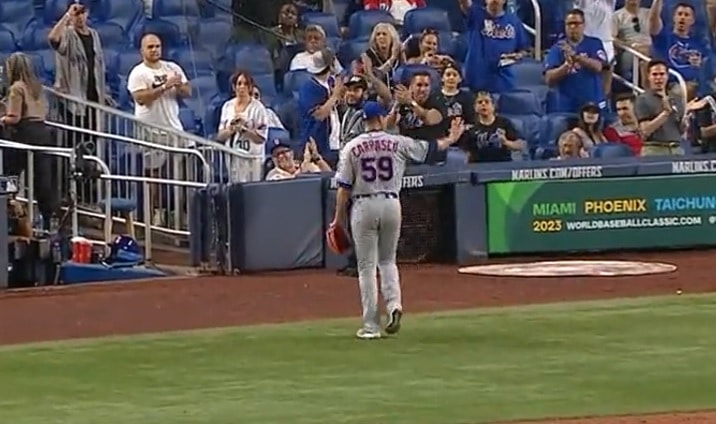 … and neither are the Houston Astros, which was a huge relief to Mets fans who have seen Marlins walkoffs time and time again, and to Carlos Carrasco who has been far away from his Kryptonite for a while now.

Carrasco shut out the Marlins for 7 and 2/3’s on 93 stress free pitches, and Seth Lugo finished the Marlins off for a 4-0 victory to continue a winning streak which now stands at five. Cookie has an ERA of 0.90 in 30 innings since the Astros debacles, with Saturday night being his piece de resistance (if I spelled that wrong, well I goofed off in French class.) The Mets got all they needed offensively on a Jeff McNeil dinger in the third off of Nick Neidert (who you may think is related to Jim “The Anvil” Niedhart, but I can report that it isn’t the case.) But for good measure they got an RBI single from Francisco Lindor later in the inning, and then this moonblast in the 8th …

That ball is going to land at a South Beach dinner spot at about 2AM (provided Cecil f***ing Wiggins isn’t driving tonight.)

J.D. Davis then hit a tape measure blast that made it 4-0 and broke Paul Severino …

The absence of Josh Willingham (and Todd Dunwoddy, Robert Andino, Dan Uggla and Casey McGehee), ensured that this game wouldn’t turn into a Miami disaster, and kept the Mets on their path to the playoffs which, right now, is just not to completely fall apart and/or have Fred Jones reveal that Steve Cohen was actually Ray Ramirez all along (“and I would have gotten away with it too, if it weren’t for you meddling HIPAA laws.”) The Mets are doing their part to win ballgames while the Braves are in the two month part of their schedule that more closely resembles Duke’s non-conference basketball schedule than the National League. They defeated Bellarmine (I mean, the Diamondbacks) 6-2 to remain three back of the Mets as we head towards their momentus five game series next week at Citi Field. Jacob deGrom will pitch in one of the games of the Saturday doubleheader, but not before he makes one final minor league rehab start against the Nationals on Tuesday. (If they trade Juan Soto to the Padres, it will sure as hell be a minor league rehab start.)