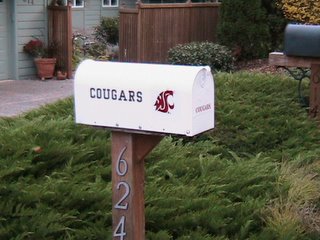 First of all, THANK GOD I can back out of the driveway for another year without seeing my wife’s f’ing Husky colors on the mailbox. There were other rewards from this years bet, but this is a family blog. Let’s just say that the Husky was well trained and did what it was told.

I watched the game with a guy “in the know” with the team. Hawk you probably know who I’m talking about. I got a lot of interesting info out of him but the following is what I remember.

1) He hung out with the team at their hotel on Friday night before the game. He said Harrison was jacked up and had discussed that he might tell the media after the game how disappointed he was that Swogger didn’t start this year. It was probably a good move that he didn’t do that.

3) If I wasn’t so late at getting this post out I would have been the one breaking the news that Swoggs is heading elsewhere. As a matter of fact, “in the know” guy had Swoggs cell number and left him a voice mail after the game while we were sitting around.

4) Christian Bass and Odell Howard are useless. Apparently in the USC game Howard was told he was going in on the next series. Howard told them that he didn’t want to and didn’t go in. Also Don Turner has a long ways to go to being a reliable guy next year. Scott Selby is not going to be the next Scott Lunde. Shelton Danzy is a good kid, was good for recruiting but will probably never see much time on the field. There were a few other names that I can’t remember now.

5) In case you haven’t figured it out, and we really haven’t talked about him much, Brackenridge was a huge loss to the team this year. Especially on Special Teams.

6) “In the know” guy loves Cory Evans and Trent. Expect big things out of those guys.

7) It was like you talked about Hawk, watching films and reviewing decisions made by both Brink and Swoggs is what got Brink the job. Swogger just made more mistakes/bad decisions than Brink.

Sorry I don’t remember more but it was an interesting day talking to that guy. He had lots of great stories! If I remember more, I’ll get it posted.