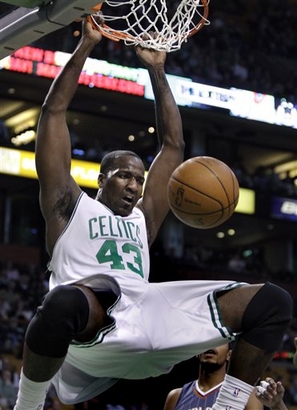 Former NBA champion and current NBA analyst for ESPN, Kendrick Perkins, has decided to make money in other ways outside of basketball. The hilarious analyst certainly has enough money to do his own thing, but his new business is forming a way for him to make money and bring dogs to people around the world.

Perkins and his brother law Thomas Alpough are both in the business together. But, it took Perkins a little convincing before he decided to join the business.

The dogs ranged from $8,000 to $20,000 apiece when they first started their business. According to the NY Post, Perkins and Alpough have been finding success in breeding dogs.

“I need you to post this on your Instagram. Let’s start it up. I don’t need money from you. And we’re going to sell them,” Alpough told Perkins.

“I was like ‘OK, you really getting money right now,’” Perkins said. “Now he had my attention and I’m all the way in.”

“Originally, Frenchies started, and there were black and white Frenchies. Then, all of a sudden, they started coming out with lilac Frenchies, that were bluish-white, with polka dots and things of that nature,” Perkins said. “Then you have the Merles [which resemble Dalmations’ patterns]. But now you have fluffy Frenchies, which are high-dollar. Fluffy Frenchies have fur, different colors, it’s the new wave. Those dogs start out at $100K-$150K.

“We started developing relationships. I started learning more about the DNA, the color, the structure — the things that people want. And now we’re to the point where we actually have dogs that are in our kennel that are worth $250K, $500K — and we even have one that’s worth $1 million.”

New feature at @nypostsports: I talked to @KendrickPerkins, former NBA enforcer and current star analyst at ESPN, and his partners about their multi-million dollar business breeding some of the cutest dogs you’ll ever see https://t.co/DLoFYJsw2L

Perkins has been seen on his social media hanging out with some of his beautiful dogs. It’s easy to see why people are falling in love with them.