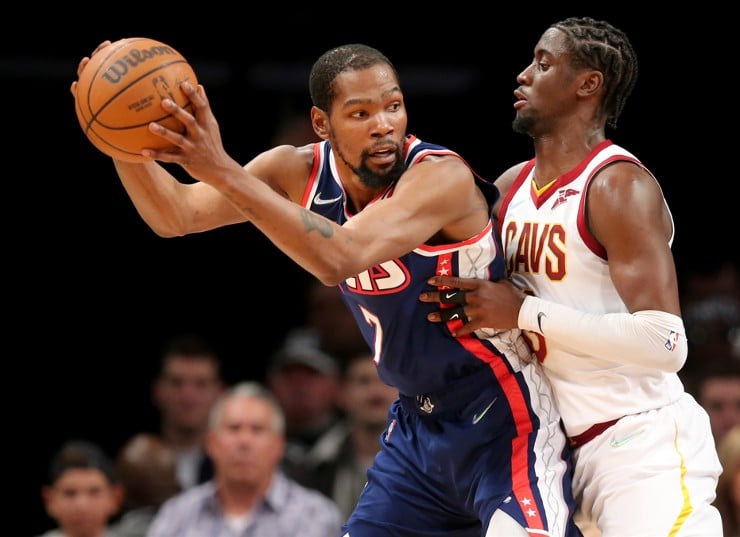 Kevin Durant signed a four-year, $164.25 million contract with the Warriors as part of a sign-and-trade deal with the Nets in 2019; Kevin Durant next team odds are featured here. Then, the 12-time All-Star voided his player option, and he decided to sign a contract extension with the team on Aug. 8, 2021. While he is set to earn $46,407,433 with Brooklyn for the 2022-23 season, Durant’s future is unclear.

According to BetOnline oddsmakers, if Durant were to seek a trade soon, the Heat have the best odds (+250) of landing the two-time MVP. And if the Nets ever decided to trade their best player to the Western Conference, the Grizzlies possess the next-best odds (+400) of acquiring Durant. If the Nets move on from Kyrie Irving, it’s possible that the four-time scoring champion will want out. Check out the full next team odds list below.

Kevin Durant Next Team Odds for the 2022-23 NBA Season

Furthermore, in the 2021-22 regular season, Durant averaged 29.9 points, 7.4 rebounds and 6.4 assists per game. The 15-year veteran also shot 51.8% from the field and 38.3% from 3-point range. Considering he turns 34 in September, would one of the top 3 teams listed below make a move for Durant this offseason? Heat general manager Andy Elisburg could make a move in the coming weeks. Kevin Durant next team odds are below.

First off, the Heat finished 53-29 (.646) last season. As the top-seeded team in the Eastern Conference, expectations were high for them in the 2022 NBA Playoffs. The Heat went on to beat the Hawks in five games during the first round. Then, they defeated the 76ers in six games in the second round. It took a seven-game series for Miami to lose down the stretch.

In the 2022 NBA Draft, the team selected Nikola Jokic at No. 27. Their second-round draft pick was forfeited after they were caught tampering with Kyle Lowry in 2021. So, do the Heat need Kevin Durant? Not really. However, Durant would give the Heat the extra push they need to make it back to the NBA Finals and win. Miami has roughly $130.4 million for salaries next season.

Next, if Durant was traded to the Grizzlies, the team would finally be capable of challenging the Warriors. Despite finishing 56-26 (.683) in the regular season, ranking second overall in the Western Conference, they lost to Golden State in the second round of the playoffs. If not for Ja Morant’s injury in the fourth quarter of Game 3, maybe Memphis could have pushed the series to seven games.

Anyway, during the 2022 NBA Draft, the Grizzlies traded up to select Jake LaRavia at No. 22 and picked Vince Williams Jr. at No. 47. Not to mention, De’Anthony Melton was traded to the 76ers. It would be a tougher road to the NBA Finals for Durant in the West, but Memphis has the talent to compete with Golden State. That is a crucial point the Slim Reaper will consider this offseason.

Moreover, the Hawks round out the top 3. Of the three teams listed, the Hawks make the least amount of sense. They have disappointed fans for years. In the 2020-21 season, they made it to the Eastern Conference Finals, where they lost to the Bucks in six games. It was the furthest Atlanta had gone in the playoffs since the 2014-15 season.

Furthermore, head coach Nate McMillan is not the long-term answer for the Hawks. In the 2022 NBA Draft, the Hawks selected AJ Griffin at No. 16. He played small forward at Duke. If Durant wants to win another ring, he’s better off demanding a trade to the Heat or Grizzlies.

Realistically, Nets G.M. Sean Marks would probably never want to trade his star player to an East contender. For that reason, considering the Hawks are struggling, maybe G.M. Landry Fields could make a play for the two-time champion. Other articles related to “Kevin Durant Next Team Odds” are on the main page.

BetOnline is one of the best sportsbooks in New York and Florida.

NBA Betting Offers | Heat are the No. 1 favorite to become Kevin Durant’s next team