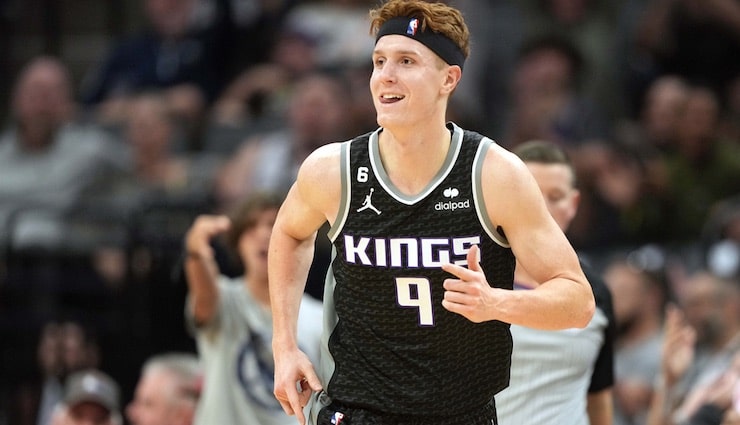 Kevin Durant saw how explosive the Sacramento Kings’ offense can be in a 152-121 loss against them on November 15.

The 153 point effort from the Kings’ was only one point shy of the team single-game record since the team moved to Sacramento in 1985. Kevin Huerter was on full display that night nailing five 3-pointers and finishing with 19 points on the night.

In a podcast episode of “The ETCs”, Durant commented on Huerter’s play, comparing him to Steph and Klay.

Durant Says Kevin Huerter is playing like Steph and Klay

On a recent episode of his podcast “The ETCs” with Eddie Gonzalez, Durant said that Hueter is playing like Klay Thompson and Steph Curry. He goes on to say that the way Huerter is shooting the ball right now is something you’ve got to watch.

Durant told Gonzalez, “the way he’s coming off the hand-off and shooting the basketball right now … if you’re not a basketball fan and locked in on the league, you’ve got to watch how Kevin Huerter is shooting this ball right now”.

The Brooklyn Nets star even said that the Sacramento Kings are a tough team to play with the way Domantas Sabonis and Huerter are playing right now.

In five of the Kings’ 15 games this season, Huerter has hit five or more threes in a game. The young shooting guard is putting up career numbers in his first season with the Kings, averaging 16.6 points per game and 49.5 percent shooting from beyond the arch.

The Sacramento Kings are the real deal according to Durant. Right now the Kings’ lead the NBA in points per game (121.4), true-shooting percentage (62.1), effective field-goal percentage (58.5) and offensive rating (118.6).

While their defense needs a little work, ranked the 27th in the league, the Kings were red-hot riding a six -game winning streak for the first time since 2005.

The combination of Sabonis, De’Aaron Fox and Huerter makes for an exciting and electric offense.

Huerter caught wind of the Durant episode and responded to the comments saying “Wild! One of the Greats!”.

While the Kings will need a lot from their core to make it in the west, one thing is for sure, Sacramento is here to play.