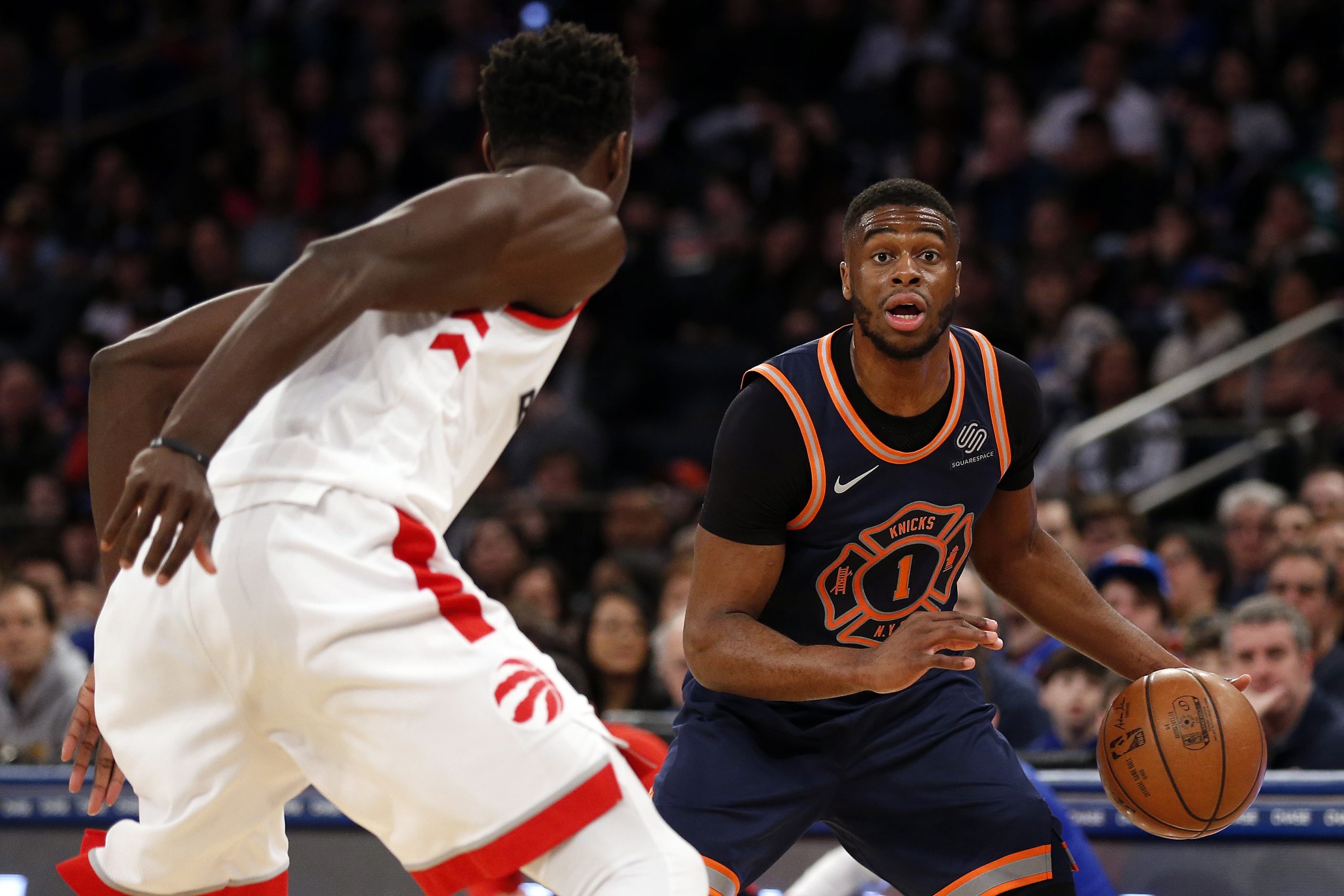 The Knicks went toe to toe with the Raptors on Sunday afternoon, keeping their deficit with single digits before the third quarter of doom arrived and Toronto really opened things up. In what has become an all too familiar trend for New York, their opponent put the game out of reach mere minutes after the second half began. But alas, the Knicks had a lot to proud as they returned home from a long road trip, despite the 132-106 defeat.

Over the course of this horrid losing streak, it’s safe to say that the front office can’t be all that surprised. Instead, this newfound transition, centered around the hope for a higher draft pick and the development of young prospects, comes with the understanding that the losses will pile up. Still, it would make sense that head coach Jeff Hornacek wants his guys to show some fight along the way and that the players get frustrated if such hunger isn’t easy to spot. All that said, if there were ever a loss that a rebuilding team could have been content with through and through, Sunday’s matinee proved to be it.

In addition to snapping the Rockets’ seventeen game winning streak recently, the Raptors now stand as the Eastern Conference’s top team. After years of making tweaks and hoping for a foundation of better chemistry, this appears to finally be the year where they could legitimately challenge a team like Houston or the Golden State Warriors and contend for an NBA title. With the Cavaliers taking on obstacles of their own, the path in the East seems rather clear for Toronto.

The Raptors have had a tremendous campaign and the Knicks most certainly have not. Nevertheless, the Knicks competed mightily and saw a promising spark from a number of their youngsters along the way. Luke Kornet started in place of an injured Enes Kanter and made the most of his early minutes, scoring 7 first quarter points. He did commit two fouls, but for a player who’s only been gracing an NBA hardwood for merely a month at this point, such growing pains and an overzealous nature are to be expected. As the game continued, Kornet proved to be confident enough to throw up the long ball as the Toronto defense gave him enough space. He had no hesitation and that was refreshing to see. He was very active and finished with 18 points.

Kornet’s 18 were second on the team to only Tim Hardaway. En route to tallying 25 points, Hardaway Jr. looked increasingly comfortable as he continues coming (back) into own as a primary scorer of this squad with Kristaps Porzingis sidelined. The swingman is always going to be a little streaky on offense, but he’s making better decisions and being assertive as of late. Hardaway Jr. can certainly create his own shot, but it didn’t hurt that Emmanuel Mudiay is finding it more natural to look for his teammates, both in transition and on the low block. Instead of forcing his own offense with flat-footed jumpers, the 22 year is finding a balance between converting on high-percentage looks and giving it up to those around him. The floor general added 13 points and 5 assists, while only turning the ball over once. His playmaking ability has taken the pressure off Frank Ntilikina. The Knicks’ raw backcourt held Toronto’s all-star duo of DeMar DeRozen and Kyle Lowry to 7 of 24 shooting, including 2 of 10 from deep.

Of course, there is strength in numbers and there’s no doubt Toronto is confident going thirteen deep into their rotation. 11 out of 13 dressing players played 12 minutes or more, with 12 players scoring at least 6 points. While New York was able to slow DeRozen and Lowry down, Jonas Valanciunas was physical around the hoop and found his way to the charity stripe a game-high of 10 times, leading Toronto with 17 points. Kornet still has a lot to learn defensively. The Raptors’ big man led seven players in double-figures. Every which way the Knicks turned, there was another player to cover and the defense just couldn’t spread itself wide enough.

A loss to a legitimate championship contender is to be expected, but the Knicks should be able to hang their heads high enough after this one. Hardaway Jr. is gaining his confidence back, and youngsters like Mudiay, Kornet, and Ntilikina are showing progress. That should be the benchmark for success the rest of the way.