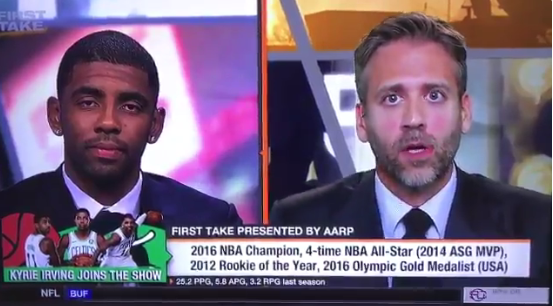 Kyrie Irving joined First Take to answer questions about his departure from Cleveland.

Yes, he dodged some of the questions… but he more so answered them in a very Kyrie way. Like this exchange about why he didn’t tell LeBron about his trade request.

Now, the internet cut it off after the “do you care about that at all?” “no.”

Savage shit, right? Yes, in that short clip it is.. except he continues and makes a great point about what you owe someone in this process. There’s no reason for him to talk to LeBron or report his intentions to LeBron.

How many of you announce your job searches to your coworkers?

Then he’s asked about the “wanting your own team” report. Again, there are short clips you can take from it to make it sound a little different out of context.

Saying “I have a presence and aura about me that’s very reality based” is a pretty funny line, and I’m sure “reality based” will be a huge Twitter joke.

There are things Kyrie isn’t saying. It’s obvious he feels slighted about something in Cleveland. It’s also obvious that he and LeBron aren’t close friends.

There is no more damning quote in this appearance that that right there.

Beyond anything else, Kyrie felt personally stagnant. We’ve said since the trade went down that the franchise stability is new for him. He’s got a top-to-bottom system that, aside from maybe some shifting in the assistant coaches, is expected to stay in place for the foreseeable future.

To his credit, seeking out a situation where he wants to be pushed is a pretty grown-up thing to do. We, myself included, get caught up in the macro view of Cleveland’s situation; LeBron is still the best player on the planet, they have the best chance of beating Golden State, and since nothing in a fan’s mind is more important than championships, it’s an indictment of Irving to want out of that.

But if he’s not happy and he doesn’t feel like he’s going to grow, then it’s his right to want out. Cleveland could have told him to F off and show up for camp like he’s contractually obligated to do, but they instead made a deal.

To him, the rest of this seems to come off as noise… especially when it comes in the form of a very long-winded question from Max Kellerman.

Get to the point, Max.

Kyrie Irving is obviously comfortable with his decision. His look often looked like a cross between bored and smug. Look at his answers, though, and you’ll see more of why he felt compelled to leave what most would consider a good situation.

Whether you liked his answers or not… there’s no doubt that Kyrie is going to be interesting to listen to moving forward. He puts a lot of thought into his answers… even though some of those answers go down an unexpected road.