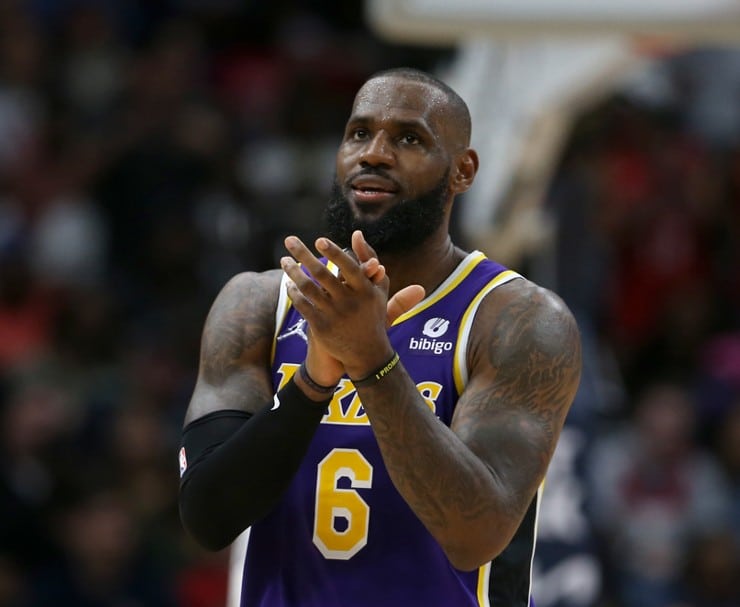 LeBron James next team odds are available if the Lakers decide to move him this offseason, and the Nets’ odds of trading for the four-time NBA champion have increased 10%. Per the BetOnline sportsbook, the Nets have the best odds (-175) of trading for James. Of course, the Cavaliers have the next-best odds (+200) of reacquiring their beloved player.

And the Heat possess the third-best odds (+300), followed by the Jazz (+500) and Knicks (+750). Continue reading to compare the odds for each team on our “LeBron James next team odds if traded” table below.

LeBron James Next Team Odds if Traded by Lakers

Will the Lakers trade LeBron James this offseason? Probably not. However, there is a slim chance that the four-time MVP will retire while playing for some other team. In a total of 56 games played, the 18-time All-Star averaged 30.3 points, 8.2 rebounds and 6.2 assists per game last season.

Additionally, the Nets’ odds have increased by 10% to trade for King James. Find out why down below. Of the five teams listed in our table here, if LeBron were to ever request a trade from the Lakers, the Heat are the most intriguing option. He already won two rings down in South Beach in 2012 and 2013. If James wants to win another championship, why not go back?

Would the Nets trade Kevin Durant to the Lakers for LeBron James?

One interesting NBA trade rumor circulating on social media right now concerns the possibility of Nets G.M. Sean Marks trading Kevin Durant to the Lakers for LeBron James. For starters, this deal would never happen because it would break the Internet. It’s just not realistic.

Not to mention, how would such a move benefit either team? If the Nets struggled to win in the playoffs with Durant, how would they improve with James? They were swept in the first round by the Celtics. In the 2021-22 season, the Lakers finished 33-49 (.402), ranking 11th overall in the Western Conference.

LeBron turns 38 in December this year. While he finished second in scoring behind 76ers center Joel Embiid last season, the forward might not yet be ready for a change in scenery. His family lives in Los Angeles. On top of relocating his family, James would play alongside Kyrie Irving again.

Furthermore, according to multiple sources, Durant’s preferred teams are the Heat and Suns. It is highly doubtful that Durant would want to reunite with Russell Westbrook in Los Angeles. Plus, the Nets front office are not interested in trading for Westbrook, and the triple-double king picked up his $47,063,478 player option with the Lakers for the 2022-23 season.

Could James and Durant form a Superteam on the Heat?

Moreover, LeBron James won back-to-back titles in Miami under coach Eric Spoelstra. His superteam consisted of Dwayne Wade, Chris Bosh and Ray Allen. As stated above, one of the two teams Durant is most interested in playing for is the Heat. In the event that James asks for a trade out of Los Angeles, one of his best opportunities to win another ring would be returning to South Beach.

Maybe a new big three would form on the Heat, such as James, Durant and Jimmy Butler. Heck, Bam Adebayo and Tyler Herro could get added into the mix as well. So, it would really become a big five. Yesterday, it was reported that P.J. Tucker agreed to sign a three-year, $30 million contract with the 76ers. As it stands out, the Heat have no interest in trading Kyle Lowry for Kyrie Irving.

Nonetheless, if LeBron wanted to return to the Heat, this move would give the Warriors a run for their money in the NBA Finals. Last season, the Heat lost in seven games against the Celtics in the Eastern Conference Finals. And the Heat lost in six games versus the Lakers in the 2020 NBA Finals.

If not trading for both players, Miami signing Durant or James would give the team the right push to make it back. James could take a pay cut to play in Brooklyn or Miami. He is set to earn $44,474,988 for the 2022-23 season. Maybe after next season NBA analysts will be asking these same questions again.

Other articles related to “LeBron James Next Team Odds If Traded” are on the main page.

BetOnline is one of the best sportsbooks in California, New York, Florida and Texas.