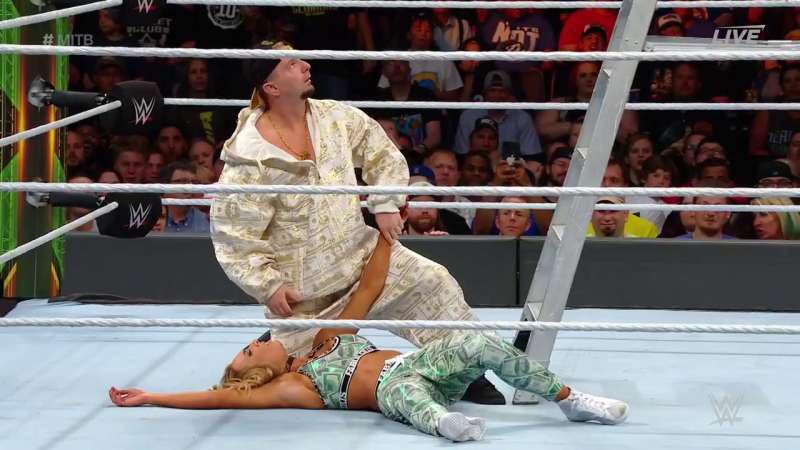 Since the summer of 2015, WWE has made it a point to put more focus on women in the business. They have done everything they can to show that women wrestlers are more than just “Divas”. Anything you can throw at them they can handle – Hell in a Cell, Iron Woman Match, Steel Cage. The next step was to occur last night with the first ever woman’s Money in the Bank Ladder Match.

It was to be just another example of how far the business has come. No more Bra and Panty matches, no more Lingerie Pillow Fights or anything of the sort. Women were nothing more than something to look at. Not anymore though! Thanks to the efforts of the likes of Charlotte Flair, Becky Lynch, Sasha Banks, and Alexa Bliss to name a few, the focus turned to the in-ring ability, as it should be. After years of being a reason to go to the concession stand, legitimacy had finally found its way to the woman’s division! OK, maybe it’s not completely gone, but it had never taken a bigger shot than it did in last night’s Money in the Bank match. Since its inception in 2005, The Money in the Bank Briefcase has been built to be one of the most exciting features of the WWE. With the successes of the Woman’s Revolution, the woman’s division was ready to have that entertainment weapon in their arsenal as well.

But within a matter of seconds, it was all taken away. Carmella won the inaugural match…sort of. The Princess of Staten Island won after James Ellsworth was the one that actually climbed the ladder and handed the briefcase to her.

For those of you who aren’t regular SmackDown Live viewers, you were probably able to figure out that James is a guy’s name. James Ellsworth is a man (well, kinda). In a match that was to show that the women can hold their own in a high-profile match, it ended up with a man doing the work and handing the win to the woman.

There really was no way that the match could have ended worse. It took so much away from five women that have worked hard to earn that stage. Those woman deserved to have a clean match with a solid finish and have that added degree of excitement in their division. But no, all that we are talking about is that a man did it for the woman. Just a bad idea. would set the standard. With how the match ended last night, that bar has been set pretty low. The match itself was entertaining to say the least. If everything in the match stayed the same but Carmella actually climbed the ladder, everything would be different.

But they decided to go with the ending they did. If they ended things that way next year or any future woman’s Money in the Bank match, that would be fine. Strange things happen in big matches all the time, it would have just been thrown in the pile. But, again, this was the FIRST.

I understand that both SmackDown Live Commissioner Shane McMahon and General Manager Daniel Bryan have said that they plan on doing something about it on Tuesday’s SmackDown Live, but it doesn’t matter, it happened. They even had a chance to make it right at that point…multiple ways. The refs were in a huddle after it happened, a simple ringing of the bell and a restart would fix everything and Ellsworth grabbing the case would have been nothing more than a quick comedy spot.

Or, what would have been better booking for the women involved, Ellsworth climbs the ladder and is close to grabbing the briefcase. Becky Lynch climbs up and knocks Ellsworth off of the ladder. As Lynch is looking down and gloating at taking care of Ellsworth, Carmella comes up from behind, pulls Lynch down and grabs the case. You get the same outcome and the girls look strong in doing so.

One of the worst parts about the decision is that Carmella deserves the spot! For those that have watched her since her debut in NXT a few years ago, you know how far her in-ring talent has come. She earned the right to be the first Ms. Money in the Bank on her own, not the way that it went down.

Whatever is done on Tuesday, it has to at least involve the relationship between Ellsworth and Carmella to be over. Every time that Carmella comes out with briefcase AND Ellsworth, people will only be thinking about Ellsworth and not where it should be, the briefcase.

There so many ways to end last night’s match that would have worked, and only one that would absolutely would not have. WWE took the wrong path.

SO WHAT DO YOU THINK? DO YOU AGREE WITH THE WAY THE WOMAN’S MONEY IN THE BANK MATCH WENT DOWN? HOW WOULD YOU HAVE ENDED THE MATCH? WHAT DID YOU THINK OF THE REST OF THE SHOW? LIKE OUR NEW PAGE ON FACEBOOK AND FOLLOW US ON TWITTER @FROM_THETOPTOPE AND LET US KNOW!

Topics
From the Top Rope MMA