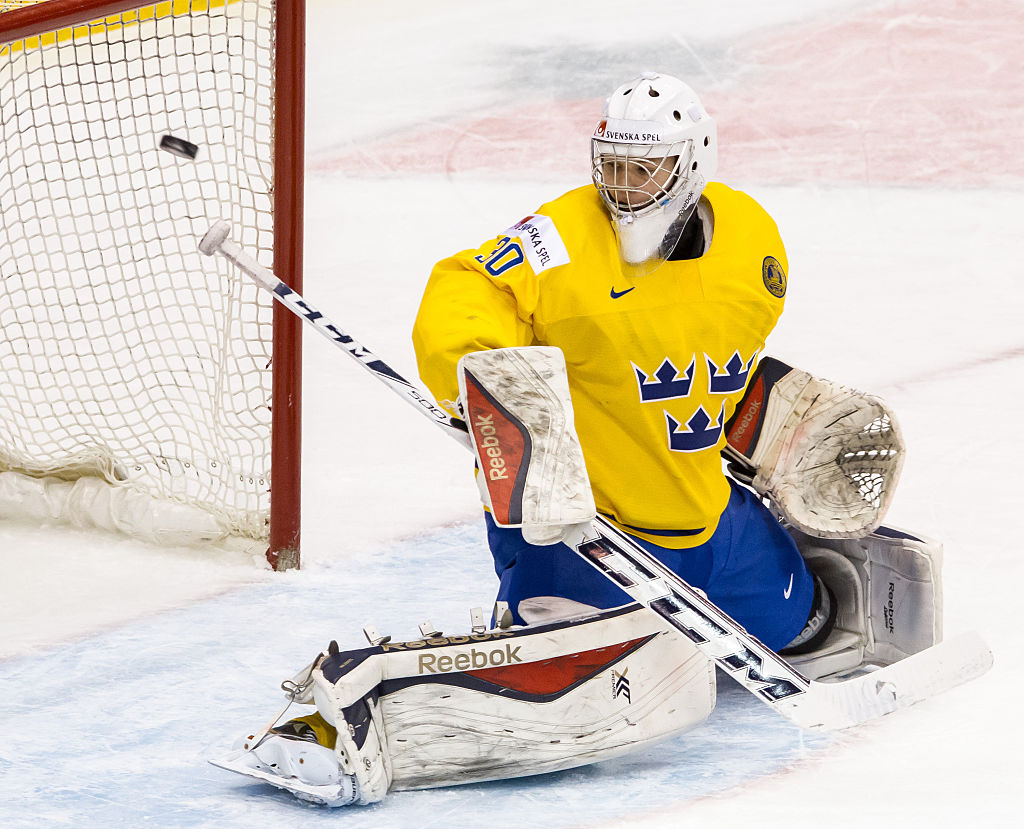 The Islanders have come to terms on a three-year entry-level deal with goalie Linus Soderstrom.

Soderstrom, a native of Sweden, was picked in the fourth round of the 2014 NHL Entry Draft, 95th overall. He is currently playing for HV71 of the Swedish Hockey League. He had the best Goals Against Average in the SHL with a 1.34 and a .943 save percentage in 22 games. In the playoffs last season for HK71, Soderstrom played in 16 games, had a 2.11 GAA, and a .922 save percentage.

HV71 won the Le Mat Trophy this season. The trophy is awarded to winners of the SHL.

Soderstrom, who will turn 21 in August, did attend rookie camp with the Islanders last season. Even though he’s a big presence at 6’4″, and nearly 200 lbs, it would be a huge shock to see him make the jump to the NHL right away, as goalies usually need time to develop. No offense to the Swedish Hockey League, but it’s not the NHL; nothing is. If he does in fact come over here next season, which in and of itself is not likely, there is a strong probability of him starting in the AHL. Henrik Lundqvist, who is probably the gold standard for Swedish goalies debuted at 23. So, while 21 is not out of the question, he probably needs a year or two to adjust to the North American style of play.

He will likely return to Sweden again next season, but just like last year he will probably be here for rookie camp. Arthur Staple believes he will probably he here for main camp as well. It will give him a good taste of the NHL. Perhaps he can return next summer with all intentions of at least starting in the AHL.

The young netminder is a very unique individual. He was diagnosed with ADHD, and Asperger’s Syndrome at the age of seven. Asperger’s is a mild form of Autism. Asperger syndrome also known as Asperger’s, is a developmental disorder marked by difficulties in social interaction and nonverbal communication, along with restricted and repetitive patterns of behavior and interests. As a milder autism spectrum disorder (ASD), it differs from other ASDs by relatively normal language and intelligence. Although not required for diagnosis, physical clumsiness and unusual use of language are common. Signs usually begin before two years old and typically last for a person’s entire life.

The Hockey News recently did a story on Soderstrom and how he excels despite the diagnosis:

“He’s tremendously focused,” said coach Rikard Gronborg. “He plays the angles real well. When we’re setting up a defensive plan, he’s a big part of that discussion so he knows where the shots are most likely to come from. That’s how we set up a defensive system; we play towards his strengths.”

Being 6-foot-4 certainly doesn’t hurt, either. But that super-human focus can be traced back to the Asperger diagnosis. The Swedish hockey program has known about it since Soderstrom began playing at the under-16 level, so they made it their business to be there for him. All the coaches have taken classes on how to work with such players and it basically boils down to setting up a structured environment and keeping communication very black-and-white, yes-and-no.

Whenever he does make his debut, it will add an interesting wrinkle to the Islanders’ goaltending situation. It may take a couple of years, but the Isles have not had a homegrown goalie since Rick DiPietro. The Islanders have had a Soderstrom, but never a Linus.