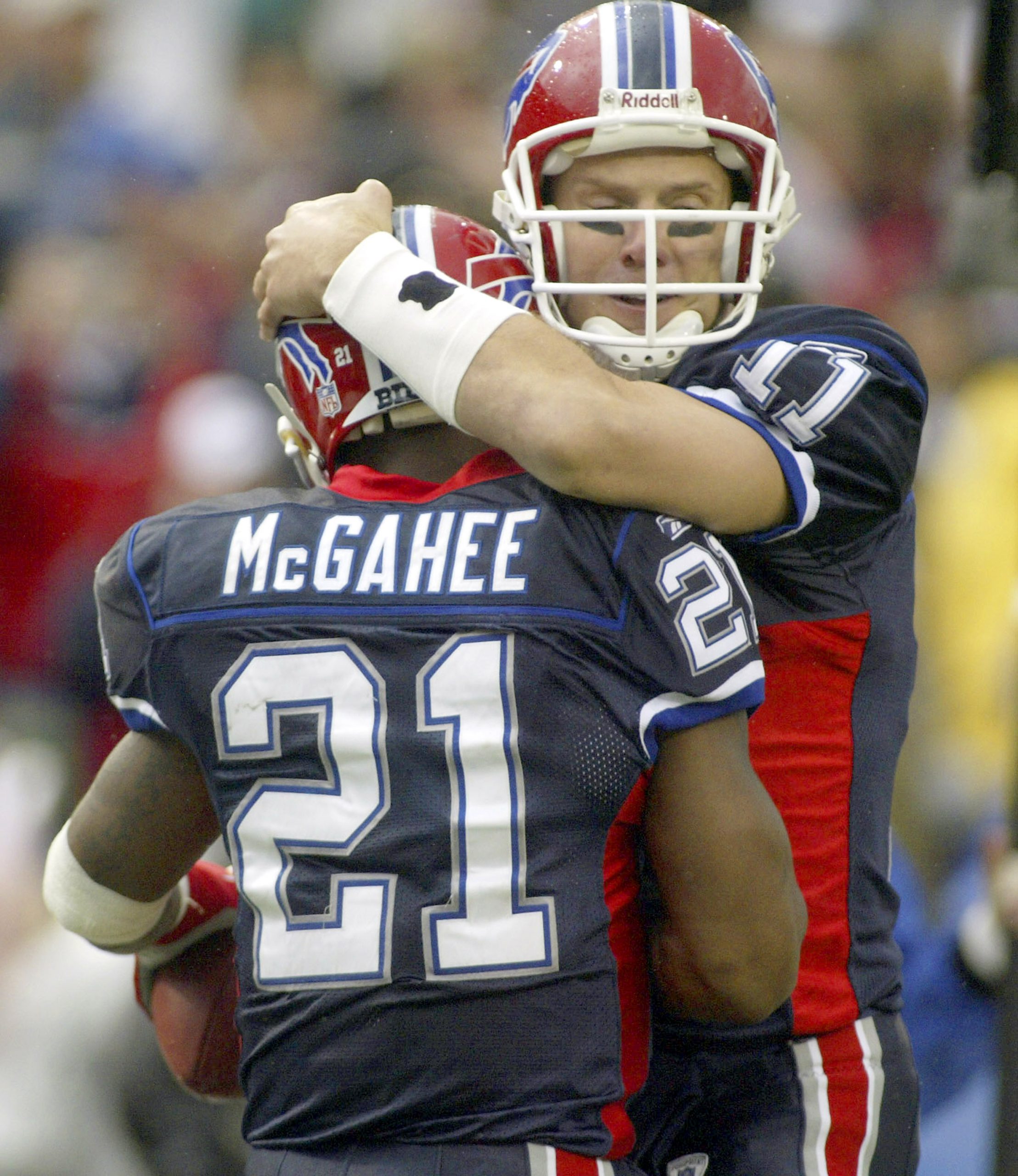 1) Drew Bledsoe, JP Losman, Trent Edwards, Ryan Fitzpatrick, EJ Manuel, and Tyrod Taylor- These have been the QBs the Bills have pointed to as being the guy who was going to lead them out of the drought. Sure, Kyle Orton and Kelly Holcomb had a bit of a run, but they were ‘break in case of an emergency’ QBs. The rest were being touted as being the ONE. Bearing a miracle for Tyrod Taylor, they are all going to fizzle out here. Aside from Drew Bledsoe, I wanted all these guys banished from the team at the end of their reign. Taylor, I’m not exactly there yet, but I would bet dollars to donuts I’m probably going to say by October they should move on. While I think all these QBs need to look in the mirror when it comes to blaming themselves on failing, the Bills also have the responsibility of realizing they didn’t do them many favors.

2) Bledsoe’s weapons are gone– No one had a better drought year than Drew Bledsoe in 2002. That offense was lights out and it was before the league really jettisoned into the passing league we see today. Bledsoe basically broke a bunch of team records and the offense had two 1,000 yard receivers and a 1000-yard RB. Sure, defenses caught up and realized if you got pressure on Bledsoe, his statuesque abilities would be exploited. Still, the Bills didn’t do him any favors when they traded one of his 1,000 yard wide receivers for a 1st rounder and replaced him with Bobby Shaw. They also didn’t help Bledsoe out when they needed a skill position player to play right away and decided to use that pick on Willis McGahee who didn’t play until Drew’s final season. They let Larry Centers and Jay Riemersma walk and replaced those 100 catches with Mark Campbell and Sam Gash.

3) JP Losman gets benched 10x- So when the Bills decided to cut Bledsoe, they handed the job to JP Losman. Fine. It made some sense since he was their former 1st round pick. But what didn’t make sense was that they benched him after just four NFL starts. Yes, he struggled, but who the hell benches their former 1st round pick after just 4 professional starts? Not only did they bench him, but the replaced him with Kelly F’N Holcomb. Way to insert confidence into your young QB. In 2005, Losman was benched two different times. In 2007, he lost his job to Trent after Vincent Wilfork took a cheap shot to his knee. Then when Trent Edwards got hurt, he got his job back, but then lost it again. So, yeah, 4 benchings in three seasons. Not exactly continuity there.

4) Offensive line train wreck- Trent Edwards may have had the most promise of any of the drought QBs to start their careers here. If you had viewed it through the prism of him being a young QB, he started his career off very well. Unfortunately, in 2008, his 5-1 start become a bit of an aberration as the team collapsed down the stretch. So, in 2009, the Bills did everything they could do to give Trent another weapon to succeed and that was T.O. Great! Owens, Lee Evans and Josh Reed to go along with Lynch/Jackson at RB is a nice batch of skilled guys. And with Jason Peters protecting his backside…Oh, right, let’s trade our franchise LT tackle -who was obviously underpaid- for a 1st round pick. And in return, we decide to start 3 offensive lineman who never started an NFL game (Andy Levitre, Eric Wood, and Demtress Bell). Even though Wood/Levitre turned out to be decent players, to have that many OL rookie OL start in a pivotal year for Jauron/Trent, was a bad decision. Let me tell you, the OL from 2009 was complete trash. Marshawn Lynch was being tackled 3 yards behind the line of scrimmage and the team gave up 46 sacks. Again, two steps forward with helping the QB out and then 3 steps back because we were cheap fucks.

5) Donald Jones is your #2 WR- In 2012, the Bills were the only NFL team to NOT have a WR/TE drafted within the first two rounds on their roster. Their highest TE/WR drafted on the roster was TJ Graham who was picked in the 3rd round. Chan Gailey once said he’d rather win the SB without Babe Ruth. He wasn’t kidding when you look at the misfit tandem at WR that Ryan Fitzpatrick had. You wanna know why Fitz threw for 30TDs in 2015 with the Jets? It was because Brandon Marshall and Eric Decker were better than the trio of Stevie/Donald Jones/David Nelson. Would it have killed the Bills to draft a WR within the first two rounds from 2010-2012 to help Fitz out? Noooo. Let’s draft a F’N running back again and trade Lee Evans because fuck the passing game.

6) EJ Manuel gets Losman treatment- Let’s start with 2014 draft. I had the Sammy Watkins-Mike Williams-Stevie Johnson-Robert Woods foursome dancing in my head. I remember writing a piece right after the draft about what a difference two seasons make at WR. And what happens? The Bills trade Stevie for a future pick. Sure, Stevie didn’t do dick in SF/SD, but his replacement, Mike Williams, lasted for about a cup of coffee and was a drop off from Stevie. Now fast forward to week 5 of 2014 season and the Bills decide to bench their former 1st round pick at QB after just 14 NFL starts. And who do they replace him with? Kyle F’N Orton. Sure, we look back at EJ and laugh at the notion of him starting, but football 101 tells me you shouldn’t give up on a 1st round pick at QB after just 14 starts. Also, Orton sucked down the stretch and Doug Marrone hated EJ.

7) Watkins-Boldin-Jones- For about 48 hours, next to the DL, I thought the Bills WR core may have been the strongest unit on this team. The Bills were going to put Tyrod Taylor in position to succeed with the amount of weapons he had. No more excuses. Within a week, it went straight to shit. Watkins, who made Tyrod a much better player when they were together, gets dealt. Boldin retires. Your #1 and #2 WRs gone. Now, the Bills have a #1 WR who hasn’t practiced yet, a rookie #2 WR, and a bunch of dudes. Oh, and your right side of the OL is trash. Plus, your coordinator wants you to be a rhythm passer under center which is something he’s never done before. Good luck, Tyrod!

8) Final word- Look, I’m not trying to say if the Bills kept Jason Peters or drafted Dallas Clark instead of Willis McGahee, these QBs would have succeeded. They probably wouldn’t as it is probably more on the QB than the parts around him. However, I believe in nuances in football discussions and this still being a team game. The parts around these QBs shouldn’t be glossed over in favor of putting ALL the blame on the QB. The Bills haven’t done their QBs many favors during the drought. The Mike Gandys, Derek Schoumans, and David Nelson’s of the world shouldn’t have been starters in the NFL.

If I’m Tyrod Taylor, I’m pissed off because Watkins got dealt. If I were Trent Edwards, I’d be pissed off if I had basically a rookie offensive line in front of me. If I were Fitzpatrick, I’d be pissed that Donald Jones was my #2 WR. Don’t even get me started on Kevin Gilbride or Turk Schonert. How about when Chan called way too many pass plays instead of running CJ Spiller? Nate Hackett/Doug Marrone’s love affair with punting? The list of shit decisions not having to due with the QB are longer than the list of shit QBs.

I mention all of this as not an excuse to why those guys failed, but as a lesson for what the Bills better learn when they draft a QB next year. Let’s try and get some weapons around whoever that QB is. Let’s build a team and not make it into an Andrew Luck or Phillip Rivers situation. Yes, great QBs do tend to make WR/OL better, but I wouldn’t mind for a change to have those positions stand on their own without the QB accentuating them.