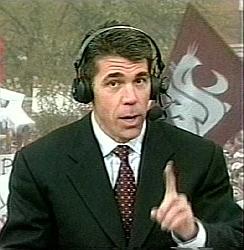 Our good friend and source sat down with a certain AD the other day and gave me some good nuggets of info. A quick recap:

1) The stadium renovation is a bit behind what fans want. Right now it’s set to begin in Nov/Dec of ’07, not ’06. It would be ready by kickoff for the ’08 season. That’s provided we have $25-$30 million in donations by then, certainly not a slam-dunk but so far things are very positive. As touched on before, the idea is for a second deck on both the student and reserved sides of the field, leaving the endzones virtually untouched except for basic upgrades.

3) There is a serious bid from CBS right now to move the WSU-Auburn game off ESPN and on to CBS for a prime-time matchup next year. So serious in that CBS is ready to DOUBLE ESPN’s offer for the game! Turns out ESPN would pay the Cougs $250,000, and Auburn is already on the line for a newly-negotiated sum of $850K! CBS is saying they will pay $500 to even $550K to broadcast it next year! So no matter what, we’ll get between about $1.1 to $1.4 MILLION just to play Auburn next year. It makes a lot of sense, even if it means a loss.

4) Oregon State game is going to be on TV. Not officially scheduled yet but it will be announced shortly.

5) Believe it or not, there are talks ongoing right now about a WSU Cougar sports CHANNEL! All Coug sports would be on the channel. I didn’t get too many details, but the feel is it will happen.

6) 35K tickets as of Monday are sold for the Seattle game, and the estimates for walk-up are about 10K. Grambling’s band has perfomances Thursday and Friday of this week to hype the game and their appearance at both halftime and after the game, so you never know on the walk-up.

Other stuff – Agree that Doba is talking up Grambling, but that’s for their own benefit. The stories yesterday per Cougfan had many players saying there is no way they will overlook this one. Plus a lot of the players have said they have known about Grambling and their history. Since the game is in Seattle and there will be 40 – 45K people there, they probably won’t have too much trouble getting up for this one.

Aaron Johnson is battling a bruised knee. Not good news really when you consider Ropati is out until mid-October. Then again, play about a half this week, and then sit down for the next two weeks thinking about Oregon State and he’ll be ready to go.

Michael and I both went 5-2. Lawson’s picks (winners in Crimson):

This week, we’ll go Pac-10 plus the “national” game of the week. Picks are due Friday night. Rooster, jump right in! You don’t even have to explain anything, just pick away. Here’s the games, and my picks: