Look: Kobe Bryant hits up World Series game, hangs out with Clayton Kershaw and others 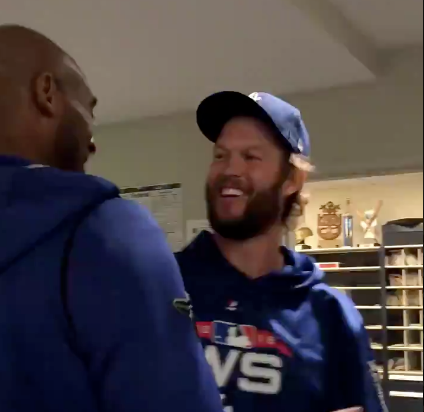 One of the greatest athletes to ever suit up and play for a Los Angeles professional sports team hit up Game 4 of the World Series at Dodger Stadium.

The Dodgers were hoping to tie the series against the Red Sox up at two games apiece, after pulling off a thrilling 3-2 win on Friday night, via an 18th-inning home run from Max Muncy.

Lakers legend Kobe Bryant hit up the game, and he was seen in the clubhouse hanging with a number of Dodgers players beforehand. Here he is talking to and dapping up Clayton Kershaw.

.@kobebryant in the building! #WorldSeries pic.twitter.com/6W1HlzLD9A

He also announced the Dodgers players’ names during pregame introductions.