Mad over Bum-mer of Met game 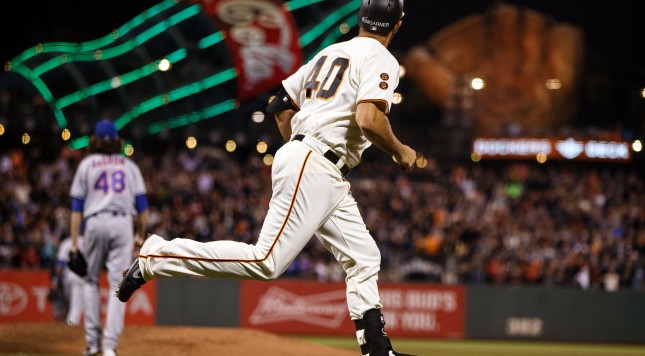 Ruggiano was a Met for all of three games before landing on the DL. When I heard that Ruggiano was back, I have to admit that I had almost forgotten he was on the team. And then he came up in the fourth inning against Giants ace Bumgarner and hit a grand slam. The Mets led, 4-0, against one of the teams ahead of them in the wild card race, and Jacob deGrom was on the mound. The playoff push was underway!

One of the side effects of doing this blog with Squawker Lisa is that I sometimes find myself thinking about how John Sterling would call Met homers. (Not that I want Sterling anywhere near Met broadcasts.) Justin time! Justin is bustin’! Moulin Ruge! This homer deserved a special call. And it even had some good trivia behind it. Ruggiano, who was playing in only his fifth game in 2016, last homered in September of 2015 against none other than Bumgarner. Sandy Alderson is a genius for signing Ruggiano! Terry Collins is a genius for putting him in the lineup batting sixth! The Mets are on their way!

No Met fan could be faulted for thinking it was going to be a good night. Over his previous four starts, deGrom had allowed a total of two runs. He had allowed more than three runs in a game just twice all season before last night.

And then deGrom gave up four straight hits to start the bottom of the fourth. Now it was 4-3, with the tying run on third and none out. But deGrom struck out Joe Panik, and now the pitcher was up. It looked like deGrom could get out of the inning with the lead, or at least a tie game.

Unfortunately, while Bumgarner was not having a good game on the mound, he was just fine at the plate. He hit the ball over the fence to give the Giants the lead, 5-4. I don’t blame deGrom for looking away in the above photo as Bumgarner circled the bases. I wanted to look away as well. The game seemed over that point, and though the Mets would score more runs, the Giants never relinquished the lead, winning, 10-7.

Granted, it wasn’t just any pitcher at the plate, it was Bumgarner, who hits so well for a pitcher that he wants a Home Run Derby for the pitchers. Still, he is a pitcher, and even after last night, Bumgarner is hitting .179 with 3 HR, 3 doubles, 12 hits and 7 RBI in 67 at bats. Not exactly the stats of a number three hitter.

Tonight is only the second game Bruce will have with Yoenis Cespedes hitting behind him, so maybe Bruce’s hitting will improve. Asdrubal Cabrera is back as well. Neil Walker is also available to play, though not yet back in the starting lineup. So things should be looking up, right?

Not so fast. Steven Matz was scratched from tonight’s start, so now the pitcher is Seth Lugo. After the recent outings of Logan Verrett and Jon Niese, you’ll excuse me if I’m skeptical about Met spot starters.

In Matz’s last start, he took a no-hitter into the eighth. His pitch count was over 100, and there was concern over how long he should stay in the game, particularly with his bone spur. Then he gave up a hit and was taken out after 105 pitches.

And Matz still got hurt, and with a new injury issue, shoulder discomfort.

The Mets are now 60-61. They are 4 1/2 games out of the second wild card spot, with two other teams, the Marlins and Pirates, between them and the wild card sports currently held by the Giants and Cardinals.

The Mets are closer in the standings to the Phillies, who are tanking the season, than the wild card.

The Yankees, who sold off their top players at the deadline, have a better record than the Mets.

The Mets will probably have to win about 2/3 of their remaining games to have a shot at the postseason. And it’s hard to see that happening.

View All Posts By Jon Lewin

View All Posts By Jon Lewin