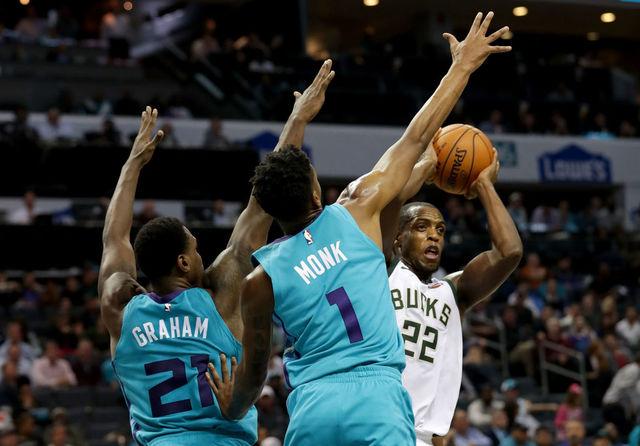 For anyone who was starting to question why we drafted Malik Monk this past summer, last night’s game should be a strong reminder as to why.  Monk exploded in the 4th quarter, draining shot after shot.  Dell Curry put it best when he said that Monk isn’t a shooter, he’s a scorer.  Monk was draining them from the 3-point line (5-8) as well as hitting mid-range shots, floaters, and converting on drives to the basket.  In his best performance to date, Monk finished the night with 25 points, 2 rebounds, 21 assist, and 1 steal.  He was only eclipsed by Kemba Walker in points last night by 1 point (26 points, 2 rebounds, 3 assists, and 1 block).

These are the games that give Hornets fans something to smile about.  We were playing a solid, young team, which also has the leading scorer in the NBA on it.  Giannis Antetokounmpo was held to 14 points, 13 rebounds, 5 assists, 2 steals and 2 blocks.  Only the performance of Khris Middleton kept the game close (43 points, 5 rebounds, and 7 assists).  The Hornets did not play great defense last night, allowing the Bucks to shoot 19-36 from the 3-point line.  We were just lucky that they didn’t play good defense either and we were 14-25 from the 3-point line ourselves.

Dwight Howard gave another double-double performance last night, scoring 17 points, grabbing 11 rebounds, while dishing out 3 assists and getting a steal.  Is Superman back?  I want to say yes he is, and he’s having fun doing it.  I should mention that Dwayne Bacon had 10 points, 4 rebounds, 1 assist, 1 steal, and 1 blocked shot.  I wanted to mention it because Dwight Howard was so proud of our rookies that he took them out to dinner because he is proud of the way those 2 played last night and have been playing this season.  I think that is the coolest thing ever because when a future hall-of-fame teammate wants to take you to dinner because he’s proud of you; those gestures make an impression on these young guys that far exceeds anything that could just be said.  I think Dwight has found a long-term home in Charlotte, and these rookies are only going to get better the longer they have guys like Dwight around.

I have to give special recognition to Jeremy Lamb, who is far exceeding everyone’s expectations.  He had his 8th straight 15+ point performance last night, scoring 16 points, including 4 big free throws to seal the deal last night.  He also had 4 rebounds and 2 assists for the game.  Rounding out our starters was Marvin Williams, who quietly cruised to a 15 point, 4 rebound, and 1 steal night.  When you have 4 starters in double figures scoring, it’s hard to beat them.  Then when you factor in a bench that contributes 52 points on the night (Frank with 11 points, 3 rebounds, and 4 assists and Cody with 6 points, 8 rebounds, 1 assist, and 1 block), that is a team firing on all cylinders and is almost impossible to stop.

The one down side to the night was that MKG came out of the game feeling ill.  Fortunately, he was just sick and there were no injuries.  His defense could have kept this game from being close, but his health is most important.  Hopefully he will be back for this 4-game road trip.

The only other notes I wanted to mention is that Nic Batum is possibly 2-3 weeks away from being back on the court.  Michael Carter-Williams has been testing his knees by playing in a scrimmage with the Greensboro Swarm.  My understanding is that it was to gauge where he is and hopefully, from what they saw, he will be available soon.  It probably won’t be on this 4-game road trip, but it will be soon.  In the meantime, as long as Monk, Bacon, and Graham keep playing some solid basketball, the Hornets should be in a really, really good place once all of our guys are healthy again.  Guys who typically wouldn’t be getting much playing time have been getting very valuable minutes, which makes our depth crazy good as we get deeper and deeper into the season.

You guys know what we just got to keep doing…right?