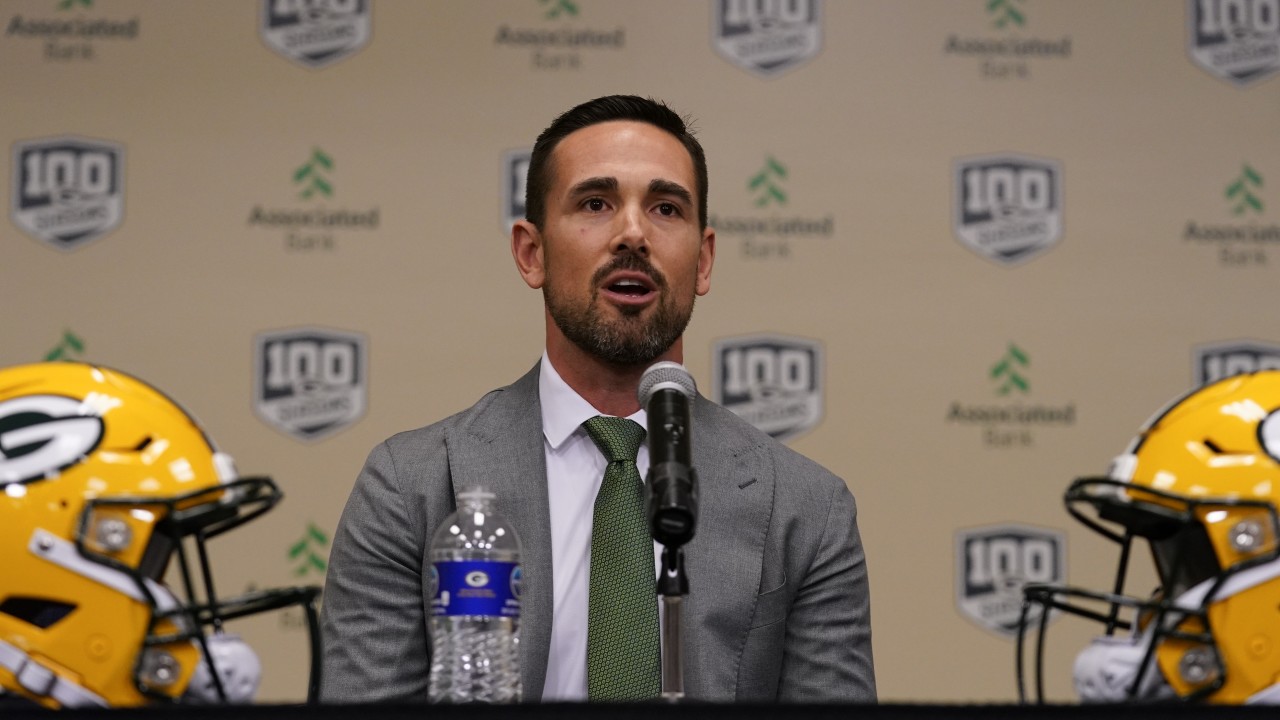 The Green Bay Packers introduced Matt LaFleur as the team’s 15th head coach on Wednesday. For the first time in 13 years, the Packers have a new man on the sidelines. The 39-year-old LaFleur made an immediate impression with his passion for the game, the job and the Packers organization.

“My vision here in Green Bay: I want to develop a championship culture that is filled with high character people that are dedicated to becoming the best versions of themselves,” LaFleur said. “We are going to be process driven in the pursuit of bringing a Lombardi Trophy back to Green Bay.”

When he got the job, LaFleur was so moved he was “speechless.” He also appreciated the tradition of the Packers organization and what the fans are like in Green Bay.

“To be following in the footsteps of Curly Lambeau, Vince Lombardi, Mike Holmgren, Mike McCarthy, it’s truly an honor,” LaFleur said. “There is no place in all of sports that is like game day at Lambeau Field. The love and support the fans have here is incredible…There’s just so much tradition here and I can’t think of a greater place to be a head coach in this league and really in all of sports this is a dream come true for me.”

Team president Mark Murphy was certain that the team had found the right man for the job. “He has the unique combination of a quiet confidence but yet a humility,” Murphy said. “I see him having the ability and experience to really make a difference. I think we’ve found a gem in Matt and we’re really excited about the future under his leadership.”

LaFleur indicated his first order of business is to hire a coaching staff, a task he will start working on immediately. While rumors circulated that the new coach intends to keep defensive coordinator Mike Pettine, LaFleur said he hasn’t spoken with Pettine yet although he intends to do so very soon. Expect announcements on which assistant coaches may be staying and who will be let go in the very near future.

The new head coach also knows he needs to develop a good relationship with quarterback Aaron Rodgers. “I cannot wait to work with him,” LaFleur said of A-Rod. “I think he’s equally excited. There’s a lot of work to be done in front of us, but I’m just looking forward to that opportunity. I think we’re both on the same page. We are committed to winning, there’s no doubt about it and he’s a competitor.”

LaFleur has a background coaching offense, but he mentioned what he was looking for on defense and special teams as well. “I want a defense that is ball hawking, that is going to create turnovers, that plays fast and physical and eliminates explosive plays,” LaFleur explained. “On special teams it’s very similar. I want to be sound. I want to attack matchups on special teams. We always talk about penalty free aggression. We want to be aggressive, but we want to be smart. We don’t want to put ourselves in negative situations.”

Some critics questioned whether LaFleur has enough experience to become a head coach. He only called plays in the NFL for one year, this season with the Titans. But despite the team’s low passing output, the adjustments he made when injuries struck his team impressed Murphy and general manager Brian Gutekunst.

For LaFleur, the one season in Tennessee was important for his development as a coach. “I needed to challenge myself. It would have been easy to stay in LA. You look at the roster and the success they are having this year. I took the risk because I needed to get outside my comfort zone as a coach,” LaFleur said. “The things I learned this year that football is not always easy. You better navigate through some adversity. I was proud of that…I know I would not be he coach I am today without having the experiences I had last season and all the adversity we went through.”

LaFleur thanked his many coaching mentors like Mike and Kyle Shanahan, Dan Quinn and Sean McVay, but he also indicated he would do things his way. “I want to be my own person. The way I lead is going to be different than Kyle and different than Sean,” LaFleur said. “The only way to lead is you better be true to yourself. These players are extremely smart. You better be real you better be honest and that’s exactly how I’m going to be with these guys.”

The key for the new coach is gradual but continuous improvement. “The process is to improve on a daily basis,” he explained. “In this league or in life you never stay the same. You’re either going to get better or you’re going to get worse. Our mentality is going to be get a little bit better every day and I think the results will take care of themselves. If we continue to move forward on a day by day basis, I think we’re going to win a lot of games here.”

In the end, Gutekunst was confident he and Murphy had found the right man for the job. “He made me feel like he could coach our whole team, that he could drive our team to where it needed to be,” the GM declared. “we need to get better and we need to play harder and we think he can do that for us.”

The test for Matt LaFleur and the Green Bay Packers begins now.