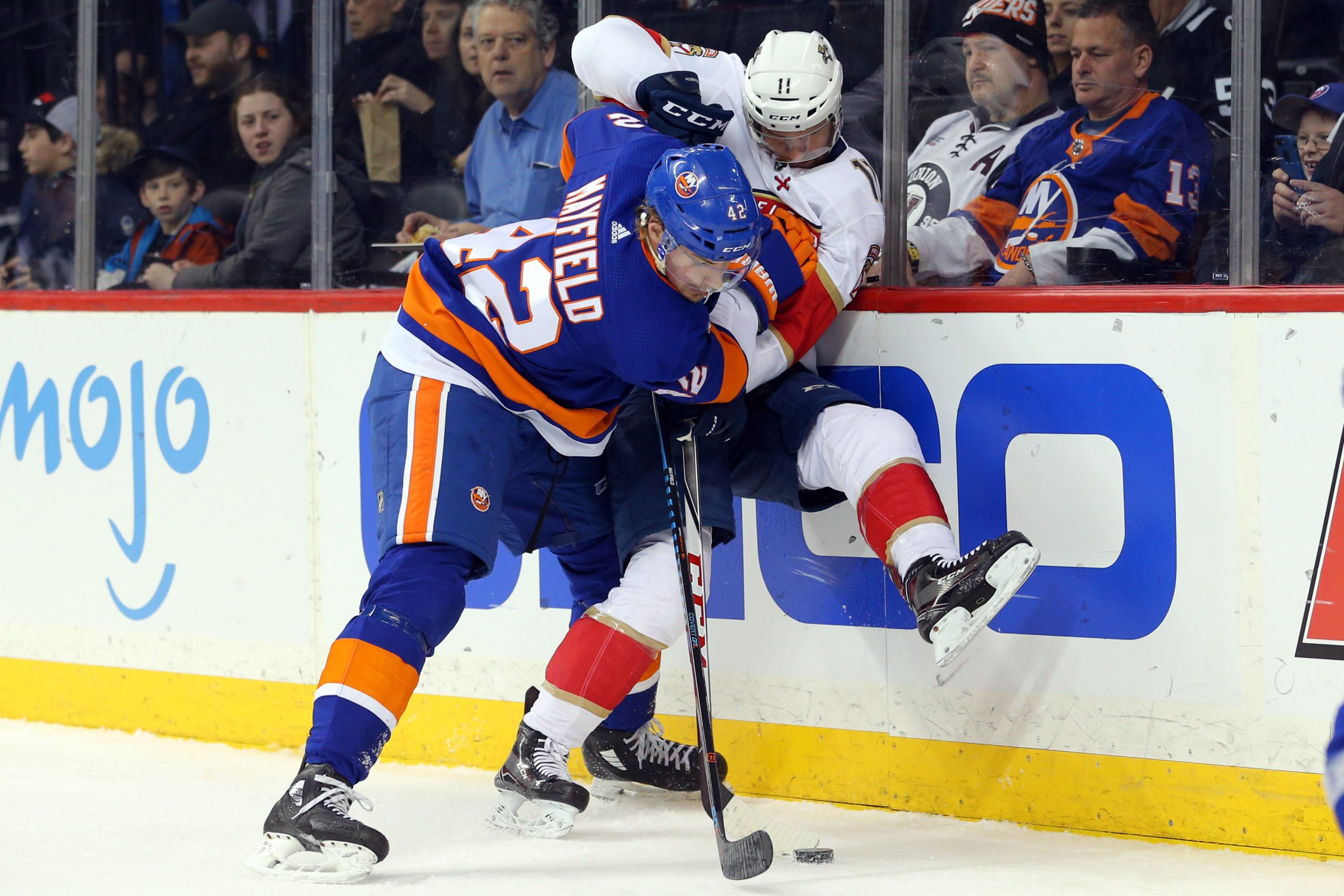 EAST MEADOW, N.Y. — Stop me if this story sounds familiar.

An Islanders defenseman leaves a game early and doesn’t return, and later it is learned that said defenseman will miss an extended period of time. Well, that is the case with Scott Mayfield.

Mayfield left Monday’s loss to Nashville after blocking a shot from P.K. Subban and is expected to miss at least four weeks. The defenseman was put on injured reserve retroactive to February 5 on Wednesday.

“He’ll be a while. Lower body and significant,” Islanders head coach Doug Weight said after practice on Long Island.

Mayfield is the third Islanders defenseman who has been sidelined for an extended period of time. The Islanders have already been without Johnny Boychuk since December 28 and Calvin de Haan is out for the remainder of the year.

The string of injuries on the blueline has forced the already young Islanders defensive to lean on several of those younger players even more. Sabastian Aho, Ryan Pulock and Adam Pelech have seen increasing amounts of ice time due to the injuries.

“It’s that time of year. Nothing you can do about it,” Weight said. “It’s disappointing, but let’s go. We have a lot of good players and go to work… We have bodies and that stuff will work itself out. You definitely have to put some added angst in some guys and challenge them, but you have to go play.”

The loss of yet another defenseman likely won’t help the team’s already struggling defense and the high volume of shots they’ve given up. The Islanders have been outshot 186-127 in their last four games and have given up 40 or more shots in each of those games.

The issue has been a persistent problem for the Islanders, but it has garnered increasing attention recently with points becoming even more important. Islanders captain John Tavares is hoping that the team can spend less time in its own zone to alleviate some of the pressure off the defense.

“The best we can we’re trying to spend less time in our zone,” Tavares said. “I think if we don’t have to play in our end and use our strength,  which is our ability to skate and be strong on the puck and create opportunities offensively, it’s to play with the same kind of energy. The same kind of pace in the offensive zone… Everyone just has to go out there and do their job. I don’t think anyone needs to go out there and try to do everything out there.

“I think we need to trust one another. Give a lot of each other support, especially guys whether it’s their rookie year or they just got called up.”

The Islanders showed that they can successfully execute that plan on Monday in the third period. The Islanders played a strong third against the Nashville Predators and held one of the best teams in the Western Conference to just two shots for nearly 15 minutes of the final period.

“I think that third period was a pretty straightforward, get it behind them, make them come 200 feet type of mentality,” Cal Clutterbuck said. “I think if we can build more of that into our first two periods it will only benefit us… Just making sure wingers are getting out into the lanes and making sure we’re managing the puck properly.”

This and That… Mathew Barzal did not participate in the Islanders practice on Long Island on Wednesday. Weight characterized his absence as a maintenance day and should be ready for Thursday’s game in Buffalo… Casey Cizikas practiced on the second line in Barzal’s absence… The Islanders weren’t the only ones dealing with injuries on the blueline. Their AHL affiliate, the Bridgeport Sound Tigers, lost Mitch Vande Sompel late in the game during a 5-4 overtime loss to the Hartford Wolf Pack.