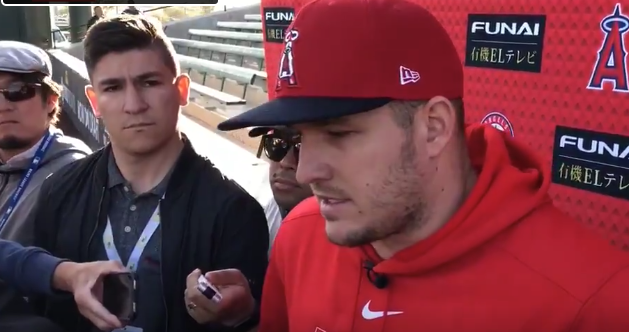 Angels superstar slugger Mike Trout is currently the face of baseball, so it was only a matter of time until he was asked about the Astros’ sign-stealing scandal.

Trout is a soft-spoken guy who is often a man of few words, and he also knows his play, not crossing the line or being abrasive, even if he feels passionate about a subject.

But the Astros’ sign-stealing scandal clearly has him, as well as other players, on edge, and he put both the team’s players and the league on blast, in speaking to reporters at spring training on Monday.

“It’s sad for baseball,” Trout said, via ESPN. “It’s tough. They cheated. I don’t agree with the punishments, the players not getting anything. It was a player-driven thing. It sucks, too, because guys’ careers have been affected, a lot of people lost jobs. It was tough. Me going up to the plate knowing what was coming — it would be pretty fun up there.”

“I lost some respect for some guys,” Trout said, of the Astros players.

"It’s tough. They cheated. I don’t agree with the punishments, the players not getting anything. It was a player-driven thing."

He later added that knowing which pitches were coming “would be fun,” and it probably would be, for fans, as we could envision him crushing home runs at nearly every plate appearance.