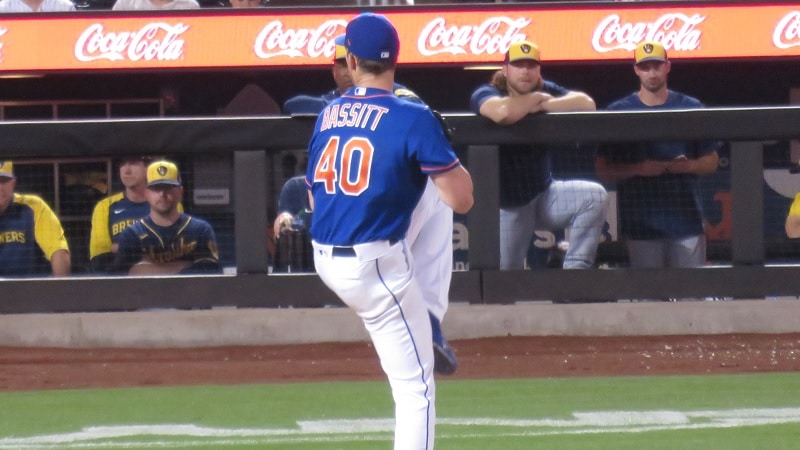 Now that the 2022 season is over for the New York Mets, we have been looking back at the year that was. After taking a more general view of the offense, pitching, and coaching staff, it’s time to take a deeper dive into the Mets’ players. This series will take a look at every player on the roster for the Mets at the end of the season from A (Pete Alonso) to W (Trevor Williams). The review will look at their season statistics, stories, and what role (if any) they will have next season. We continue the series today with a look at starting pitcher Chris Bassitt.

Story: Needing another starting pitcher after the conclusion of the lockout, the Mets acquired Chris Bassitt from the Oakland A’s on March 12 in exchange for pitching prospects J.T. Ginn and Adam Oller. An injury to Jacob deGrom bumped Bassitt up to the No. 2 slot in the Mets’ rotation and he was the team’s most consistent starter over the course of the regular season. Bassitt set a career high with 181.2 innings pitched, making 30 starts for the first time in his career and missing just one turn in the rotation after contracting COVID-19 in June. The Mets saw Bassitt win some big games as well, including key victories against the Atlanta Braves in July, Philadelphia Phillies (twice) in August, and Los Angeles Dodgers in September.

Things turned for Bassitt towards the end of the regular season, when his final start came in the third game of a series against Atlanta where the Mets needed just one victory to essentially wrap up the National League East title. Bassitt needed to come up with a big performance after the Mets dropped the first two games of the series and couldn’t deliver, giving up four runs in 2.2 innings to suffer a demoralizing loss that cost the Mets the division. The Mets turned to Bassitt again in the Wild Card Series, where they were tied with the San Diego Padres at 1-1, to start the decisive Game 3. Bassitt was thrown off his rhythm early as the Padres repeatedly stepped out of the batters box and struggled again, giving up three runs in four innings to take a loss in the game that ended the Mets’ season. Fans also weren’t thrilled with some of Bassitt’s comments prior to that outing when he told the media that the pressure from the fan base was extremely high over things like a two or three-game losing streak during the regular season.

The flop in Bassitt’s final two starts is the last thing fans will remember but he was still an extremely important pitcher on the team. The Mets don’t win 101 games without getting an excellent performance from Bassitt, who stepped up in a big way when deGrom and Max Scherzer spent significant time on the injured list.

The Mets and Bassitt agreed on a mutual option as part of his final salary arbitration settlement but Bassitt will likely decline his end of the option to test the free agent market. This will likely lead to a qualifying offer from the Mets, who would thus be entitled to receive draft pick compensation if Bassitt leaves for another team. Bassitt did indicate during the season that he is open to staying in New York but this could come down to how much money he gets offered by the Mets and other teams. The Mets may not want to guarantee three pitchers 33 years and older big money if they are able to retain deGrom alongside Scherzer, so Bassitt could end up leaving for another team in that scenario.

The path back to the Mets for Bassitt could well be determined by deGrom, who has given mixed signals about his intentions apart from committing to opt out of his contract. deGrom’s departure would make Bassitt an imperative re-sign for the Mets since they need top-line starters and Bassitt did demonstrate an ability to handle performing in New York (at least during the regular season).

Check back next week as our Player Review Series continues with a look at third baseman Brett Baty!