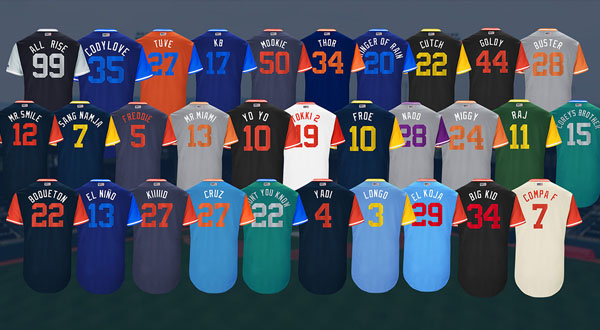 Last week, Major League Baseball released the official jerseys, with nicknames, that each team and player will wear during the Players Appreciation Weekend later this month. Some players elected to use their last name and in some cases their first name, rather than a unique handle. For the most part, during the weekend of August 22-24, the majority of the players took part in this fun and creative activity that the MLB and players union added this season. After the weekend’s festivities, the game worn jerseys will be auctioned off, with proceeds going to the MLB-MLBPA Youth Development Foundation. Without further ado, here are the best names from the West Coast.

This fan base can understand, with all of the moves they typically make every year, PTBNL is the acronym for “player to be named later” in trade lingo. On a good day, Chris Smith can get his velocity in the mid 80’s on command so Rock n Fire will get its laughs around the clubhouse. Lastly, and quite possibly the best nickname of the weekend, Blake Treinen went with B-Lockay, a reference from the show Key and Peele.

The 1990’s generation will love the Saved by the Bell reference with AC, from Austin Slater. This list would not be complete if Mad-Bum wasn’t on it. Along with Bumgarner, Jeff Samardzija has had his nickname Shark for quite some time now, dating back to his Chicago Cubs days. The coolest first and last name combination goes to Denard Span with Spaniard.

Luis Torrens brought a fair food favorite to life with his name, Churro. Brotato will be frat brothers favorite brought to you by 2017 All Star Brad Hand.

Not many stranger nicknames on "Players Weekend" jerseys than "Brotato" … @sdutsanders asked Brad Hand about it: https://t.co/T75YwJ0O1u

You have to really appreciate Kyle Seager embracing his brother’s success with his nickname, Corey’s Brother. You can never go wrong with a little Hubba Hubba. Nelson Cruz is known for the long ball, so Boomstick is very fitting.

Shut it down, no one is beating Kyle Seager's Players Weekend jersey pic.twitter.com/5HbSEAHlFy

Winner of “Nickname that best represents the personality of the player” award goes to Yasiel Puig with Wild Horse. Homage to the great children’s character Yogi Bear, Logan Forsythe went with his version with Logie Bear. The old man in the group, Chase Utley decided to embrace his look and went with Silver Fox.

The playful back and forth battle between Mike Trout and Garret Richards created a funny combination. Trout went with his long time nickname of Kiiiid, but with five “i”, so Richards went with Garrrrrett that included five “r”.

What’s your favorite nickname from your team? Let me know in the comments below.