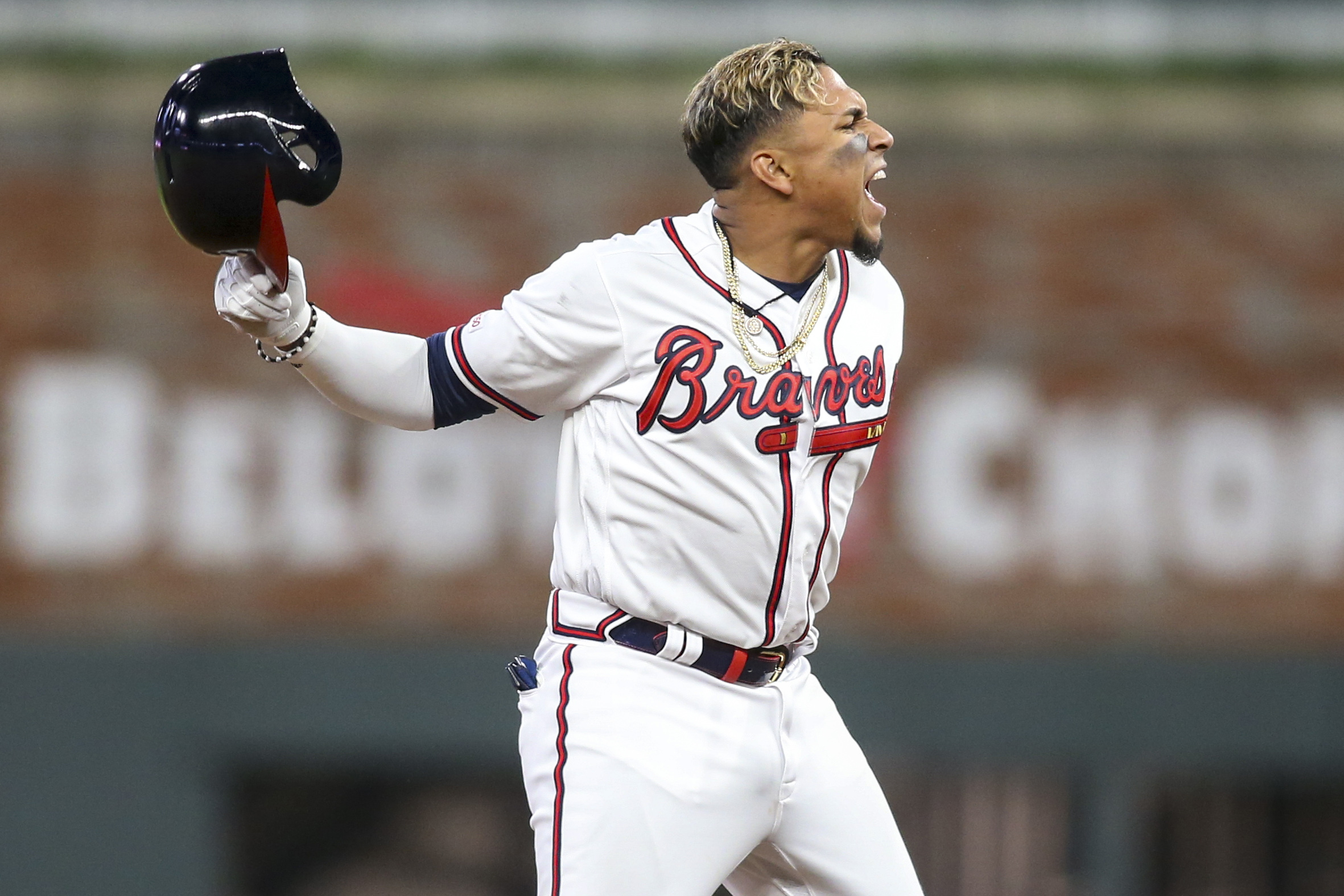 The Chicago Cubs have surprisingly been just a wonderful palate cleanser after the horrors for the Phillies series. First, on Monday, they threw the ball around and were embarrassed 8-0. Then, last night, as the Braves’ bullpen again struggled, the Cubs equally maligned bullpen went to pieces and Johan Camargo made his first hit of the year count in a big way as the Braves scored four eighth-inning runs to rally past Chicago.

Julio Teheran started and while his average fastball velocity was down a tick from his opening day effort, his slider remained effective. Teheran also mixed in his changeup far more compared to his first start when he was essentially a two-pitch pitcher. For the game, Teheran scattered a half-dozen hits and a run while striking out seven in five innings. That five inning effort would be a bit controversial as fans suggested Teheran could have gone longer. To be fair, 91 pitches in five innings is the definition of laboring and his velocity on his fastball was wavering in the fifth inning.

But hard to suggest he couldn’t have been better than Jonny Venters in the sixth. As I cuddled with a sick child keeping track of the game on my phone, I wondered why Venters was allowed to face Willson Contreras in the sixth. To be fair to Brian Snitker, Contreras was the only right-handed hitter who started the game and hit lower than fourth. If there was ever a spot for Venters, this was it. Unfortunately, Venters’ sinker got lit up by Contreras after Kyle Schwarber worked the dreaded leadoff walk. Down 3-0, Venters got a call high in the zone to extend the at-bat against the Cubs catcher. He then grooved another sinker right down the pipe and Contreras didn’t miss. Venters would only retire one of the four lefties he faced, leaving with two runners on and the Cubs on top 3-2. Wes Parsons saved him, and the team, from an even higher ERA.

The Cubs weren’t done against the Braves’ southpaws. Jesse Biddle gave up a hard single to Anthony Rizzo and with two outs, Contreras singled as well. A wild pitch plated a run to make it 4-2. In the 8th, Braves fans were ready to start talking about needing to win on Thursday to win the series as Luke Jackson entered. But Jackson worked around a leadoff single to keep the deficit at two runs.

And then the bottom of the 8th happened. Braves fans are used to a bullpen implosion, having seen several during last year and already this season. What Atlanta fans aren’t used to is watching the other team implode. Steve Cishek threw three strikes. To three batters. While walking the bases loaded. Harry Doyle was nowhere to be found during the sequence. Joe Maddon’s only arm that was ready to try to navigate out of this disaster was Randy Rosario, who entered to face Johan Camargo. This is the same Camargo with a .315/.365/.554 triple slash against left-hand pitching entering 2019. Predictable result was predictable as Camargo drilled the ball to the right-center gap. It was blasted so well that even Nick Markakis was able to score from first base to unload the bases and make it 5-4. Tyler Flowers would single, chasing Camargo to third, where he would score on a Dansby Swanson sacrifice fly to make it 6-4.

As he’s prone to doing, Arodys Vizcaino made it a bit interesting in the ninth, walking Anthony Rizzo with one out and facing Javier Baez and Schwarber as both represented the potential tying run. Vizcaino struck out both swinging to put the game on ice.

Swanson’s eighth-inning RBI was not his only RBI of the day. In the third, he erased an early deficit Atlanta faced with an opposite-field homer. It was the first time he went the other way on a home run in a game that actually mattered. After Jon Lester retired Teheran to follow, he had Ozzie Albies down 0-2 before trying to put him away. The ball was supposed to be on the inside corner, but it turned into a high fastball over the outside corner. Albies crushed his own opposite-field dong.

It was a small change, but Atlanta’s lineup finally looked a little different after the pitcher/catcher battery being the only thing that changed over the first four games. Johan Camargo got his first start of the year, playing left field. That shifted Ronald Acuña Jr., fresh off his new extension, to center field. In addition, Camargo hit sixth while Ozzie Albies, who regularly hits sixth, moved to leadoff.

None of this was that surprising. Camargo seems likely to play in left or right field against lefties and Snitker was already on record with saying Albies would likely hit first against lefties. Of course, if Albies continues to do the stuff he did on Wednesday (three hits, a homer, a steal, and a walk), he may start to get more opportunities in the leadoff spot even when a southpaw isn’t on the mound.

Albies has been a force early on. He has hits in all five games, including back-to-back three-hit outings, and has walked in four consecutive games compared to only one strikeout in 22 plate appearances. I am going to keep saying it, but in my mind, no Braves position player is more important than Albies. If he continues to show sustained progression at the plate, he is a dynamic threat that compliments the other Braves’ big bats well.

Back to Camargo – his first start in left field was pretty unnoteworthy. In eight innings, he made a pair of putouts. But that’s kind of what you want. Camargo may or may not be a plus in left field. My instinct is that he won’t be. But as long as he’s not a negative, he gives the Braves a real boost off the bench – especially against lefties.

It looks as if A.J. Minter will be activated off the Injured List today. Getting the boot will likely be Bryse Wilson, who was packing up his things at SunTrust Park following the game. He’ll likely join Gwinnett, whose season begins today. Wilson, of course, started the second game of the year and flashed a few positives despite battling his stuff the entire game.

Minter had been expected to join Gwinnett to open the year as well, but he convinced the Braves he was ready to rejoin the club before needing a rehab stint. Adding Minter will be a big deal for a bullpen that has struggled mightily for the most part this season. Minter is probably the favorite to pitch the ninth inning today if the Braves have a lead to protect after Vizcaino worked the last two games.

Another move will likely be made tomorrow as Kevin Gausman is activated. The Braves have said they will go with their best 25-man roster. If they hold to this, the trio of Josh Tomlin, Shane Carle, and Luke Jackson should be reduced to a duo with Max Fried, who starts today, remaining with the team. If they are playing the “who still has options?” game, Fried would seem like the guy to demote before the Marlins series begins tomorrow.

-We do plan on rolling out some minor league previews, though due to things out of our control, it looks like we won’t beat the first pitch of minor league opening day – which is today! However, expect some previews this weekend.

-Did you miss by look at Acuña Jr.’s extension? Give it a read here.

-The Braves go for a sweep and try to get to .500 later this evening as they take on the Cubbies once again. Max Fried gets the start for the Braves. There is some debate how long he can go after throwing eleven pitches on opening day out of the pen and 25 pitches three days later in a second bullpen appearance. He also warmed up during the Phils’ series, but wasn’t used. The Cubs will counter with Yu Darvish, who walked seven Rangers in 2.2 innings during his first start.

-And here is some Dansby power for your day.