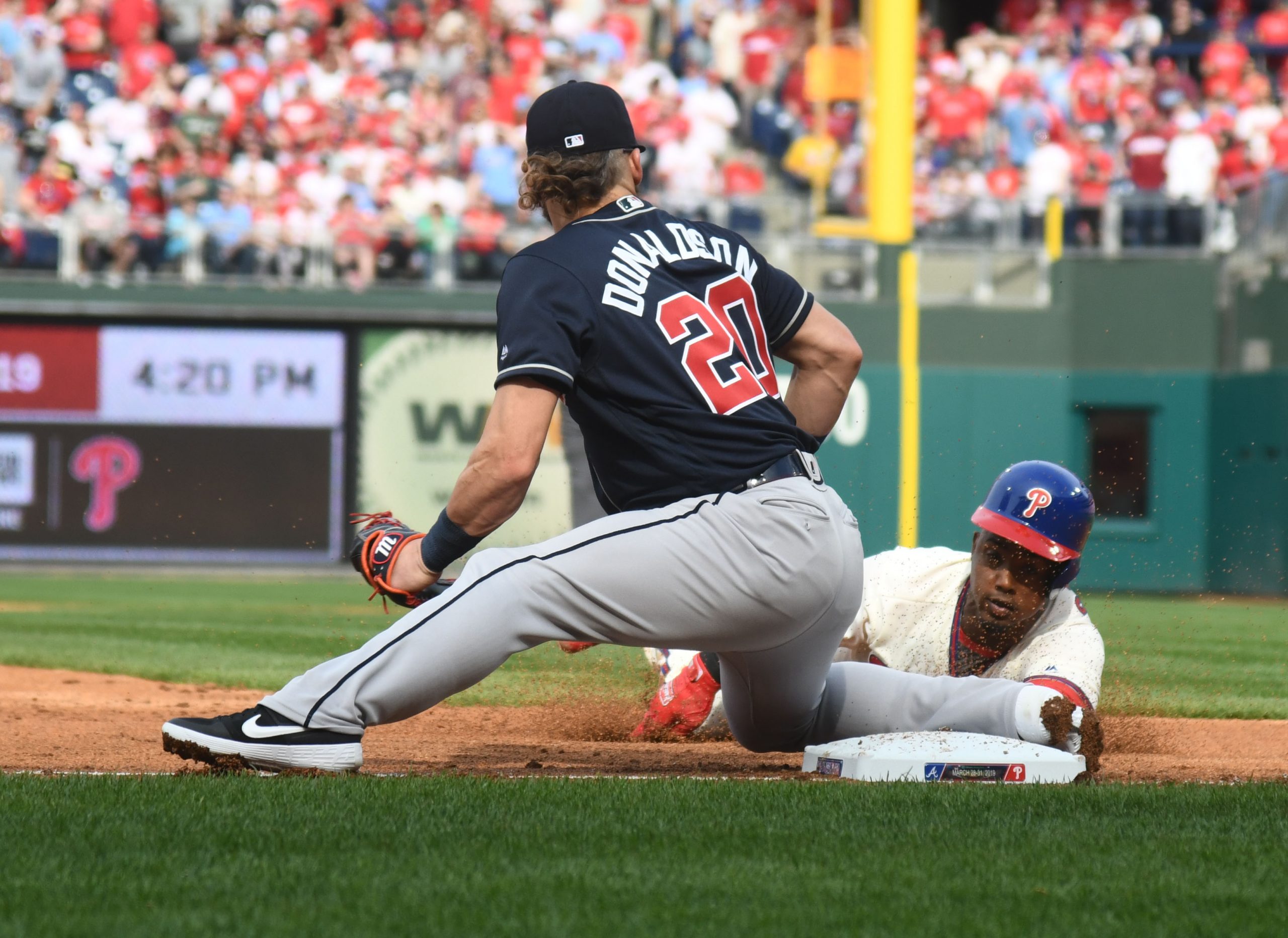 As Saturday afternoon’s game moved through the second inning and Dansby Swanson’s dinger cleared the left field wall, it felt like Thursday’s opening day issues were being put behind the Braves and they were headed to a 1-1 start with one of their young guns, Bryse Wilson, making the Phillies’ talented lineup look stupid. And then…things happened and the stupid money the Phillies dished out this offseason started to pay dividends. The script is already a little predictable for Braves’ fans.

After Ender Inciarte tripled and scored the first run on Freddie Freeman’s first hit – he’d have three more – and Swanson’s homer followed a single by Tyler Flowers, Wilson tried to make the 3-0 lead stick. He immediately gave up a run in the second, but was helped out by the Phillies running into an out and strangely taking the bat out of Maikel Franco’s hands when they were successful in swiping a bag.

In the fourth, things unraveled after Wilson K’d J.T. Realmuto to open the inning. Wilson, who never seemed to have command on any of his pitches consistently, lost Odubel Herrera before giving up a soul-crushing triple despite having Cesar Hernandez down to his last strike. And then, he served up a gopher ball to Franco that put the Phils ahead. Wes Parsons closed out the frame and the Braves would get Wilson off the hook with an Inciarte walk, steal, and another hit by Freeman to make it 4-4. But they couldn’t get closer and when Parsons lost Rhys Hoskins with two outs on yet another walk, Realmuto put the Phils up for good with a two-run homer.

Bryce Harper made it 7-4 with a homer that still hasn’t landed in the seventh against Jesse Biddle, whose reverse splits nature continue to make him unreliable against lefties. And in the 8th, for reasons that defied logic, Brian Snitker took out Chad Sobotka and went with Josh Tomlin to get one out. Tomlin gave up a single and with two outs in the frame registered by Sobotka, Franco launched a flyball to short right field right at the foul-line that neither Freeman, Ozzie Albies, nor Nick Markakis could make a play on. That scored Hernandez all the way from first to make it 8-4.

That would be huge in the ninth because after Swanson opened the inning with what seems like the 50th walk of this series, Charlie Culberson hit a two-run homer to cut the four-run deficit in half. Freeman picked up his second double to bring up Ronald Acuña Jr. with a chance to tie it, but he flied out to Harper to end the game.

All told, the Braves banged out eight hits and walked four times to score four runs. Freeman went 4-for-5 with Flowers adding two singles. But other than Jonny Venters (one out) and Chad Sobotka (three outs), the Braves couldn’t avoid giving up runs.

While it may have ultimately not been a big deal, there was one moment where it looked like the Braves had a rally going only for it to short-circuit.

With one out, Ozzie Albies hit a sharp single to center field as he continues to show a better approach and better contact from the left-side of the box. Flowers worked the count in his favor before finding a hole up the middle for his second hit of the game. Albies aggressively took third on the play, putting runners on the corners with one out and Swanson at the plate. Just a couple of innings before, Swanson took Nick Pivetta deep. With the Braves up 3-1, could he do more damage?

With the count 2-1, the Braves called a squeeze. Albies took off for home and Swanson tried to put a bunt down. He looked uncomfortable with it and almost panicked. He fouled off the slider, saving Albies. He’d strike out on the next pitch. Wilson struck out to end the threat.

Obviously, if the execution is there, you could steal a run. But you also forced Swanson to try to bunt a pitch that was well outside, giving up a strike and forcing him in a more defensive 2-2 count rather than a potentially aggressive 3-1 count. Perhaps Pivetta walks Swanson and loads the bases with one out for Wilson. As long as a double play doesn’t happen, even if Wilson is retired, you give Inciarte a chance to do some damage with two outs. Or maybe Pivetta tries to get a fastball by Swanson on 3-1 and the former number one overall pick smacks it for at least one RBI.

This mistake was only amplified by the fact that the Phillies would score three runs in the bottom half of the frame to take the lead. Hopefully, we don’t see such calls continue by the Braves.

Much has been made about the Phillies’ Big Four winter pickups that have changed their lineup – Harper, Realmuto, Jean Segura, and Andrew McCutchen. Through two games, all but Segura have homered. The Braves also made a big off-season pickup, but Josh Donaldson is still hunting for his first hit. More confusing was that he was removed from the game in the 7th for a double switch. On one hand, it kind of worked. Culberson, who replaced Donaldson at third and was in the nine-spot, hit a two-run homer in the ninth.

Along with the decisions to try to get Josh Tomlin to get one out and the squeeze play, Brian Snitker had a few head-scratching decisions that all seemed to go against the Braves.

While the Braves pitching staff is struggling in Philly, some arms took steps toward returning over the last couple of days. Staff ace Mike Foltynewicz started a minor league spring game and 43 pitches while nearing finishing the third inning. He’ll shoot to increase the workload into the 60s-70s next time out in the Gwinnett opener on Thursday. He’ll likely make one more start after that as he tries to show he can throw 80+ pain-free pitches.

A.J. Minter worked a game today and threw 20 pitches. He’ll likely pitch at least once for Gwinnett and will hopefully return to a beleaguered pen next week. Starting today’s game was Kevin Gausman and he threw 90 pitches. Provided he feels no issues, he’ll start Friday against the Marlins.

There remains no time table for Darren O’Day. After the game, Brian Snitker made reference to getting “those three guys back.” That refers to Foltynewicz, Minter, and Gausman. O’Day was supposed to be a key addition to the bullpen for 2019 after not pitching following the trade from the Orioles last summer as he rehabbed a hamstring injury. In fact, the Braves often passed O’Day off as a big relief pitcher acquisition. Right now, it remains a question when, and even if, the righty will throw for the Braves.

-During the second inning of yesterday’s game, Chip Caray and Jeff Francoeur engaged in a introduction into Fielding Independent Pitching, or FIP, and how it can be used. This was something we never saw with Caray and Joe Simpson, who often ridiculed advanced metrics even as the team quite embraced it. Early reviews of the Caray/Francoeur duo have been mostly positive. Even reviews of Simpson on the radio with Jim Powell have been solid. It appears that the long-time pair, broken up by Fox Sports during the offseason, might be best for everyone involved.

-The Braves will try to avoid the sweep this evening on ESPN as Kyle Wright makes his first major league start. He’ll face Jake Arrieta.