Mr. Sidney Rice you are the man 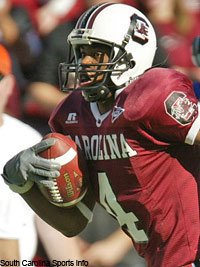 Sidney Rice has played in only 10 games in his collegiate career, and the record books are already bowing under the weight of his success.

So much for the freshman learning curve.

The redshirt freshman receiver for South Carolina hasn’t just carved a niche for himself in the Gamecocks’ offense – he has established himself as the go-to guy in Steve Spurrier’s attack, earning the Rivals.com National Freshman of the Year award.

His victory was a narrow one over Northwestern true freshman running back Tyrell Sutton, who led all freshmen in rushing (1,390 yards) and scoring (18 touchdowns). Ultimately the decision went Rice’s way because he didn’t have the weapons around him that Sutton did and his impact in South Carolina’s biggest victories was significant.

Rice led the Southeastern Conference in receiving yards (952) and touchdowns per game (1.2). His 12 receiving TDs set a single-season record for South Carolina. Rice established another Gamecocks record by catching touchdown passes in eight consecutive games. And if that’s not enough, Rice is only two touchdowns shy of the national freshman record of 14.

But the evidence of Rice’s impact goes well beyond mere stats, as South Carolina has suddenly emerged as a force to be reckoned with in the SEC East. The Gamecocks knocked off then-No. 23 Tennessee in late October for South Carolina’s first ever victory at Neyland Stadium. The Gamecocks proceeded to drop then-No. 12 Florida for the first time in more than 65 years two weeks later.

Rice was instrumental in both victories. He caught eight passes for 112 yards and scored both touchdowns in the 16-15 win over the Volunteers, and racked up another 112 receiving yards in the 30-22 win against Florida.

“There were two really big highlights for me this year,” Rice told Rivals.com. “The biggest ones were when we beat Florida and when we beat Tennessee. It wasn’t as much about any plays that I made or anything like that. It was just the fact that we won those games.”

Statistically speaking, the peak of Rice’s season came against Vanderbilt. The Commodores, fueled by their own star freshman receiver, were gunning for a shot at postseason play. Vanderbilt’s Earl Bennett rose to the occasion, pulling down 16 catches for 206 yards and a touchdown. Not to be outdone, Rice made the most of his eight catches by piling up 132 yards and three touchdowns, including the game-winner.

Not surprisingly, Rice credits much of his success to the head ball coach.

And though his improvement throughout the season has been quite apparent, Rice isn’t ready to rest on his records just yet.

“I look at this as the point that can make or break me. I can either relax and be content with what I have done or I can work even harder and strive to get better. That’s what I want to do. I want to just keep getting better at every part of my game.”