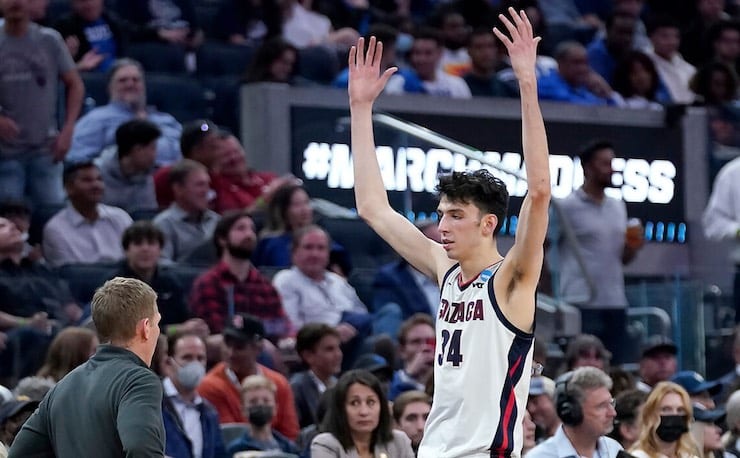 The NBA draft is set to begin on June 23 and Chet Holmgren out of Gonzaga is someone who could potentially be the first or second pick in this year’s draft. Continue reading below to get information about Chet Holmgren and why he’s going to be a great fit in the NBA.

How to Bet on Chet Holmgren in the 2022 NBA Draft

Chet Holmgren is predicted to be the number 2 pick according to most sports books and scouts. After the season he had at Gonzaga and still being as young as he is with his athleticism and size, it certainly makes sense why scouts are valuing him as high as they are.

Chet Holmgren currently has the second-best odds to be the number 1 pick in this year’s draft. Some are saying that he could go number 1 to the Orlando Magic, but most are saying that he’s going to fall to number 2 and be drafted by the Oklahoma City Thunder.

Let’s take a look at Chet Holmgren’s information below.

There’s plenty to like about the 7-foot Chet Holmgren. His best trait is undoubtedly his length and agility. For a 7-footer who’s still only 20 years old, what he can do on the court is certainly impressive. He doesn’t move as well as a guy like Giannis Antetokounmpo at that size, but he certainly has the potential to do so in the coming years. Another thing that is impressive is his ability to shoot the 3-point shot.

In today’s game, most centers and forwards are shooting the 3-point shot at least at a 30% clip. At Gonzaga this year, he shot 39% on 105 attempts. His ability to stretch the floor is going to make his NBA transition much easier.

He might have to put on a few pounds, but at the end of the day, what he did at Gonzaga this year was impressive on that side of the ball and there’s really no downside to his game, or to be worried about his interior defense.