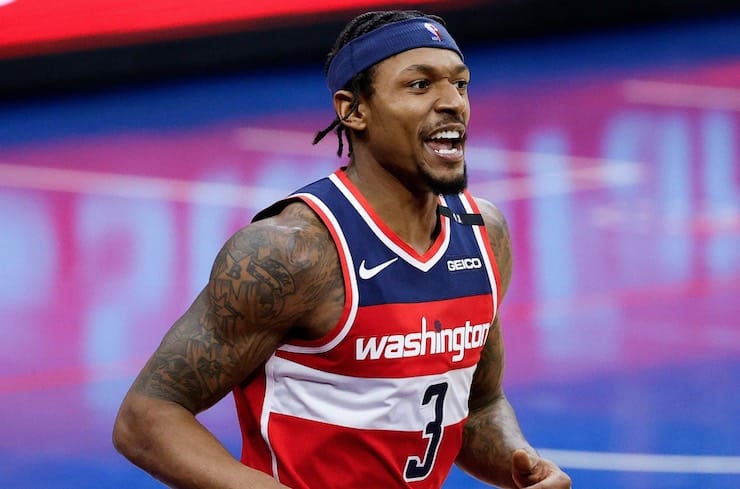 Bradley Beal is set to be one of the NBA’s top free agents this summer after declining his player option with the Washington Wizards. However, with deep ties to Boston Celtics’ forward Jayson Tatum, Beal’s mind might already be made up. According to sources, the Boston Celtics have a 25% chance of signing Bradley Beal to a long-term deal. Scroll down below for a complete breakdown of the Bradley Beal next team odds and to find out which teams have the best chance to former All-Star guard.

Bradley Beal decided that winning was more important than signing a max deal on Tuesday.

Despite turning down a hefty sum, Beal still has the option to sign a five-year max deal worth $248 million. As a result, he is expected to return to the Wizards. However, if he chooses not to and entertains free agent offers, he can play on a four-year deal somewhere else.

Beal was drafted by the Wizards with the No. 3 overall pick in the 2012 NBA Draft.

Boston Celtics Emerge as the Favorites to Sign Bradley Beal

While Beal is expected to return to Washington on a max deal, there are rumors that he could choose to join a contender instead.

After a trip to the 2022 NBA Finals, the Boston Celtics have emerged as the odds-on favorite to land Beal if he decides to leave.

BetOnline, one of the best NBA betting sites, has given the Celtics +300 odds of signing Beal, the best of any team in the league.

At +300, the Celtics have about a 25% chance of signing Beal during the offseason.

Boston could have used Beal’s shooting and all-around offensive game during its recent NBA Finals run.

With fellow St. Louis-native Jayson Tatum leading the way, the Celtics came two wins away from winning the 2022 NBA Championship.

Beal and Tatum have known each other since childhood.

Beal babysat Tatum as a toddler and later became like a “big brother” to Tatum during his teenage years.

With Tatum entering the prime of his NBA career, Beal could use this as another opportunity to take his little brother under his wing as they try to compete for an NBA title.

Below, we’ll go over the likely landing spots for the Wizards guard by taking a look at the Bradley Beal next team odds from BetOnline.

Beal seems likely to either stay in Washington or join forces with Tatum in Boston.

However, this wouldn’t be the first time that an NBA free agent came to a shocking decision over the summer.

If Beal doesn’t end up in Washington or Boston, there are a few other likely scenarios.

According to sources, Portland, Miami, and Los Angeles are other potential landing spots for Beal.

Portland has about a 20% chance of signing Beal while the Heat have the next-best odds of signing Bradley Beal at 16.7%.