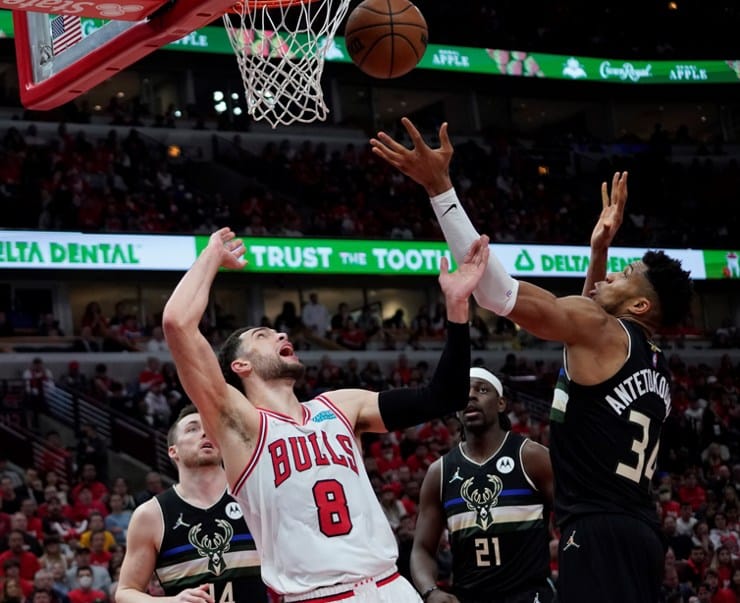 On April 27, the first round of the 2022 NBA Playoffs continues; free NBA player props, odds and best bets are posted here. On Wednesday, two matchups are scheduled for Game 5. First, the Chicago Bulls are facing off versus the Milwaukee Bucks at 7:30 p.m. ET.

Then, the Denver Nuggets play the Golden State Warriors at 10 p.m. ET. This doubleheader can be watched live via TNT. BetOnline odds and NBA player props for Game 5 are available below. YouTube TV and Hulu with Live TV offer free trials for streaming. Read other NBA betting picks and sports betting content under the NBA tab.

To kick off today’s NBA prop bets, all eyes are on the Greek Freak. He is averaging 27.5 points, 14.5 rebounds and seven assists per game in this playoff series. In Game 1, Antetokounmpo put up 27 points in 34 minutes played. He was the leading scorer. However, the Bulls’ DeMar DeRozan finished with a game-high 41 points in Game 2. Giannis contributed 33 points. Then, while the six-time All-Star accumulated 18 points in Game 3, Grayson Allen scored a team-high 22 points.

Additionally, in Game 4, the ninth-year veteran led all other players in scoring with 32 points. Keep in mind, however, Giannis has to be the points leader for both games today. Otherwise, the gambler will lose. So, will the Greek Freak score more points than Klay Thompson and Stephen Curry tonight? It’s difficult to say. Nikola Jokic had 37 points in Game 4, while Curry also scored a team-high 33 points. In short, take the under and say no.

Furthermore, with Zach LaVine sidelined due to the league’s health and safety protocols, bettors are wondering how DeMar DeRozan will rise to the occasion tonight. After all, this is an elimination game for the Bulls. In the first contest of this series, Nikola Vucevic led Chicago in rebounds with 17. LaVine finished with 10 rebounds as well. As for DeRozan, he had a total of eight.

Next, in Game 2, the guard ended his outing with seven rebounds. In the following contest, the five-time All-Star closed out his performance with five rebounds. On Sunday, DeRozan finished with five rebounds again in Game 4. Considering LaVine is out, there is a good chance that DeMar will have at least six rebounds tonight. Vucevic and Williams can only do so much. Think about taking the over.

Lastly, Warriors’ guard Stephen Curry is averaging 27.5 points, three rebounds and 5.5 assists per game in this playoff series. For long-range shots, the guard is averaging 4.5 threes per game. According to the player statistics database, Curry has a total of 43 games this season with at least 3.5 successful 3-point shot attempts. Not to mention, the 13th-year player sank a total of 285 threes in the regular season, leading the NBA.

Nonetheless, will the guard make at least four 3-pointers against the Nuggets in Game 5? That is the question here. Curry made three shots from beyond the arc in Game 1, five in the next contest, three in Game 3 and three in Sunday’s game. Feel free to take a risk for this one. While he has not nailed five threes since Game 2, that means he’s due for another standout performance. Take the over.