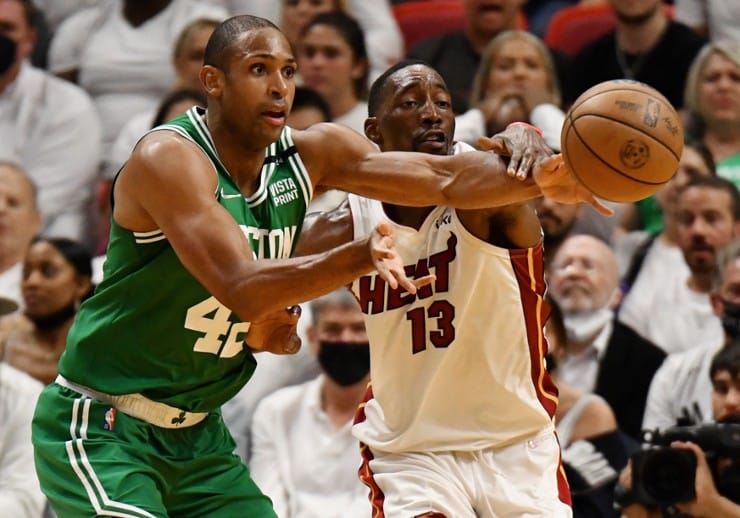 On Wednesday, May 25, the Eastern Conference Finals of the 2022 NBA Playoffs continues today; NBA player props bets, best NBA bets and odds for Game 5 are available here. Tonight, the Boston Celtics are playing the Miami Heat in Game 5 at 8:30 p.m. ET. The Celtics vs Heat matchup will air live on ESPN.

BetOnline and MyBookie are offering $1,000 bonuses today. Along with Bovada, these sportsbooks listed below are the best for NBA betting during the 2022 NBA playoffs. Click below to register.

Heading into Game 5 of the Eastern Conference Finals, our basketball analysts have picked the top NBA player props bets for the Celtics vs Heat contest. Including the Celtics winning tonight, will Jayson Tatum also score at least 25 points?

Plus, can Heat center Bam Adebayo finish with a minimum of nine rebounds at FTX Arena? Will Al Horford have at least three assists in Game 5? Read the predictions below. More NBA player props bets are on the main page.

First, one of our three NBA player props bets for Game 5 concerns Celtics guard Jayson Tatum. The fifth-year player is averaging 24.3 points per game against the Heat in this Eastern Conference Finals series. In Game 1, Tatum finished his performance with 29 points at FTX Arena. Then, he put up 27 points in Game 2. However, the three-time All-Star only scored 10 points in Game 3.

Next, on Monday night, Tatum closed out his Game 4 outing with 31 points at TD Garden. For this bet to pay off, the guard has to score at least 25 points and the Celtics need to win. He has generated a minimum of 25 points in both road games against the Heat. But can Boston win two straight contests in this series? That’s the ultimate question. If you can’t trust the Celtics to win, skip over this player performance doubles bet.

RELATED: How To Watch NBA Playoffs And Stream NBA Game Today For Free May 24

Furthermore, Heat center Bam Adebayo is averaging 7.3 rebounds per game versus the Celtics in the Eastern Conference Finals. In Game 1, the fifth-year player accumulated four total rebounds. Then, Adebayo amassed nine rebounds in the following contest. After that, the center finished with 10 rebounds in Game 3. Of course, on Monday, Adebayo had six rebounds in Game 4.

Since the Heat are back at FTX Arena for Game 5, gamblers might prefer this NBA player prop over all the other ones. Miami is 10-1 in its last 11 games played at home. His biggest blunder in this series was finishing with just four rebounds in Game 1. And Jimmy Butler led Miami in rebounds with seven in Game 4. Considering the statistics above, take the over. Adebayo could finish with nine rebounds in Game 5.

Lastly, Celtics center Al Horford is averaging three assists per game in this Eastern Conference Finals series. In each game against the Heat, the 15-year veteran ended his performance with exactly three assists. During the regular season, the five-time All-Star averaged 3.4 assists per game.

Therefore, feel free to place your money on Horford to finish with a minimum of three assists in Game 5. For a reminder, the center played 33 minutes in Game 1, 42 minutes in Game 2 and 33 minutes in Game 3. Assuming he stays healthy, it is a logical bet, and this is one of the best NBA player props bets for tonight’s Celtics vs Heat contest.