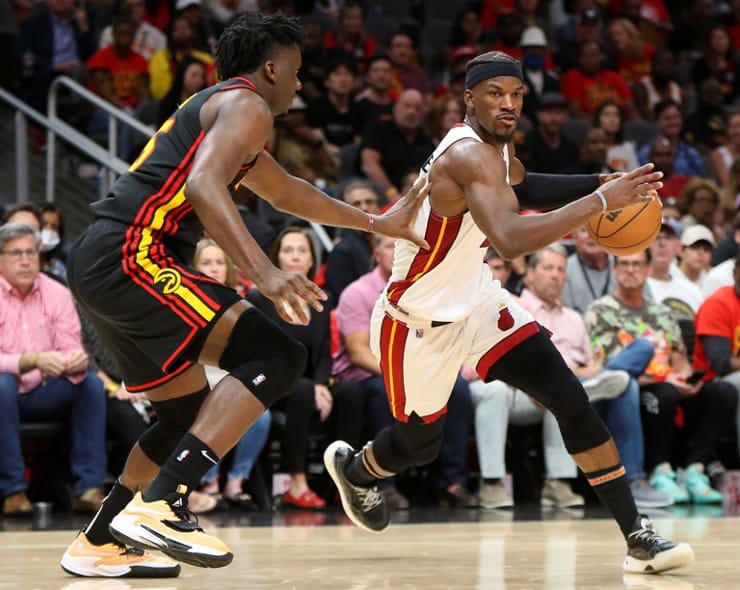 On Tuesday, three contests are scheduled for Game 5 of the first round of the 2022 NBA Playoffs; free NBA playoffs first round picks, Game 5 best bets and odds are posted here. Our experts at The Sports Daily have picked the winners of today’s contests.

BetOnline odds and free NBA playoffs first round picks are featured below. YouTube TV, fuboTV and Hulu with Live TV offer free trials for streaming. If you demand more basketball-related articles, other NBA betting picks and sports betting content is on the main page

For today’s first-round Game 5 contests of the 2022 NBA Playoffs, the Atlanta Hawks are playing the Miami Heat at 7 p.m. ET. This game can be watched live on NBA TV. Next, the Minnesota Timberwolves square off against the Memphis Grizzlies at 7:30 p.m. ET. Then, the New Orleans Pelicans take on the Phoenix Suns at 10 p.m. ET. The Timberwolves-Grizzlies and Pelicans-Suns games will air live on TNT.

Heading into tonight’s rematch, the Heat are aiming to defeat the Hawks in this series to advance to the next round of the playoffs. They are 6.5-point favorites at home. In Game 4, Miami defeated Atlanta 110-86 at State Farm Arena. Jimmy Butler led his team across the statistics sheet, finishing with 36 points and 10 rebounds in 36 minutes played. The Heat outscored them 30-15 in the fourth quarter.

Furthermore, the Hawks have three players listed on their injury report: SG Lou Williams (out), C Clint Capela (questionable) and SG Bogdan Bogdanovic (questionable). The team could definitely use both Capela and Bogdanovic tonight. Atlanta is 1-3 in its past four contests. Not to mention, the Hawks are 1-4 ATS in their last five games played against the Heat.

Additionally, the Heat have three players listed on their injury report: PF P.J. Tucker (questionable), PG Kyle Lowry (out) and SG Caleb Martin (questionable). Due to a leg injury, Lowry was downgraded to out. Regarding other important betting trends, Miami is 9-2 ATS in its previous 11 games played. In Heat’s past five games against the Hawks, the total has gone under.

Concerning the point spread consensus, 72% of bettors are expecting the Heat to cover the spread at FTX Arena. As for the point total consensus, 62% of gamblers are leaning towards the total going under 217. Taking everything into account, pick the Heat to advance, they will cover the spread and the total will go over 217. Other NBA playoffs first round picks, Game 5 best bets and odds are on the main page.

Moving on to the next game, the Grizzlies are fighting to take the lead in their series versus the Timberwolves. They are six-point favorites at home. However, Minnesota is hanging in there. While the team has a healthy roster, it has failed to cover the spread in multiple away matchups. The Timberwolves are 1-6 ATS in their last seven meetings on the road against the Grizzlies.

On Saturday, the Timberwolves defeated them 119-118 at Target Center in Game 4. Karl-Anthony Towns led Minnesota in scoring with 33 points. The team shot 47.3% from the field and 50% from downtown. Now, the Timberwolves are 4-10 in their past 14 matchups versus the Grizzlies. Plus, they are 5-13 ATS in their previous 18 meetings.

Moreover, the Grizzlies have two players listed on their injury report: C Killian Tillie (out) and PF Santi Aldama (out). Tillie was downgraded to out because of his back, whereas Aldama was downgraded to out due to a knee injury. Memphis has struggled to win close contests on the road, but the team is still a difficult contender to beat at home. The Grizzlies are 11-2 in their past 13 games played at FedExForum.

For the point spread consensus, 58% of gamblers are hoping the Timberwolves will cover the spread on the road. On the flip side, 52% of bettors are thinking the point total will go under 232. All things considered, pick the Grizzlies to win tonight, they will cover the spread and the total will go under 232. Other NBA playoffs first round picks, Game 5 best bets and odds are on the main page.

Lastly, the Pelicans are attempting to stay alive in their series against the Suns. This playoff series is surprisingly interesting. The Suns are 6.5-point favorites at home for Game 5. On Sunday, New Orleans bested Phoenix 118-103 at home in Game 4. Brandon Ingram generated 30 points in 36 minutes played. Also, the Pelicans outrebounded them 48-39.

Thus far, the Pelicans are 5-10 ATS in their previous 15 matchups versus the Suns. Upon further review of the Pelicans’ injury report, nothing has changed. Since the series is tied, New Orleans still has a fair chance of pulling off another upset win in this series. Though, the team is 5-10 in its last 15 meetings against Phoenix.

Meanwhile, the Suns have two players listed on their injury report: SG Devin Booker (out indefinitely) and PF Dario Saric (out indefinitely). Without Booker, his teammates will be forced to step up their performances. Deandre Ayton contributed 23 points in Game 4. But it is imperative that Chris Paul comes alive now more than ever. If Paul cannot take control of this series, the Suns will be doomed.

Booker is clearly the MVP of this team. To add to the betting trends above, the Suns are 13-6 in their past 19 contests. And the total has gone under in eight of Phoenix’s last 12 games. In short, pick the Suns to bounce back tonight, they will cover the spread and the total will go over 215. More NBA playoffs first round picks, Game 5 best bets and odds are on the main page.

BetOnline is one of the best sportsbooks in Arizona, Florida, Georgia, Louisiana, Minnesota and Tennessee.