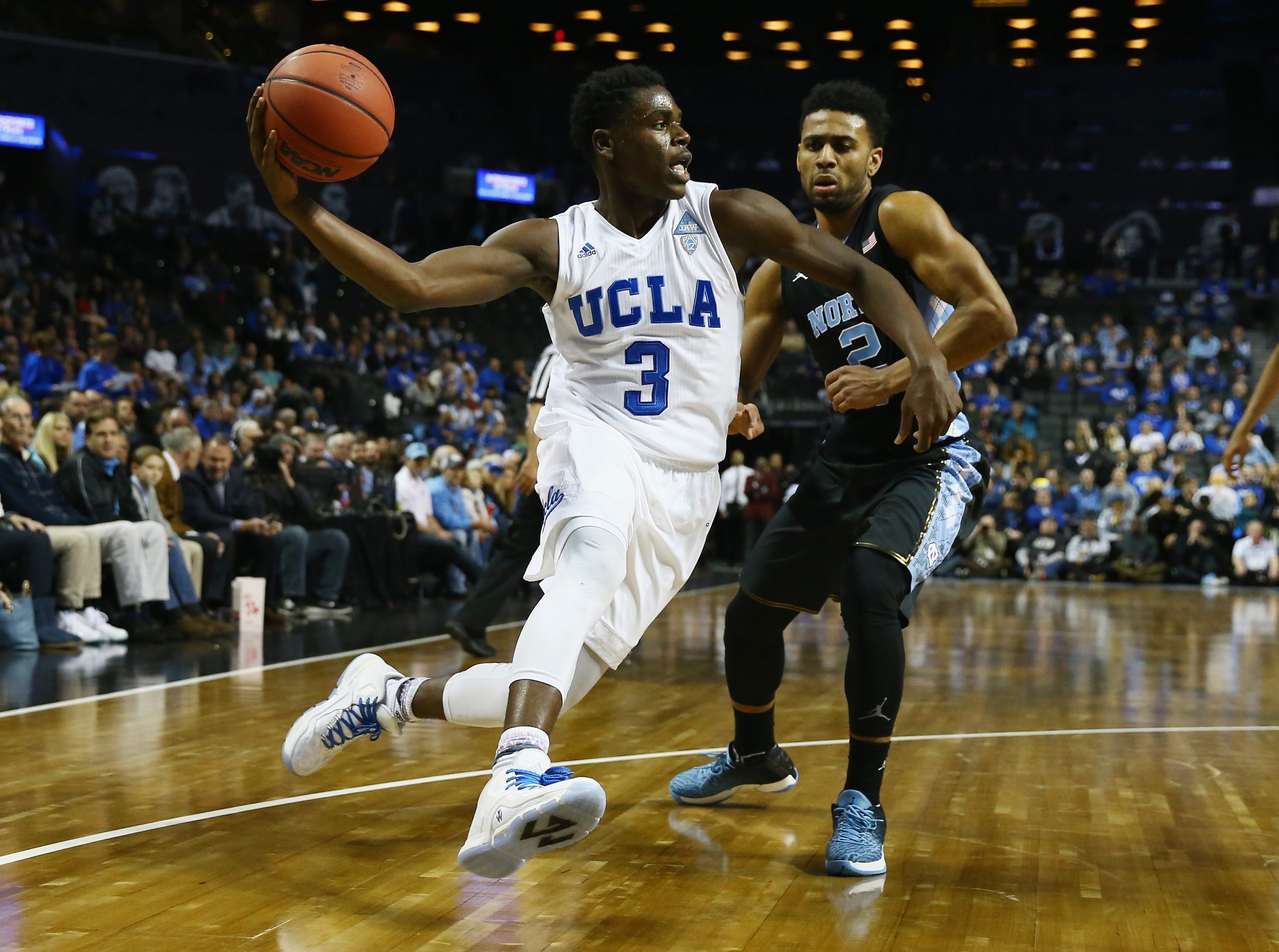 In such a deep draft class, there should be more than enough talent to go around, which is good news for bad teams without a lottery pick (cough, Brooklyn).

It has been an exciting opening month of college basketball, and many of the top-flight schools with rich hoops histories have quality NBA prospects. Here’s my take on several players from Villanova, Duke, UCLA, Indiana, and Wisconsin who likely won’t be lottery picks, but could ultimately stick on the world’s largest stage.

Prior to his unbelievable buzzer-beating shot in last year’s title game, Jenkins was a name that was seldom heard when it came time to talking about the next level. However, the 6-6, 240-pound forward might have the savvy, strength, and shooting to survive at the next level. He doesn’t play above the rim, but Jenkins brings toughness in spades and knows his role. Jenkins reminds me a bit of “Iron Man” Wesley Matthews (6-5, 220 lbs.), who went undrafted back in 2009, but nevertheless has gone on to enjoy a successful career. Now 30 years of age, Matthews has made an inspiring comeback from a torn Achilles, and he is hoisting a career-high 13.3 field-goal attempts per game (8.1 of which are from beyond the arc) for the Dirk-less Dallas Mavericks. Jenkins is currently draining 2.8 treys per game on 43.7 percent, and he could be another bulky 3-and-D guy who slips under the radar on draft day despite boasting an impressive collegiate rèsumè.

TLM’s Quentin Haynes wrote about Hart in his sleepers column pre-season, while at the same time questioning whether Josh could still be considered one. Hart is still a second-rounder in plenty of respectable mock drafts circulating the web, and it’s possible that there will be at least 30 players from this draft who have better NBA careers than Hart. However, in my opinion whoever snags him is getting a steal. Entering the year I was curious to see if Hart could take his off-the-bounce game to a new level, and he has. As a somewhat undersized shooting guard Hart projects as a mishmash of Courtney Lee and Avery Bradley, with a body similar to the former and the handles more closely resembling the latter.

Bridges is one of the best slashers in college basketball. His athleticism and physical profile shout slimmer Rodney Carney, but Mikal is a much smoother operator than the former Memphis forward and first-round bust. Bridges glides with glee, giving opponents fits with his 7-0 wingspan and defensive energy. He is also connecting on 62 percent from the field, and he has improved his three-point shooting from 29.9 percent last year to 37.9 percent. While the latest mock for DraftExpress (from Dec. 5) doesn’t feature Bridges inside the top 60, our friends at FanSided have him at No. 23 and our own Ilia Shatashvili has him in the second round.

Allen is a bigger and even more annoying version of Danny Ainge, a pest who pisses his opponents off with ridiculous, unnecessary, and sometimes unsportsmanlike shenanigans. Like Kennard, he will need to get stronger in order to survive at the next level, but Allen is much more explosive, athletic, and versatile than Kennard. Most mocks have Allen as a fixture in the first round, and the package of grit and skill he provides could be a benefit to the team that drafts him for the next decade.

Jackson has decent size at 6-4 with nearly a 6-7 wingspan, and his selfless, whatever-it-takes playing style has me thinking he’ll be a late first-round pick for the San Antonio Spurs in a couple summers a-la Corey Joseph. He isn’t being asked to create much offense for his teammates right now and most experts expect him to stay in school another year, so it will be interesting to see how he does next year if Grayson Allen is gone.

The Bruins have been my early favorite in terms of watchability, with one lineup in particular stealing the show. Understandably, it has been the remix of Jason Kidd and Steph Curry (Lonzo Ball) who has received most of the credit. Still, it has been a total team effort for the Bruins. Freshman T.J. Leaf is like Christian Laettner, sophomore Aaron Holiday is a longer Ty Lawson with the gusto of an Avery Johnson, Isaac Hamilton is doing his best imitation of Richard Hamilton, and Bryce Alford possesses the pizzazz and outside shooting of Steve Kerr. While Hamilton and Alford will likely go pro in something other than sports, Leaf and Holiday both have a solid shot at reaching the NBA. Leaf is capable both inside and out on offense, he’s a good passer, and and he plays with a lot of energy on both ends. But with just a 6-11 wingspan he is probably too small to play center beyond college. Still, if there’s any duo in the nation that can replicate and execute the famous baseline baseball throw-in, catch, and turn-around jumper a-la Grant Hill to Laettner, it’s undoubtedly Ball and Leaf.

Holiday could be the big surprise at the next level though. As the first man off the bench, Aaron has been as vital to the team’s success as anyone, with averages of 14.4 points (54.5 FG, 53.3 3Pt, 79.6 FT), 4.1 assists, 3.1 rebounds, 2.0 threes, and 1.4 steals in 26 minutes a night. At 6-1, Aaron wasn’t blessed in the height department to the same extent that his older brothers Justin (6-7 with a 7-0 wingspan) and Jrue (6-4 with a 6-7 wingspan) were, but he was given the same gift of length, sporting a 6-6 wingspan. It’s fair to wonder how much time he spent balling against them given their difference in age, but Aaron does play the game like a younger brother who spent plenty of time getting beat up in the backyard by his bros. Justin and Jrue are well-known for being very calm and cool characters on the court, yet Aaron always plays with an edge, whether it’s talking that trash to Isaiah Briscoe after a beautiful come-from-behnd block or fist-pumping with fury after netting a trey.

Firmly entrenched as a first-round pick in mocks across the web (and rightfully so), Bryant is 6-11 with a 7-5 wingspan, and he has the defensive tools, motor, shooting ability, toughness, and versatility to earn himself a Myles Turner comparison. Whether he will be a draft steal to the same extent as Turner, who went No. 11 back in 2015, remains to be seen. However, I wouldn’t be surprised if Bryant winds up being drafted inside the lottery when all is said and done.

Standing at 6-7 with a wingspan of 7-3, Hayes has the physical advantages that are necessary for thriving at the next level. He is an elite passer who picks apart zone defenses with ease, bullying his opponents with brute strength and Einstein intelligence. Nigel delivered his best individual numbers as a sophomore back when Frank Kaminsky and Sam Dekker helped lead the team to an upset over the then-undefeated Kentucky Wildcats in the Final Four. After struggling pretty badly in his junior season, he is back to playing solid ball through the first 13 games of his senior year. It’s a setup for disappointment, but the Jimmy Butler and Draymond Green comparisons aren’t going to die, especially if the Badgers make another deep run in the NCAA tournament.