New York– The night began with a trade for the New York Mets (58-36), who managed to acquire first baseman Daniel Vogelbach from the Pittsburgh Pirates for reliever Colin Holderman. The idea behind landing Vogelbach was to add punch to a lineup that has struggled to generate runs over the past several weeks. Vogelbach couldn’t get to New York in time for the game, however, and the Mets couldn’t figure out how to hit Yu Darvish (W, 9-4) again as the San Diego Padres (53-42) picked up a 4-1 win in the series opener.

Max Scherzer (L, 6-2) started for the Mets and pitched well early before giving up a leadoff single to Luke Voit in the fourth inning. The next batter was Eric Hosmer, who was the only hitter in the Padres’ order with notable success against Scherzer, and he promptly went the opposite way for a two-run homer (7) to put San Diego in front 2-0. Those would be the only runs Scherzer would allow over six innings of work as he scattered five hits and one walk while striking out eight.

The Padres tacked on in the seventh when Trent Grisham led off the seventh inning with a solo homer (10) off Joely Rodriguez, who was pitching for the first time in two weeks. Rodriguez got into more trouble before being lifted for Seth Lugo, who nearly got an inning-ending 3-2-3 double play before Patrick Mazeika’s throw back to first hit the runner, allowing another run to cross the plate and make it 4-0.

The Mets did finally get a run back in the bottom of the frame on an RBI double from Luis Guillorme but they were dominated by Darvish, who allowed only four hits and walked one in his seven innings of work while striking out nine. Things did appear to get interesting in the ninth inning when Padres’ closer Taylor Rogers put a pair on with one out but he retired Eduardo Escobar and pinch-hitter Mark Canha to secure his 27th save of the season.

More on the Vogelbach trade

Mets’ GM Billy Eppler spoke to reporters prior to the game and indicated that the Mets made an aggressive play to land Vogelbach because they felt the market for hitters was not nearly as robust as the one for relievers. Vogelbach is hitting .228 on the season with 12 home runs and 34 RBIs but he has mashed right-handed pitching, hitting .260 with an .896 OPS against them, making him a good platoon piece to add to the DH mix with team control through the end of the 2024 season.

The addition of Vogelbach likely comes at the expense of Dominic Smith, who landed on the injured list prior to the game with an ankle injury. Smith is batting just .194 and hasn’t homered this season but has been linked to the Boston Red Sox and Chicago Cubs in trade rumors of late.

The other piece of this is the departure of Holderman, an intriguing young reliever who Eppler noted the Mets didn’t want to give up but was the player Pittsburgh was holding out for. Holderman has pitched to a 2.02 ERA on the season and allowed opponents to hit just .186 against him, making this a difficult piece to move, but Eppler noted that the Mets figure to be active in the relief market in the next two weeks to help bolster the bullpen. The pending return of reliever Trevor May could also bolster a unit that is in desperate need of an upgrade.

Today’s Player of the Game award goes to Darvish, who has now allowed just one run on six hits and struck out 15 Mets in 14 innings of work over two starts against them this season.

The Mets recalled RHP Yoan Lopez from AAA Syracuse prior to the game to take Holderman’s place on the active roster.

C Tomas Nido left the game after suffering a contusion on his right hand when he got crossed up on an offering from Scherzer and was plunked in the wrist. X-Rays were negative but Nido is day-to-day.

Scherzer climbed to 15th on the all-time strikeout list, passing Curt Schilling and Bob Gibson during his start tonight.

The Mets will look to even up their series with the Padres tomorrow night. RHP Chris Bassitt (7-6, 3.69 ERA) will take the mound for the Mets while the Padres will counter with LHP Blake Snell (1-5, 5.22 ERA). First pitch is scheduled for 7:10 p.m. 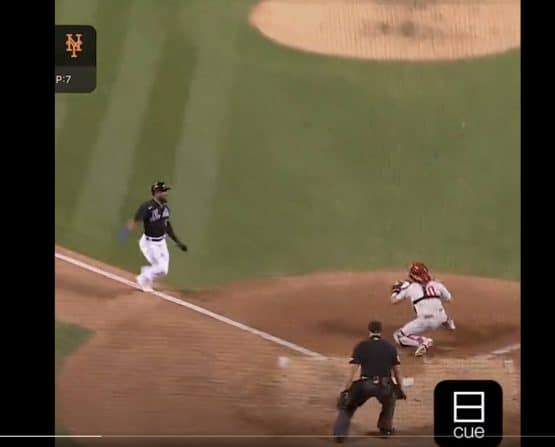 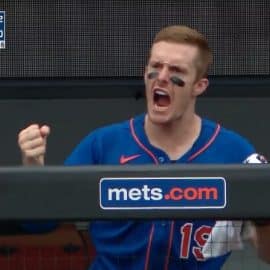