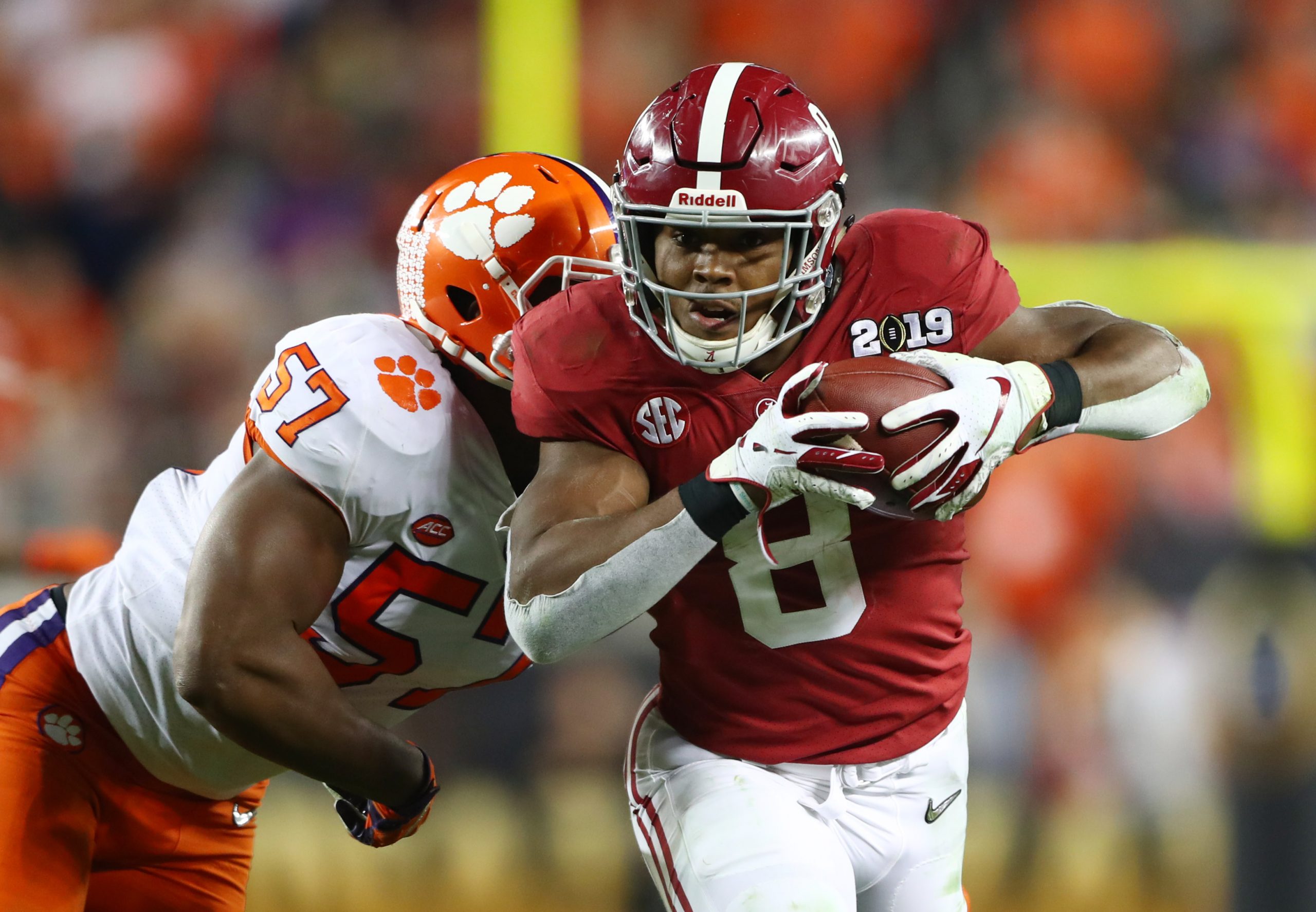 Do you want your team to take an Alabama running back early on this season? Think again. Recent history will tell you that’s a terrible idea.

The Alabama Crimson Tide may be one of the best football programs in the entire NCAA. That’s no secret. We’ve seen them dominate year after year, and win championship after championship. Then, we see their stars get drafted during early rounds in the spring from all different types of positions.

If a team can get their hands on a lineman, defensive back, or even a wide receiver from Alabama within the first few rounds, then they are going to come out of the draft quite happy. However, if an NFL team snags say, a quarterback, or a running back from Bama, then they might not be as fortunate in that case. Specifically for the running back position.

Why is that? Simply because Alabama does not seem to produce NFL-ready running backs. And every year it seems as though some NFL teams don’t come to that realization. Since 2010, Alabama has had seven running backs drafted. Six of which, were taken within the first three rounds. This year, Bama has two guys entering the NFL in Josh Jacobs and Damien Harris. And one of them (Jacobs) is projected to be a first-round selection.

Is drafting an Alabama running back high a good idea?

The hype for Alabama players is warranted. They do great things at the NCAA level, and a lot of them find success in the pros. However, their running backs tend to be replaceable time after time again. A lot of Bama running backs that enter the draft come in with slightly unimpressive stat sheets. And there are pros and cons to that.

The con obviously being that you want to see how well that specific running back can produce when they get a full workload out of the backfield. The pro would be that said running back enters into the NFL without a ton of miles on them. Therefore, making them fresh for the pro’s.

For a while now, many teams have assumed that Alabama running backs will come to their team fresh and ready to produce at a high level, but that really hasn’t been the case lately. Looking at the recent history of highly-touted Alabama running backs, there hasn’t been much success in the NFL, which makes Jacobs and Harris’ a significant risk for drafting them early on.

A look at Bama’s backfield in the NFL

As I mentioned earlier, Alabama has had seven running backs drafted since the 2010 NFL Draft. Six of them were selected within the first three rounds. Four of these guys are currently locked in on a roster, while one of them is testing Free Agency. The rest of them? They are out of the NFL at the moment. Let’s take a brief look at these guys one by one.

Mark Ingram is easily the most successful back of this bunch, and that’s not saying a whole lot. Ingram was the first of two Bama running backs to get drafted in the first round and similar to Josh Jacobs, Ingram is recognized as a power back. It took six seasons for Ingram to finally surpass 1,000 yards in a single season. And even after that, the New Orleans Saints figured they needed to add another star into their backfield with Alvin Kamara.

Fast forward to 2018, and the Saints couldn’t reach a deal with Ingram. He hasn’t been bad over the last few years, but the Saints were never going to break the bank on him. Now, Ingram is with the Baltimore Ravens where he hopes to reinvent himself as a premier back on his own at the age of 29. Ingram is a solid back to have, but he hasn’t lived up to the hype of being a first-round selection, that’s for sure.

Justin Grasso is a Digital Sports Reporter based out of Philadelphia, Pennsylvania. After getting his start in sports media by contributing to sites such as FanSided, Inside the Iggles, Victory Bell Rings, and Heavy.com, Grasso has taken a step from the online blogging world to becoming a credentialed beat writer for South Jersey's 97.3 ESPN and Sports Illustrated, covering the Philadelphia 76ers. In addition to covering the Sixers beat, he also publishes national NBA content for The Sports Daily. Grasso's work has been syndicated on top sports sites such as Bleacher Report, SI, Yahoo Sports, and more. You can follow him via Twitter @JGrasso_. Need to contact Justin? E-Mail: [email protected]daily.com
View All Posts By Justin Grasso