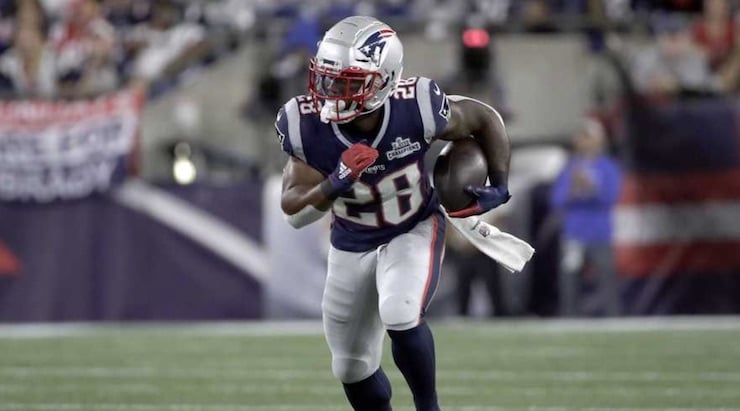 After eight seasons in the NFL, New England Patriots running back James White announced his retirement from pro football on Thursday.

A mainstay in the backfield during his time with the Patriots, White emerged as a fan-favorite in New England. The Super Bowl LI hero retires with 381 receptions for 3,278 yards and 25 regular-season touchdowns. White also had 319 rushing attempts for 1,278 yards and 11 TDs.

New England will be in my heart forever. Thank you for unwavering support over the years. I am forever grateful.

This chapter has been one that I will cherish. I look forward to what is next. pic.twitter.com/8qd0FbA0tW

White retires from the NFL after earning $18.9 million across eight seasons with the Patriots.

He may not be a Hall of Famer, but Patriot fans will always remember him for his performance in Super Bowl LI, versus the Atlanta Falcons.

In arguably the greatest Super Bowl ever, White was instrumental in New England’s 28-3 comeback versus the Falcons.

He finished with 14 catches for 110 yards, six carries for 29 yards, a two point conversion and three touchdowns, including the game-winner score in overtime.

NFL fans took to Twitter to share their favorite moments from the Super Bowl LI hero’s career. While many of White’s best moments came in Super Bowl LI, some fans had a hilarious response to Falcons’ fans seeing the replays over and over again.

Check out the best reactions from NFL Twitter below.

Retiring #Patriots RB James White @SweetFeet_White will forever be remembered – on the field – for this TD! @Patriots @nfl @wbz

James White about to be a Buc lmao

Receiving TDs: James White, 25 (next closest is David Johnson with 17)

In my lifetime the Patriots have had a slew of great third down backs. Kevin Faulk, Danny Woodhead, Shane Vereen, Dion Lewis. But above all of them is James White — Not ONCE lost a fumble and should have been the SB 51 MVP. pic.twitter.com/awvgmcI7bi

“James defines the term consummate professional,” Belichick said. “His dependability, consistency, unselfishness and performance under pressure are elite. Combining great intelligence, quickness and elusiveness, James was a perfect fit for our pass offense. While soft spoken, he brought exceptional leadership and competitive toughness to the team. He was a multi-year team captain and one of the most respected, best team players I have ever coached.”