NHL Betting Picks, Lines & Odds Including Bruins vs Stars and Flames vs Penguins 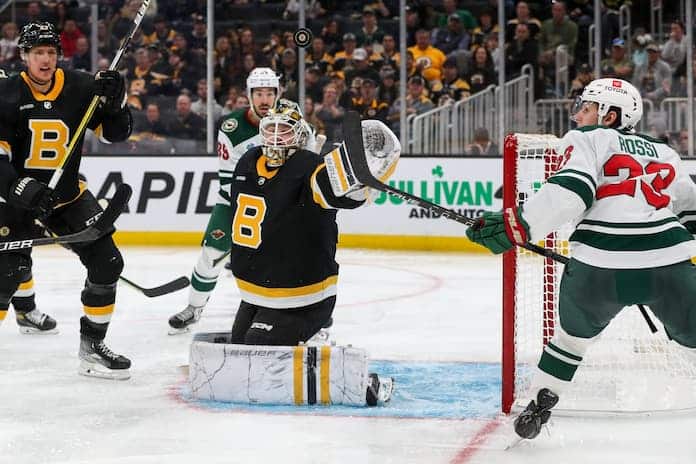 The new 2022/23 NHL season continues tonight into it’s third week with 10 Ice Hockey games to look forward to this evening. Here at The Sports Daily, we are on hand to offer some expert ice hockey picks, as well as the latest odds and betting lines among the current NHL betting markets.

Tuesday night (October 25th) sees 10 huge games in the NHL go down. Ice Hockey fans are in for a real treat as some of the best teams from the NHL are in action on the ice this evening.

The 10 games from the NHL tonight include:

Here is a quick overview of how the betting market looks ahead of tonight’s ten NHL fixtures. We are providing both the best NHL odds alongside some NHL picks for each game:

The Boston Bruins look to extend their unbeaten home run as they welcome the Dallas Stars, who have also made a promising start to the season. New Stars coach, Peter DoBoer, has got the Dallas outfit playing really well, currently sitting in second in the Western Conference. The Bruins sit top of the Eastern Conference, so this match-up is sure to be a tight one between two quality sides.

Despite their fantastic star, the Boston Bruins have been too strong at home for us and the Stars will be the latest team added to their perfect record on their own ice. We see it being a low scoring affair too.

Columbus welcome the Coyotes for an interesting game in the NHL. The Blue Jackets won this fixture 2-0 last season, and come here after a fantastic road win against the New York Rangers. The Arizona outfit haven’t overly impressed so far, and will be up against it on the road tonight for sure.

Both of these teams have got off to a reasonable start to the new NHL season. This will be the second time the two sides are meeting already this season. The Red Wings won 5-2 but the much-improved Devils are looking to even up the score in the upcoming game. The Devils are only averaging 2.80 goals per game, but are only allowing the same amount. Bit of a surprise that the Red Wings are underdogs on their home patch.

The Red Wings offense have really stepped up of late, with their defense only allowing 2.40 goals against too. We favor the Detroit Red Wings to win this one again in a low scoring affair.

Neither of these two sides have enjoyed fruitful starts to the season, with both teams struggling for form a little. The Wild offense has been good, but their defense has been shocking, allowing an average of 5.40 per game. The Canadiens are only allowing 3.00 gaols per game, but their problems come in offense as they aren’t scoring enough goals.

We think that as the betting underdog this time, the Canadiens could have too much for the Wild, as long as their shooting improves. The Wild’s defense is very poor, and will concede too many goals tonight.

Two potential contenders for the Stanley Cup come the end of the season go head to head this evening in New York. In the last 10 meetings, the Avalanche own a 6-3-1 advantage over the NY Rangers and have won the last three meetings. The moneyline here is completely split and it is clear to see why.

We can see the under points total being the play here, and can see the Rangers bouncing back from disappointing defeat against the Blue Jackets by putting o a good performance on their home patch and claiming the W in a tight affair.

Both of these teams are in great form right now. The Florida Panthers are 4-1-1 and are right up at the top of the Eastern Conference, meanwhile Chicago have won three on the spin and sit in sixth in the Western Conference. The Panthers are looking the complete package this season. Their offense has been impressive, averaging 3.17 goals per game. In defense, they are allowing only 2.83 goals, so it is clear to see why they are one of the teams to beat so far.

The Blackhawks are scoring 3.20 GPG and allowing 3.00. This will be a tight one and we could see there being a few goals in this one too! We are slightly favoring the Blackhawks +1.5 in his.

This is a fantastic match-up. These two sides are most definitely two of the best teams in the entire NHL with the Flames boasting a 4-1-1 record and the Penguins currently sitting 4-1. The Penguins offense and defense has been super impressive. Going forward, they are averaging 5.20 GPG and only conceding an average of 2.20 goals per game. The Flames aren’t as free scoring as Pittsburgh, but still have great statistics. Calgary are scoring an average of 3.60 GPG and allowing just 3.20 goals per game too.

The Flames are the slight favorites here, and seeing as they are on their home turf it is clear to see why. However, here at The Sports Daily we can see a road win for the high flying Penguins in this one.

The Seattle Kraken have enjoyed a decent start to the season (2-3-2), but have lost four of their last five matche. The Sabres on the other hand have won four out of their last five, including three of these on the road. Last season, the Kraken swept the Sabres, winning 5-2 as -200 home favorites and 7-4 as -135 road favorites.

Although the Sabres couldn’t quite defeat the Kraken last season, we think they could do it this time around. They have looked highly impressive this season and have looked sensational on the road too. There could be a lot of goals here tonight in Seattle too.

Both of these sides are 3-2 in their last five matches, both sitting on six points respectively in the Eastern Conferences. The Kings have only played at home twice this season, losing both. They have picked up all of their points on the road, so will be hoping to fix this problem tonight on their home ice. The Lightning have been decent on the road, again picking the majority of their points up away from home.

This could be a cagey affair between two average sides. We are split on who to take in this one, so are going to favor the LA Kings purely because they are on their home patch.

The last of the 10 Tuesday night NHL meetings sees the Sharks host the Golden Knights to the SAP Center. The Vegas Golden Knights have looked the far better of these two tides, and will certainly be there or there abouts come the end of the season in contention for the Stanley Cup. The San Jose Shanks have hit a bit of form after a shaky start, winning two of their last three ice hockey fixtures.

The Golden Knights are heavy favorites here, and it is clear why. Vegas is 9-0-1 in its last 10 games against San Jose, and we can see them picking up another win to claim their fifth win in seven NHL games.