NHL Betting Picks, Lines & Odds Including Islanders vs Rangers and Oilers vs Blues 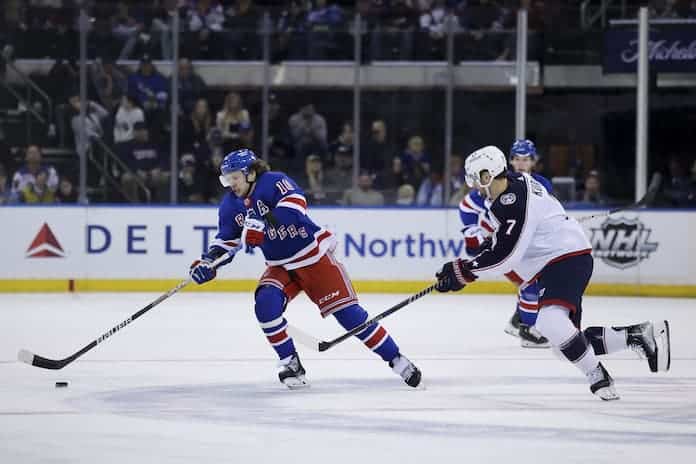 The new 2022/23 NHL season continues tonight into it’s third week with just the three Ice Hockey games to look forward to this Wednesday evening. Here at The Sports Daily, we are on hand to offer some expert ice hockey picks, as well as the latest odds and betting lines among the current NHL betting markets.

Wednesday night (October 26th) sees three competitive games go down in the NHL. Ice Hockey fans are in for a real treat as some of the best teams from the NHL are in action on the ice this evening.

The three games from the NHL tonight include:

Here is a quick overview of how the betting market looks ahead of tonight’s three NHL fixtures. We are providing both the best NHL odds alongside some NHL picks for each game:

The battle of New York and bragging rights of the Big Apple. The Islanders welcome the Rangers to UBS Arena and the bookmakers cannot split the two teams on the moneyline. Both of these sides have lost their last three games, with the Islanders 2-4 and bottom of the Eastern Conference, and the Rangers sitting in 12th currently 3-4. The Islanders have won three of the last five meetings between the pair, most recently in pre-season.

We have to edge this one in favor of the home side, and think it could be a super tight affair between two struggling teams. Take the NY Islanders and the under lines.

Two teams who both sit on six points in the NHL Western Conference. It’s the St. Louis Blues who have enjoyed the more fruitful start, winning three games from four. The Edmonton Oilers are 3-3 but have hit form in the past week or so. The Blues beat the Oilers just five days ago on the road, and now they are at home you have to fancy them to make it 2/2 over the Edmonton outfit.

Here at The Sports Daily, we can see this being a low scoring affair. The Oilers defense has been leaky, but the Blues aren’t the most prolific going forward either. Blues by two and under 6.5 total points is our picks for this tasty NHL match-up.

It’s safe to say both of these sides are struggling right now in the NHL. The Anaheim Ducks are 1-5 and have lost five games on the trot. The Tampa Bay Lightning has a poor start, but have won two of their last three NHL games, somewhat making their start to the season slightly more promising. The Lightning have had the better of this fixture in recent years, winning six of the last nine meetings between the pair and four of the last five.

The Lightning had two impressive wins back-to-back against the Panthers and Islanders, beating the Florida side on their own patch. If they can replicate that kind of form, they should have too much for the Ducks and should beat them easily enough in our eyes. High scoring match could be on the cards here too with two poor defenses on show.