NHL should have turned All-Star Game into an Olympic Screwjob 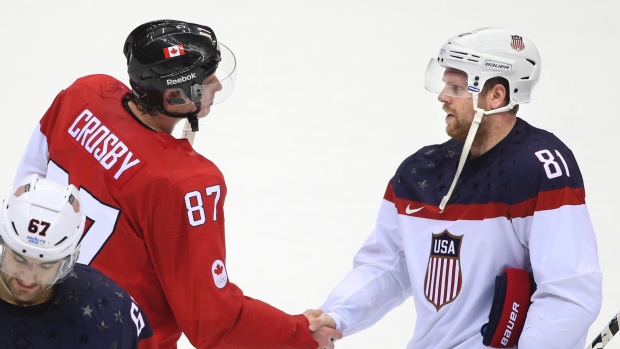 The NHL All-Stars put on a good show this afternoon. The 3-on-3 tripleheader saw the Pacific Eleven, dressed in mod white space suits, win the overall game with twin 5-2 victories over the Central in the first period and the Atlantic in the third. Kris Letang and Sidney Crosby both scored but the Metropolitan lost 7-4 to the Atlantic in the second period. Crosby recorded a game-high six shots on goal.

How pathetic is it to look up stats from an NHL All-Star Game to find out if Crosby had the most shots?

Pretty pathetic, but still better than being in the darkest place in life, where you uncontrollably wager large sums of money on the Pro Bowl. Think of some guy who put $5,000 on the NFC only to punch a hole in the wall of his basement before lighting himself on fire when the AFC came back to win.

Today is the day we separate the casual gamblers from the people with a serious problem. If you bet on the #ProBowl you need to seek help. #Caring

Seriously. The first thing an addiction counselor should tell these people is that tonight – even tonight – there are better entertainment choices on TV that don’t require losing cash money.

The Grammys. Royal Rumble. Re-examine your life choices and do not. bet. on. the. Pro Bowl.

The NHL does many things wrong (inconsistent goaltender interference rulings) but at least they have tried to liven up the All-Star Game by repeatedly changing its format over the years. Originally, it was Defending Champs vs. Everyone Else. Then Conference vs. Conference. Then North America vs. Europe. Then the playground-style two captains, alternate draft picks. Without question, 3-on-3 OT is the best part of hockey right now and turning the All-Star Game’s current format into three 3-on-3 mini-games was a smart move.

But 2017-18 will go down in history as the season when hockey fans got screwed out of watching many of the NHL’s All-Stars play for their countries at the Winter Olympics.

Speaking of screw-overs, the Royal Rumble and wrestling, the infamous “Montreal Screwjob” refers to the night over 20 years ago when iconic Canadian wrestler Bret Hart was back-stabbed by WWE owner Vince McMahon, who secretly arranged for Shawn Michaels – the original HBK – to win the World Heavyweight championship match. The Screwjob nearly ignited a traditional Montreal riot and left many inside and outside the wrestling community embittered for years.

Similarly, the NHL had a golden opportunity this weekend to back-stab the detestable International Olympic Committee (IOC) by staging a Tampa Bay Screwjob, i.e. using the All-Star Game as a troll vehicle. Yes, several dingus short-sighted NHL club owners must shoulder some of the blame for shutting out NHL players from the Winter Olympics. They loudly complain every four years about the interruption to ticket sales and fan interest or the risk of injury to their stars.

But the overwhelmingly greater factor is that the out-of-touch IOC decided that 2018 financing would be different. Unlike the five previous “NHL” Winter Olympics, the IOC refused to pay for NHL players’ insurance and travel expenses (approximately $25-million in 2014 with the IOC contributing $14-million) while continuing to rake in billions from bribes, shady kickbacks, TV rights fees, ticket sales, licensing and merchandise. And remember, players receive no salary, not one penny from the IOC, when they play in the Olympics.

Yes, NHL All-Stars rake in millions in income, but it’s the principle. If you were invited to a supposedly prestigious global conference in your line of work where there was a significant risk of injury and you are told that you have to buy your own insurance, your own plane ticket, your own hotel room and you would be working for free for two weeks, would you do it?

Therefore, if the IOC insists on telling fans that Chris Bourque, Derek Roy and Rob Klinkhammer will uphold the tradition of high-caliber Olympic hockey this year, then screw the IOC.

The NHL should have staged their own true Winter Olympics in Tampa Bay this weekend with All-Stars that should have populated those Olympic teams.

Select one (1) team captain from each of the six major hockey nations. Correct choices in parentheses. The team that had the third-best goal differential in their regulation time matchup is the “Bronze” winner.

No shootouts: Since shootouts are random and a horrible way to settle a championship, ties at the end of OT will be broken by as many additional OT periods as is needed. Fight for your country. Fight to the death.

During each of the three 15-minute post-period breaks, the Amalie Arena center ice video board would show investigative news reports of all the appalling, brazen corruption the IOC has committed, and continues to commit around the world.