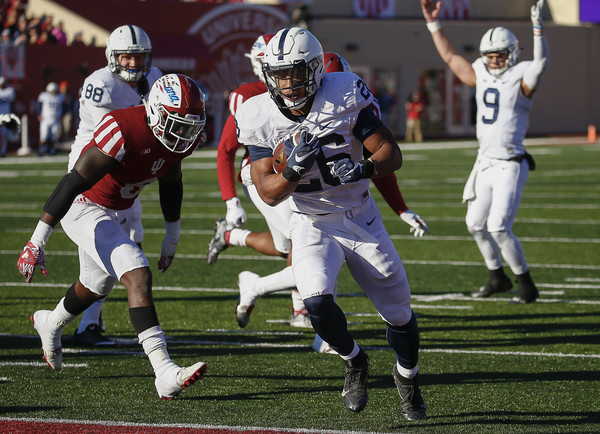 It’s a good thing Penn State is a second-half team, because they needed it in a big way to avoid an upset at Indiana.

Indiana has a long-standing history of making things dicey for Penn State. Despite the lopsided nature of the head-to-head series, a game against Indiana rarely goes without some tense moments when Penn State take son the Hoosiers. That was once again the case on Saturday with an early kickoff in Bloomington. Much like Penn State’s last trip to the state of Indiana two weeks ago, things got off to a sloppy start before Penn State could kick things in gear and manage to get out of the state with a win. Unlike the Purdue game, Penn State would be on the ropes well into the fourth quarter.

Penn State opened the game with a nice looking offensive series resulting in a touchdown, but soon enough Penn State would run into a bad case of the injury bug. Left tackle Paris Palmer left the game early with a leg injury. Connor McGovern also got banged up in the game. With the offensive line crumbling, the running game was quickly taken away by a feisty Indiana defense. Indiana has struggled against the run all season, but they clamped down on Saquon Barkley for much of the game. Joe Moorhead’s refusal to abandon his running game was also maddening at times, but the offensive coordinator would have a few tricks up his sleeve for later once he sucked Indiana’s defense into a false sense of security. With the running game struggling, Indiana also put pressure on Trace McSorley, who was off the mark fairly often and his receivers were unable to make some big plays.

Well, until the second half, that is.

Penn State was just hulking up in the third quarter. pic.twitter.com/Y2gVIwicV7

Down 24-14 late in the third quarter, Penn State was looking ripe for an upset on the road. With the way the offensive line was playing and some questionable decisions to stick to running the ball despite the lack of success, it was fair to wonder if this was the end of the road for Penn State’s wild run. But four plays after digging an otherwise demoralizing 10-point deficit, Penn State answered with a four-play, 70-yard touchdown drive. McSorley connected on passes of 43 yards to Saeed Blacknall and 21-yards for a score to Chris Godwin to generate a much-needed spark. The quick touchdown brought Penn State to within three points late in the third quarter, setting the stage for a wild fourth quarter.

Penn State trailed by three and seemed to have some momentum going in their favor, but it still could have benefitted from a big play. Fooling Indiana all afternoon proved to be difficult, which made the call for the flea flicker on 2nd and 5 early in the fourth quarter all the more brilliant. The execution needed to be spot on, and it most certainly was. Observe…

Saquon Barkley had been gobbled up pretty much all game, so the sight of another run straight up the middle was briefly frustrating to see in this situation, but the clean flip back to McSorley and the pass down the middle to DaeSean Hamilton for a 54-yard gain worked out as well as any play did for Penn State. Penn State would score a go-ahead touchdown two plays later with Barkley doing the honors. Penn State’s defense was unable to prevent the Hoosiers from answering with a touchdown of their own on the ensuing drive, but the flea flicker kept the offense alive and confident in crunch time.

Putting the Finishing Touches on a Win

Penn State has outscored its opponents in the fourth quarter 76-14 in the last five games.

Three times during this run, Penn State has had to come from behind in the fourth quarter to get a win. This is a strong sign for the program going forward as it continues to learn how to win. It doesn’t always have to be pretty, as long as you celebrate a win after the clock hits zero. Penn State has found ways to win using offense, defense and special teams.

Penn State will be on the road once more next week when they take on Rutgers. Rutgers will be coming off a 49-0 defeat at Michigan State and the Scarlet Knights will continue to search for their first BigTen win of the season. At 2-8, the Penn State game will pretty much be Rutgers’ Super Bowl as they wrap up their home schedule for the year.

Penn State has won each of the two meetings between the schools since Rutgers joined the Big Ten.