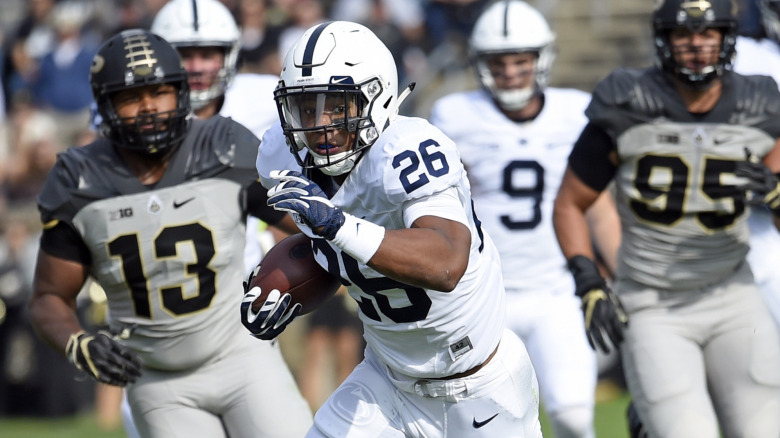 After an expected sluggish start, Saquon Barkley and Penn State lit up Purdue in the second half

After winning a wild game last weekend against the Buckeyes, it was pretty much expected Penn State would do one of two things against Purdue. Either they would steam roll the Boilermakers on the road or win an ugly game. It turns out they did both.

Penn State struck early with Saquon Barkley scoring a touchdown on the game’s opening drive, but Purdue would counter everything Penn State did in the first half. Penn State was forced to a pair of three-and-outs in the first half, with each of those drives traveling in the opposite direction. Tied at 17-17 at halftime, it sure looked like we had an ugly game on our hands. The second half would be quite a different story, serving up the blowout to satisfy the other likely outcome of the game presented earlier.

Penn State’s defense, which had been sluggish in the first half, came up with a big play on Purdue’s opening drive of the second half. Brandon Smith picked off Purdue quarterback David Blough and returned it 22 yards to set Penn State’s offense from the Purdue 24-yard line. The spark was ignited, and Barkley got to work with back-to-back nine-yard gains, followed by a five-yard run to the one -yard line. Trace McSorley then connected with Chris Godwin for a go-ahead score, and Penn State never looked back.

Penn State’s special teams came up with a fumble recovery on a muffed punt return by Purdue the next time Penn State had the ball. This once again setPenn State’s offense at the Purdue 24-yard line, and Barkley once again ripped off a big run (20 yards) before Andre Robinson finished it off with a four-yard touchdown run. Penn State scored on each of their second-half possessions (if you count a muffed punt recovery as part of the same offensive possession). The offense was sizzling as it scored most points in a road conference game since joining the Big Ten in 1993.

ICYMI: @saquonb21 takes the handoff, and, well, you know what happens next.

Barkley had himself a career day, rushing for a career-high 207 yards and scoring two touchdowns. It is the second time this season Barkley has ripped off 200 rushing yards this season. He rushed for 202 yards against Maryland two weeks ago. In the last three weeks, Barkley has rushed for 508 yards. Against Purdue, Penn State also got Barkley involved in the passing game, with the running back accounting for a game-high 70 receiving yards. Not that Barkley was an unknown commodity in college football, but his performance did not go unnoticed.

Saquon Barkley: Has 2 of the 3 200+ rush yd games in Big Ten play this season. Tied for 2nd-most in FBS. Donnel Pumphrey leads FBS with 4

Might be time to start including Saquon Barkley on some Heisman lists. Second 200+ yard game of the year against Purdue.

SAQUON BARKLEY RUSHED FOR 207 YARDS AND 2 TOUCHDOWNS AND HAD 70 RECEIVING YARDS! pic.twitter.com/WNtzvyk4nZ

This is in no way suggesting Barkley is the new Heisman favorite (not when Lamar Jackson delivered a Heisman moment in a win against Virginia and Jabrill Peppers was doing a little bit of everything against Michigan State and Dalvin Cook did all he could against Clemson, just to name a few), but a recognition that Barkley’s efforts are not being overlooked.

Penn State took advantage of Purdue’s four turnovers, just as we discussed might be the case earlier in the week, by picking up 28 points for maximum damage. The took Penn State from a -3 turnover margin and -18 points-off-turnover margin to a +1 and +10, respectively. That is quite a swing, but is a solid testament to the work done by the defense to create opportunities and the offense to cash in on those extra opportunities (even if it was against Purdue).

Penn State entered the week ranked 24th in the Associated Press poll and unranked in the coaches poll. Penn State will easily be ranked in both polls this week, and they might very well sniff a top 20 ranking. Teams ranked ahead of Penn State that lost this week include (AP rankings noted):

Tennessee and Navy will likely fall out of the rankings this weekend. That gives Penn State at least two spots to move up in the rankings as a result. It will be interesting to see how far Boise State will drop, but there is a chance Penn State could slip past the Broncos as well. Utah lost a hard-fought game against one of the best teams in the country, so it is not liekly the Utes take a big drop, but keep it in mind. Florida State might be a reach too, although they have now lost three games (two against Clemson and Louisville though).

Penn State in the top 20 feels very reasonable given how things are unfolding right now.

Penn State welcomes Iowa in for a primetime matchup on Big Ten Network next Saturday. The Nittany Lions will look for a second straight victory under the lights in Beaver Stadium, and James Franklin is already encouraging the fans to show up dressed for the occasion.

We need Beaver Stadium sold out & rocking next wk against Iowa! TOGETHER we are tough to beat! Who says we can only have 1 whiteout a yr!

We NEED 107,000 fans going crazy next week, most difficult environment in ALL of college football!#TogetherWeAreHardToBeat