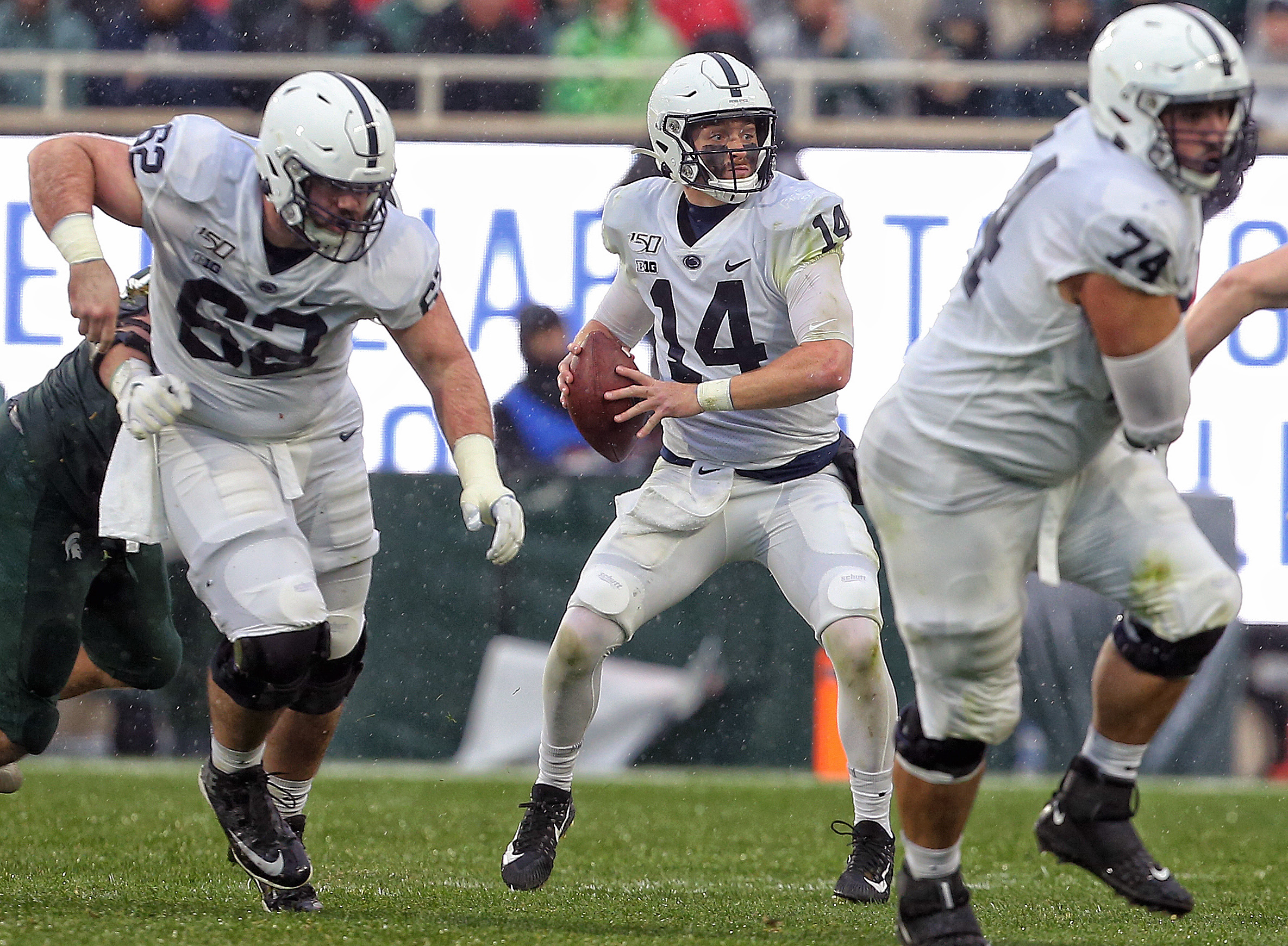 After a grueling win at home last week against Michigan, Penn State was tasked with going on the road for what could have been another physical matchup against a team that has had their number in recent years. Sean Clifford and tight end Pat Freiermuth connected for three touchdowns and the defense clamped down at Michigan State to send the Nittany Lions home with a 28-7 victory, and a Land Grant Trophy to show for it.

With a 7-0 lead thanks to the first of three touchdown connections in the first quarter, Penn State extended its lea don the Spartans with Freiermuth going beast mode as he pushed forward for a touchdown after catching a pass form Clifford over the middle.

Penn State missed the extra point, but a 13-0 lead would be extended later in the second quarter. KJ Hamler, who was named the Big Ten Offensive Player of the Week last week, managed to find open space in the middle of the field as the Spartans seemed to lose track of the speedy receiver. Once Clifford got him the ball, all Hamler had to do was find his angle and race to the end zone. Penn State would go for two, for some reason, and grabbed their 21-0 lead.

Michigan State continued to hang around, but a muffed punt deep inside the red zone gave Penn State a chance to strike after their drive had seemingly stalled. Cue up Clifford to his big tight end once again…

It was another performance where Clifford didn’t exactly light up the box score with his passing yardage or completion percentage (18 of 32 for 189 yards), but he did throw four touchdowns. His only interception was the result of a bad decision to lob the ball up for grabs that will give the coaching staff something to address as the sophomore continues to grow. The bottom line is Clifford was ready to strike when he needed to the most. And after manning the offense to an 8-0 record that is now highlighted by a 3-0 stretch against Iowa, Michigan, and Michigan State, the confidence heading into November continues to be rising in Clifford as the starting quarterback.

The running back by committee continued in rainy East Lansing, with Journey Brown getting the heaviest workload. Brown carried the football 12 times for 45 yards, with Devyn Ford, Noah Cain and Ricky Slade all getting touches as well. Michigan State didn’t make running the ball easy. Cain’s second week seeing his production and workload relatively diminished led to questions about his status. After the game, James Franklin suggested he is a little banged up but nothing to the extent that will prevent him (as well as other players in similar situations) form missing any significant playing time. And with a bye week coming up, now is a great time to get rested.

Before Penn State managed to take care of business on the road against the Spartans, No. 5 Oklahoma was upset on the road by unranked Kansas State. With the top four teams in the country (Alabama, LSU, Ohio State, Clemson) all winning, brace yourself for Penn State moving into the top 5 in the major polls on Sunday.

Helping out Penn State’s strength of schedule argument was the two most recent opponents each winning on Saturday. Iowa should remain in the top 20 after shutting out Northwestern in Evanston (Iowa entered the week No. 20 in the AP poll). And No. 19 Michigan scored the most stunning win of the night with a 45-14 thumping of No. 8 Notre Dame.

Going a bit deeper, future Penn State opponent Indiana clinched their bowl eligibility with a win at Nebraska. At 6-2, the Hoosiers get Northwestern next on their schedule and then head into a bye week before visiting Penn State in mid-November. If the Hoosiers aren’t ranked on Sunday, they absolutely should be by the time they make their trip to Beaver Stadium.

All in all, that was a pretty solid day for Penn State.

Now the stage is set for quite a fun matchup. After getting a bye week this coming week, Penn State hits the road for a game against No. 17 Minnesota. The Gophers are off to their own 8-0 record for the first time since 1941, and already stumping for a visit from ESPN College GameDay for their matchup with unbeaten Penn State.

To Whom It May Concern pic.twitter.com/qNGRI6X9ZA

Minnesota will also get a bye week to prepare for the game, and this one could be much tougher than originally anticipated.

And, just like Penn State should be moving up in the polls, Minnesota should be doing the same. With No. 15 Texas losing to TCU and Notre Dame losing for a second time (not to mention as badly as they did), the Gophers should be moving up at least two spots in the next polls.

Next week on Locked on Nittany Lions

Penn State may be on a bye week, but there are no bye weeks for the Locked On Nittany Lions Podcast. Coming up on Monday, we’ll recap this win against the Spartans and take a look around the rest of the Big Ten. We’ll also open up the mailbag if you submit any questions. We’ll still have a Big Ten preview episode to look forward to and we’ll mix in some more bye week topics of conversation.