Lefties Need Not Apply: With Brebbia Over Webb, Righties Will Help Cover the Splits

Late last week, the Cardinals announced the designation for assignment of LHP Chasen Shreve. At that point, it was expressed that the final roster spot would come down to RH John Brebbia and LH Tyler Webb.

At that point I decided that I would be working up a post discussing why I believe the best move was to stick with Brebbia and leave Andrew Miller as the bullpen’s (and team’s) lone LHP.

Then on Sunday it was announced that the Cardinals would be taking Brebbia to Milwaukee to start the year, foregoing the traditional 2 LH format in the bullpen.

So rather than argue why they should do it this way, I simply get to explain why it was the correct decision.

First of all, Brebbia should have never been on the bubble

Last spring, Brebbia had one of, if not the most impressive camp of all relievers. However, in between Montreal and Queens, the Cardinals decided to bring Jordan Hicks into the fold immediately. The decision came down to Brebbia and Mike Mayers — who was Brebbia’s direct challenger for best spring honors — and Brebbia became the victim of the roster crunch. He bounced between St. Louis and Memphis several times over the course of 2018. Through it all, he posted a 3.20 ERA, 3.02 FIP, and struck out 28.7% of batters (for a bullpen that struggled with K’s) while walking 7.7%, 5th best on the team among guys with 24 IP.

While throwing more relief innings than any Cardinal the last 2 seasons, he has the 3rd best ERA, lowest OBP against, 3rd lowest wOBA against, the 4th highest K%, and the 2nd lowest BB%. He has been their best overall reliever over the last 2 years, let alone one of the most beloved teammates in the clubhouse.

He didn’t deserve to ride the “Memphis shuttle” in 2018. It would have been criminal for him to be optioned to Memphis to start 2019.

However, roster issues like contracts and options play a role. With Gant and Mayers out of options and Dominic Leone set to make more than double Brebbia’s salary — whether in St. Louis or in Memphis — John found himself unfairly on the bubble yet again. This time, it worked out in his favor.

I’m glad they made the right call.

And now the reasons why not carrying 2 lefties is fine…

It isn’t just about Brebbia. Yes, he was the guy that would have been pushed out, but it’s the rest of the cast that helped turn this decision in his favor. As I said, the Cardinals are electing to with just 1 LH reliever and 6 RH. Now, I’m not going to tell you that the Cardinals RH relievers are equivalent to a good, true LH in terms of retiring LH hitters. But I will say is, given the options on hand for the Cardinals, they are better off with their RH’s than they would have been with one of the LH’s, relatively speaking.

Let me visualize this. The following charts show recent performance (in most cases 2017-18) vs. LHH in the categories of On-Base Percentage, Slugging Percentage, Weighted On-Base Average, and Strikeout Percentage. The pool of players includes the announced Opening Day bullpen, plus the 4 LHP’s that did not make the club.

Here’s how they rank in each: 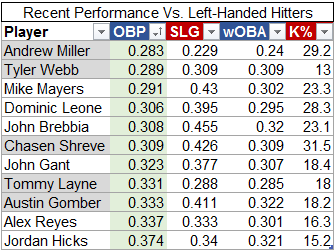 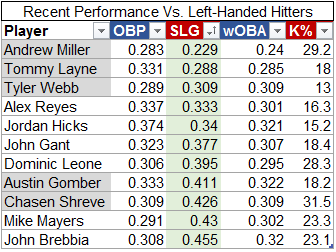 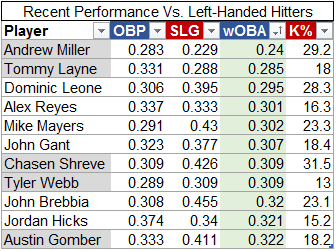 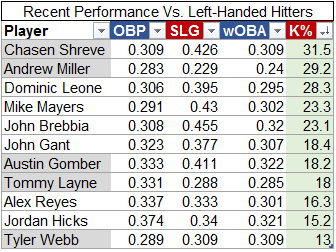 What we can clearly see is that Miller dominates this list, as he should.

My focus is on the 4 RH’s not named Hicks or Reyes, because their performances reduce the need for carrying a 2nd lefty, or at least one from the given options.

Leone does the same as Gant, with his exception being SLG.

Mayer’s tops at least 3 LH’s in 3 categories, with SLG being the only category that he did not outperform one.

When we consider that Shreve’s 31.5 K% is kind of a mirage and that he struck out just 18.4% of LHH with the Cardinals, all 4 of these RH’s are better at striking out LHH than the options given for the 2nd LH relief spot.

An argument can be made for Webb, who doesn’t allow a high OBP or SLG. But he also doesn’t provide the neutralizing strikeout punch. He has options, so he can ride the shuttle this season, as needed.

Veteran Tommy Layne doesn’t allow slugging and has a low wOBA against him, but his status on the outside of the 40-man roster is a major obstacle. He is also more of a traditional specialist-type.

One last way to view this is to organize it by the pitchers average rank across the categories, in order to give a more generalized, overall picture of relative success against LHH. That ends up as such:

Here is where Dominic Leone really stands out, being the best non-Miller in the group vs. LHH. Because Layne isn’t on the 40-man, he can be excluded for practical purposes. That leaves Leone and Mayers both standing as more effective, overall, vs. LHH than any of the other options that were on the roster this spring. Again, I’m not saying they dominate lefties and will replicate the performance of a specialist, but they are better than the alternatives.

We saw how the decisions played out. When it came down to the competitors for the 2nd Lefty spot, Webb was ahead of Gomber (optioned) and Shreve (DFA).

But when it got reduced Webb vs. Brebbia, they sided with the best overall pitcher in Brebbia. I my eyes, the splits for Leone and Mayers helped sway this decision in John’s favor. Their success made keeping a 2nd lefty — especially when you consider the options — a non-necessity.

These two plus Miller will adequately cover the Cardinals against LH bats, and the inclusion of Brebbia gives the Cardinals the best possible bullpen, overall, that they could have coming out of spring training. And we didn’t even talk about how stupid good this bullpen will be against RH hitters.

Siding with talent is always the best idea, but with bullpens it isn’t always the easiest or most practical decision.

But thankfully, the Cardinals were able to get this one right.