No Quit, but Same Result 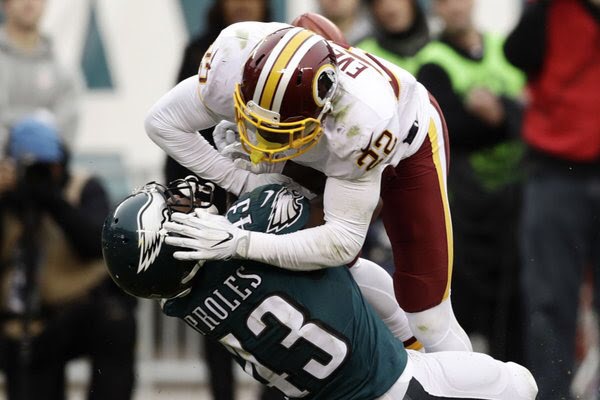 Philadelphia – Eagles came out with an impressive first drive that saw the Birds gain the early lead after a Caleb Sturgis 45 yard field goal. The defense then forced an early three and out that gave the Eagles the ball at their own 20 yard line. Wentz took a shot deep to Nelson Agholor who was interfered with and that ended being a 44 yard gain. Five plays later Wentz found Jordan Matthews for what looked like a touchdown, but was ruled incomplete with only one foot being in bounds. The following play Wentz made his lone bad decision of the day while throwing off his back foot to Zach Ertz in the end zone that was ultimately intercepted by Deshazor Everett. A note to mention is that was the first turnover Wentz has converted in the red zone. Robert Kelley broke a run for a 22 yard score giving the Skins the lead 7-6. Wentz responded with his throw to Darren Sproles for a four yard touchdown. DeSean Jackson then burnt Leodis McKelvin for a 80 yard touchdown giving the Redskins the lead once again this time at 14-13. The following Redskins drive saw the same result except this time to Pierre Garçon for a 15 yarder. Redskins quarterback, Kirk Cousins, was then intercepted by Leodis McKelvin and he returned it for an Eagles touchdown. Caleb Sturgis gave the Eagles the lead the following drive with a field goal to make the score 22-21. Lastly, the Redskins put the game away with an eight play drive which resulted in a 25 yard touchdown run by Chris Thompson making the score 27-22 dropping the Eagles to now 5-8 and eliminating nearly any chance at making the playoffs.
Wentz ended the day with 319 total yards and one touchdown. Ryan Mathews made his return after sitting out the last two weeks. Mathews finished the day with 60 yards on 15 touches. Zach Ertz and Trey Burton combined for 17 receptions to go along with 177 total yards on 26 total targets. Trey Burton is slowly becoming a reliable target for Carson Wentz and it seems as if they have the chemistry to become a nice hook up in the future. Jordan Matthews was another bright spot even while playing through injury it seemed with the limp he was running with. That didn’t stop Matthews from doing damage as he finished with eight receptions for 79 yards.

What’s the Problem?
There are a lot of holes on this team but the first is defensive back, preferably cornerback. Nolan Carroll and Leodis McKelvin are the two starting cornerbacks on the team. Pro Football Focus has Nolan Carroll’s overall grade this year at 45.8/100 making him the 105th overall cornerback in the league. Look for the Eagles to target a cornerback in this year’s draft and expected it to come soon. The top choice, where the Eagles will likely be drafting from is Sidney Jones from the University of Washington. Jones has the ball skills, elusive hips and overall good speed to become a shutdown corner in this league. Jones also is not afraid to lay a hit on you so don’t sleep on his tackling ability.


Who Deserves More of the Blame; Doug Pederson or Jim Schwartz?
The Eagles defense started off on fire, but that’s not the case over the last four games in which the Eagles have fell apart. Either not getting off the field on third down, giving up the big play, or just being an undisciplined football team. I put the blame on Jim Schwartz. Many don’t remember, but Jim Schwartz was hired before Doug Pederson was even in the door and Schwartz had some say in personnel of the team considering the team signed; Leodis McKelvin, Ron Brooks, Nigel Bradham, and Stephen Tulloch all who played under Jim Schwartz. The team has also given up 27 points to Washington, 32 points to the Bengals, 27 points to the Packers, and 26 points to the Seahawks in the last four games which is inexcusable when you think about how much talent is on the defensive side of the ball.
What is most disappointing is the Eagles ran more offensive plays ran, won the time of possession, and had more passing yards on Sunday, but still came out with the loss. The big plays on defense seem to be holding this team back yet again. The defensive line entering the year was considered “elite” with guys like; Fletcher Cox, Brandon Graham, Bennie Logan, Vinny Curry and Connor Barwin. In the last four games the Eagles have had just three sacks and one was a loss of no yards by Vinny Curry. Jim Schwartz’s, “wide-nine” scheme just isn’t getting the job done. He needs to change things up weather that is moving Fletcher Cox to defensive end at times just to get a different look. Yes, the offense has had their fair share of struggles, but I think it’s time we look at what this defense has done lead by Jim Schwartz.