The October Momentum did not carry the Coyotes into November.

The Coyotes often looked like two different teams during November. Some losses they looked awful, and as if they were still napping. Or maybe still stuffed from their Thanksgiving feasts (think Detroit, Colorado games). While in others they fought hard and couldn’t get a chance. They were out of puck luck (think Vegas and the game in Philadelphia).

The losses were they put up a fight never seem to hurt quite as much. It’s much easier to watch a loss when the teams look like they are playing hard and putting in the effort. Seeing teams be competitive is much more fun than when a game looks very one-sided.

After the 6-1 loss to the Flames, the Coyotes decided to shake things up. They sent Perlini and Strome to Chicago in exchange for Nick Schmaltz (a Wisconsin native). He’s played in the past with several young Coyotes players. It appears the shakeup seemed to give the Coyotes a much-needed boost. They beat Minnesota 4-3 and then headed to Nashville for a shutout win!

The Coyotes finished November 5-6-2 and are 11-11-2 for the season. It could always be worth and at least we aren’t last (or battling for last).

Here’s to a better December! 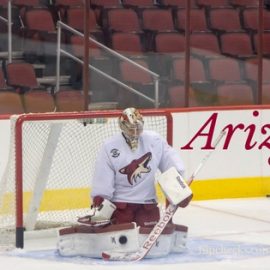 Summers here, are you ready?