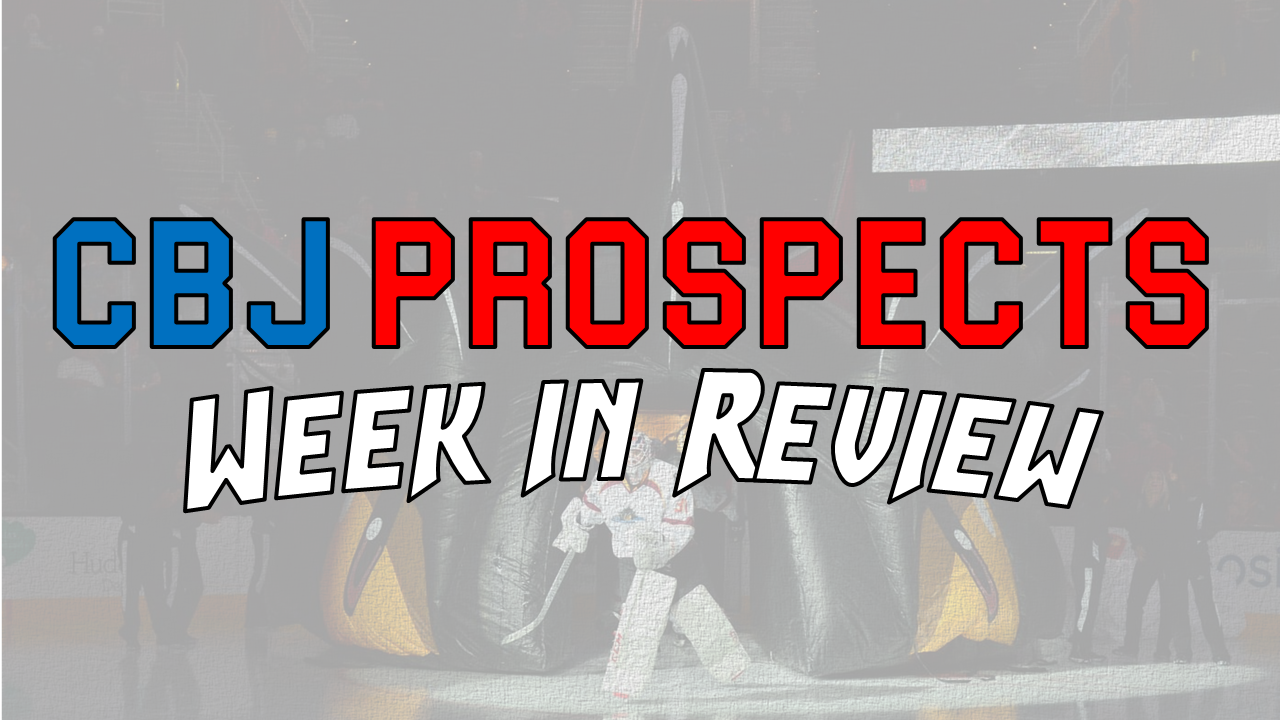 For the first time this season, our recap begins in Cleveland. The Monsters opened the year with a back-to-back against the opponent they had in the first round of last year’s Calder Cup run, Rockford. The Monsters did as usual for Champions, they held a banner raising ceremony along with the player introductions. And then they got to work on the ice.

After a scoreless first, the Monsters went on the power play. Sonny Milano passed to Jamie Sifers who gave the puck back to Sonny. Milano skated in and fired from the circle to score his first of the season through a Paul Bittner screen. Sonny was quite dangerous overall in the first, he just missed on two breakaways. The game went into the third with the Monsters leading 1-0 and that changed very quickly when TJ Tynan entered the zone with speed and spun a pass to Alex Broadhurst. His shot was stopped but Aaron Palushaj picked up the puck and passed it back to Tynan who shot before Broadhurst tap it in to make it 2-0. Anton Forsberg lost the shutout with just 2:24 remaining. He made 24 saves overall. Here are Paul Bittner, Anton Forsberg and Coach Madden’s postgame comments. The win was the first of Madden’s head coaching career.

In the rematch on Saturday, the Monsters scored before some fans probably even sat down as Sifers gathered a loose puck and launched it between two Monsters. Broadhurst gathered the puck and found Palushaj who went backhand to make it 1-0 on the team’s first shot on goal. In the second, Frank Hora launched a puck down the rink with Tynan winning a race to get the puck before firing to make it 2-0. Nine minutes later, two Monsters rookies would pick up their first career points. Jordan Maletta, Justin Scott and Nick Moutrey skated in with Scott passing to Moutrey who passed to Maletta Maletta then passed to Moutrey in front who scored to make it 3-0 before giving an IceHog a shove for messing up his celebration. Three minutes later one time Jacket (in Traverse City) Jeremy Langlois got the Hogs on the board to make it 3-1. Anton Forsberg was solid again making 26 saves. Here are TJ Tynan, Ryan Craig and John Madden postgame comments.

Leading the way this weekend was TJ Tynan who had three points. Alex Broadhurst, Jamie Sifers and Aaron Palushaj were the only other Monsters with multiple points. Anton Forsberg is one of only four goalies with two wins and he has the second lowest GAA of goalies to play in two games.

Kole Sherwood-Flint Firebirds (OHL)
Season Stats 7GP 5-5-10 +4 4PIM
Kole and the Firebirds opened the week against the Memorial Cup host Windsor Spitfires and well, it wasn’t pretty. The Birds let the Spits roar out to a 6-1 lead before Kole found a way to keep his point streak alive. Late in the second, Kole gathered a loose puck from above the circles and fired a shot that trickled past the Spitfires goalie to make it 6-2 in a 7-2 loss.

The next night, on the Firebirds’ Pink in the Rink night, Kole assisted on Luke Kirwin’s first of the night when Everett Clark stole the puck and skated in before dropping the puck to Kole who found Kirwin in front to make it 1-0 in a 5-4 Firebirds win. Kole had his season opening point streak snapped in a 5-3 loss to Barrie. During the six game streak, Kole collected 10 points.

Pierre-Luc Dubois-Cape Breton Screaming Eagles (QMJHL)
Season Stats 1GP 0-1-1 E 2PIM 10/20 50% faceoffs
Before being assigned back to the Screaming Eagles from Columbus, Dubois missed the team’s first game of the week, but he joined the team in Acadie-Bathurst for a game against the Titan. Midway through the third with the Eagles leading 4-3, PLD took a pass and skated in before going backhand. That shot was stopped but he gathered the puck and sent it to the point where ex Jacket prospect Olivier LeBlanc fired a shot that was tipped by Yannik Bertrand to make it 5-3. In the win, Dubois won 10 of 20 faceoffs.

Vitaly Abramov-Gatineau Olympiques (QMJHL)
Season Stats 9GP 4-5-9 -10 8PIM
Vitaly and the piques opened the week in Halifax. With Gatineau trailing by one early, Abramov took a crossrink pass and stick handled before passing to Nicholas Meloche at the point where he skated in and snapped a shot to make it 1-1 in what would end up as a 6-5 overtime loss.

Up next against Charlottetown, Vitaly helped add to the Gatineau lead when countryman Yakov Trenin skated out from behind the net and found Charles-Olivier Ouimet. Ouimet’s shot missed the net, but he gathered the puck and found Abramov in front who had an almost empty net to shoot into. Midway through the third, Abramov struck again when he picked up a rebound and fired to make it 4-3 in a 5-4 overtime win. Ambramov was named third star. (highlights featuring CBJ radio legend George Matthews on the Islanders call)

Next up against Acadie-Bathurst, the Titan rolled out to a 3-0 lead before the Olympiques would strike. In the second period, out of a board battle, Abramov got the puck to Zack MacEwan who hammered a shot to make it 3-1 in a 5-2 loss. Vitaly was held pointless in a 7-1 loss to Rimouski.

Sam Ruopp-Prince George Cougars (WHL)
Season Stats 8GP 1-4-5 +1 4PIM
Sam and his teammates opened the weekend by being shutout by the Everett Silvertips. In the rematch, during the second period, Sam scored his first goal of the season to make it 5-3 in a 6-3 Cougars loss.

Next up against Seattle, Sam was held scoreless in a 3-2 shootout loss. Closing out the weekend against the Blue Jacket jersey look alike Tri-City Americans, Sam picked up three assists in a 5-2 win.

Peter Thome-Omaha Lancers (USHL)
Season Stats 6GP 4-0-0 3.42GAA .888Sv%
Peter and the Lancers loaded up the bus and were off to Fargo, North Dakota for a back to back with the old Ohio Junior Blue Jackets, the Fargo Force. First up on Friday, Peter made what was, at the time, a season high 35 saves in a 5-3 Lancers win.

Kevin Stenlund-HV71 (SHL)
Season Stats 5GP 1-1-2 +3 2PIM
Kevin opened the week by going without a point against Orebro before scoring his first of the season against a fellow CBJ prospect.

In a game against Oscar Dansk and Rogle, early in the first Andreas Borgman sent a cross rink pass to Isac Brannstrom who found Kevin all alone where he fired a shot that snuk past Dansk to make it 1-0 in a 4-1 HV71 win.

Gabriel Carlsson-Linkoping HC (SHL)
Season Stats 8GP 0-2-2 +3 2PIM
Gabriel went without a point in a game against Malmo in which he played 14:18 a 5-3 Lions loss. Up next against Frolunda, in the second with the Lions trailing 1-0, Gabriel got the puck from behind the net and fired a shot that Niklas Bergfors gather on the rebound to make it 1-1 in a 3-2 win.

Elvis Merzlikins-HC Lugano (NLA)
Season Stats 7GP 5-1-1-0 2.67GAA .922Sv%
Elvis and the Panthers had a back to back with EV Zug this week. In the first gaem, Elvis had one of his best showings of the season making 44 saves in a 4-3 overtime win.

In the rematch, Elvis unfortunately went to the other extreme with his worst game of the season making only 33 saves on 38 shots in a 5-0 HCL loss to Zug.

There you have it folks, another week in the world of Blue Jackets prospects. As for next week, I’ll be making my first ever trip to South Bend to see Irish freshman and Jackets prospect Andrew Peeke take on the Penn State Nittany Lions on Saturday night.