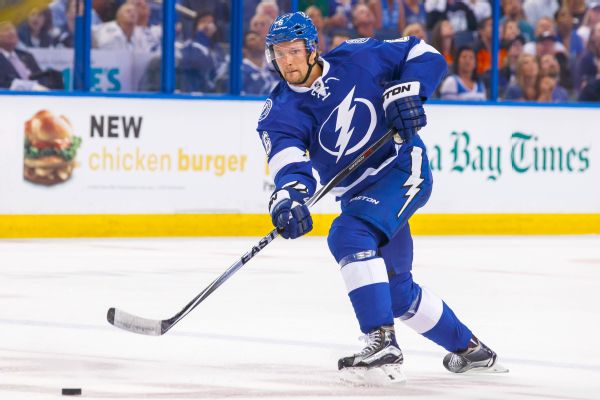 Once criminally underrated, Anton Stralman emerged as a true analytics darling during his time with the New York Rangers. Shortly after, like so many great Rangers of this generation, Stralman made his way to Tampa Bay to become a core member of Steve Yzerman’s hockey machine in Florida.

The Lightning got some of the best years out of Stralman, and see his most recent contract come to an end at a perfect time. Stralman’s play has begun to fall, while Tampa Bay is entering yet another summer cap crunch. The Swede is almost certainly going to be on the move in July, but at 32 is he still worth a top-four spot? Could he help Edmonton?

Stralman’s play began to dip this past season, as his possession numbers fell to career lows and he became a drag on his teammates. At 32, it appears father time has caught up with the Swede. Even on the best regular season team of this decade, Stralman was left behind. As a pending UFA, it makes too much sense for the Lightning to cut bait with him at this point.

If those reasons aren’t enough, then you can just look at the cap situation in Tampa. Stralman made $4,500,000 per year on his last deal, and likely could come close to that on the open market thanks to his name and his history. The Bolts absolutely cannot afford that.

They still have to pay pending RFA Brayden Point a big raise, and must find a way to re-sign Adam Erne and Cedric Paquette. Oh, and the Bolts are reportedly going after Erik Karlsson this summer.

In his best days, Stralman was an absolute force when it came to possession. He was a steady defender that always pushed the puck in the right direction and who always seemed to be in the right position to make a play. He was never an elite offensive producer, but Stralman moved the puck really well and never seemed rushed when transitioning from defense to offense.

He could handle big minutes, helped pushed the puck in the right direction, and played relatively low-event hockey. There was absolutely nothing sexy about his game, but it was damn effective.

Unfortunately, those days appear done. Stralman manged a ghastly 47.4% Corsi For on a Tampa Bay team that dominated possession all season long. Relative to his teammates, Stralman was a drag in this area, posting a -4.1% Corsi For Rel at even strength. (Hockey-Reference)

The points almost all but dried up (2-15-17) and Stralman was relegated to playing just 47 games in a more depth role. He’s simply not the player he once was, and the eye test backed that up in 2018-19.

Stralman, at this point in his career, appears to be a third-pairing defender that can provide a veteran presence. He doesn’t appear capable of handling the big minutes he once did, and at his age he won’t be turning the clock back anytime soon.

In Edmonton, I can see Stralman sliding right in on that third-pairing next to Andrej Sekera. The club would need to move someone like Kris Russell to make it happen, but Stralman could fit on the third-pairing with Sekera if he’s willing to sign a cheaper, short-term deal.

This is a tough one, because NHL teams are known to pay for the past and not the future. Stralman shouldn’t be making anywhere the $4,500,000 he made last season, but it’s also possible a young team desperate to take a leap tries to make a splash and signs him. I’m looking at you Jim Benning.

If you were to tell me in the summer of 2014 that the Oilers should go after Stralman, I’d be all for it. Five years later and Stralman is at the end of his NHL career. He’s no longer that effective top-four defender that helped the Rangers and Lightning contend year after year. He’s a depth piece at best now, and one that appears over-matched most nights.

He’s a bigger name and will generate headlines, but the smart money is to stay away from Stralman this summer.