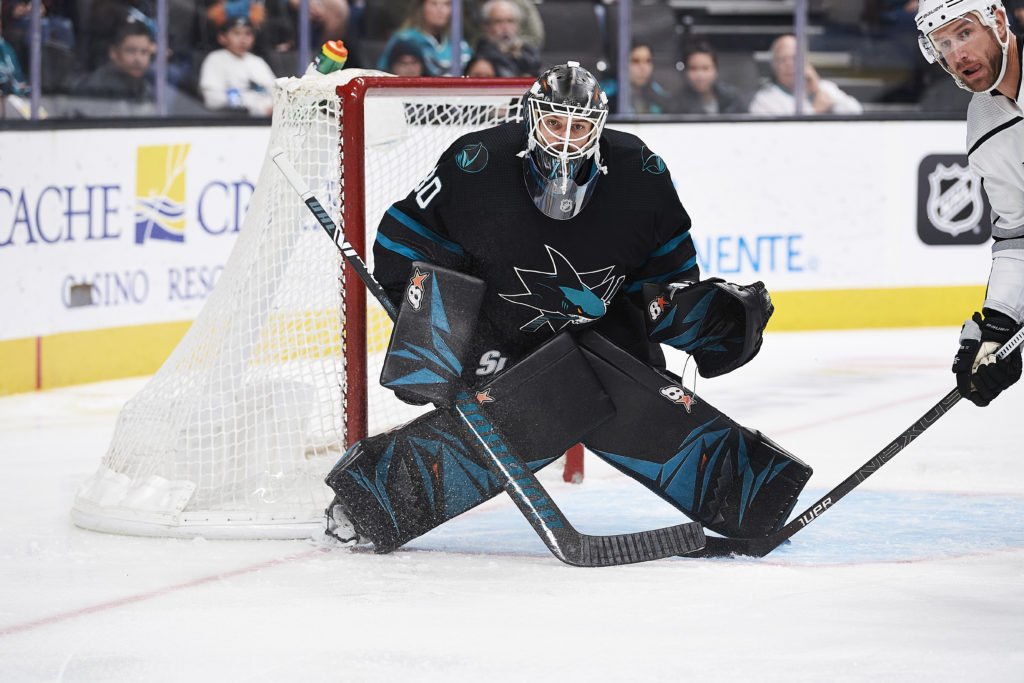 In a flat-cap world, Ken Holland and the rest of the Edmonton Oilers management team will need to get creative. The Oilers are a good team on the rise, but they’ll need help if they hope to take the next step. One area that needs improvement? Goaltending.

Holland is likely to retain Mikko Koskinen, who still has two-years remaining with a cap hit of $4,500,000 and a modified no-trade clause. Veteran Mike Smith, however, is likely to walk. He’s a pending free agent and posted a .902 save percentage in an inconsistent season.

In terms of finding a tandem goaltender, Holland could go one of two ways. He could sign a big name veteran like Braden Holtby or Brian Elliott, or he could sign a lesser name that could be just as effective at a lesser cap hit.

Aaron Dell could be that guy.

The San Jose Sharks, for really the first time in two decades, were a total disaster in 2019-20. The Sharks finished 29-36-5 in 70 games, the worst record in the Western Conference. They also don’t have their first round pick this October (Erik Karlsson trade) and are up against the cap. Oh, and goaltending was an issue for them this past season.

Dell wasn’t the main contributor to that. Martin Jones was. In 41 games, the usually strong Jones posted a save percentage of .896, well below replacement level.

Jones will return in 2020-21, mostly because his overall career numbers are good and he carries a cap hit of $5,750,000 per season. Dell, meanwhile, is a pending free agent.

If the Sharks are going to add an upgrade in goal, it’s going to be on Dell. They’ll bet that Jones can rebound, while adding a safety blanket behind the man they pay to be the starter.

This past season, Dell produced a 50% Quality Start percentage, slightly below the league average of 53%. His Goals Saved Above Replacement was -2.84, while his adjusted GAA was 3.21.

Dell entered the NHL in 2016-17 and was a good to great backup option in each of his first two seasons. Since then? The numbers have dipped, and there is a debate now as to whether or not Dell can be a serviceable NHL goaltender (I think he is). The numbers rebounded a bit in 2019-20, but his five-on-five stats are a reason for concern.

Those concerns are magnified when you consider the Oilers are not a great team at five-on-five, and will need a strong goaltender in that discipline. Dell has not been that guy for two years.

His career workload also indicates that Dell is more backup than tandem option.

Here is a look at Dell’s scouting report via The Sports Forecaster:

Was a very successful goaltender at lower levels. Works very hard at improving his craft. Is positionally sound and quite coachable, too. Owns the right demeanor for a backup netminder at the NHL level. Does not own ideal size (6-0, 205 pounds) for the goaltending position at the National Hockey League level, though his lower base is fairly strong. Can get exposed at the highest level with overuse.

Dell’s career numbers would indicate that he is a backup goaltender at the NHL level. He’s given no signs, to this point, that he is capable of being anything more on a good team. He’s a good option for 25-35 starts, but that’s about it. You need a legit number one in front of him, and the Oilers do not have that guy.

In Edmonton, Dell would be looked at as a tandem goaltender. That would be a risk on Holland’s part. Could it pay off? Absolutely. A look at the numbers indicates that is probably unlikely, however.

Dell carried an AAV of $1,900,000 on his most recent contract, a two-year pact signed on February 28th, 2018. That’s probably the neighborhood he can expect to be in on his next contract.

Aaron Dell is a goalie I have some time for. He played behind a bad Sharks team in 2019-20, and his career numbers indicate he is a solid backup. The issue with him and the Oilers is, quite frankly, the Oilers need more than a backup.

Koskinen is a solid NHL goaltender, but has proven in both of his seasons with the club that he cannot handle the workload that comes with being the undisputed starter. In a tandem role, Koskinen can be an effective option, and is a solid bet for the role in 2020-21.

Dell represents a slight upgrade on Mike Smith. Looking at the number of goaltenders available, the Oilers would be better off aiming a little higher in this deep free agent pool.